Oslomabad is of course, you guessed it, Oslo in Norway, which is sinking in a sea of flames: 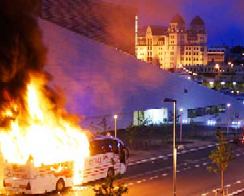 First, a link to Bruce Bawer’sÂ site. He’s talking aboutÂ Dagbladet’sreport on the alarming number of tourist buses being set afire in Oslo (from July 18):

Dagbladet reports that in the last two weeks, eighteen tourist buses in Oslo have been set upon by thieves and vandals.

Official reactions to this latest development only serve to underscore where the roots of the problem lie. You can almost see the spokesman for the Agency for Road and Transport shrugging and yawning as he tells Dagbladet that, well, this sort of this happens every summer, and hey, don’t worry, there’s more and more tourist buses coming to Norway. And the cops? They say that they “can’t see any connection among the events of recent weeks.” A police spokesman told Dagbladet that they hadn’t put the case materials together yet – they’ll get around to that on, oh, Monday.

No, Oslo isn’t Rome or Paris. But not long ago, it was at least a safe, clean city. It’s now rapidly declining into a maelstrom of chaos, crime, and filth under politicians who’ve essentially handed it over to armies of Nigerian prostitutes, gypsy beggars, and Muslim gangsters; who ordered street work that should have been wrapped up months ago but that continues to keep much of the downtown area looking like Berlin in 1946; and who blithely hike subsidies to groups like the Islamic Council while letting the police and military go chronically underfunded.

Well, of course. Who wants to pay a decent wage to those nasty men who protect others when the Islamic Council, peace be unto them, needs funding so desperately?

And the cops? They simply suffer from the same virulent indifference as their superiors. It’s a top-down disease.

Mr. Bawer suggests that tourists re-route to Copenhagen instead.

“My company sends buses all over Europe, but we’ve never experienced anything like this,” bus driver Jorge Muniz Paredes to newspaper Aften. “If I talked about this on Spanish television, people would think I was in Africa.”

Paredes recently found his bus burning near the new Opera House on Oslo’s waterfront. The bus, used to carry Spanish tourists on sightseeing trips in Oslo, was in top condition, he said.

He’s convinced vandals are behind the fire on his bus. Two days earlier, the bus’ windshield had been smashed.

Three Spanish tour bus companies have filed a complaint with Norwegian tourism promoters in Madrid, who in turn have contacted both the Norwegian embassy in Spain and the Spanish embassy in Norway.

Some tour operators are considering dropping Oslo from their tour itineraries. “Oslo’s not a particularly pretty city, like Rome or Paris,” said Paredes. “The only reason we come is because it’s the capital of Norway. The vandalism makes the destination insecure and if this continues, we’ll stop coming.”

But here is the most interesting story from Fjordman’s selection. It lays bare the core of the problem. Olso burns while government strangles its citizens on procedural policies. The pervasive cynicism is heart-breaking.
– – -Â Â – – – – –
Read carefully with attention toÂ what the authorities themselves consider important:

An awkward power struggle has broken out among foreign and local beggars in Oslo, ironically over their street sales of a magazine whose very title calls for more equality in the capital.

Norwegian beggars are getting competition from foreign beggars, and conflicts are breaking out.

The conflict is over who should be allowed to peddle the magazine, which sells for NOK 50. Its sellers can keep half of the proceeds.

The magazine, called “=Oslo” (equal Oslo), was started up to help provide an income source to those who otherwise would beg for spare change on the streets of the capital. Many of its original sellers were Norwegian drug addicts.

Now, however, new groups of foreign beggars want to sell the magazine as well, reported newspaper Dagsavisen earlier this week. The magazine won’t let them, saying the sellers should be Norwegian and must be able to speak Norwegian.

That’s led to protests, and state authorities are investigating whether “=Oslo” is violating anti-discrimination laws. “If we find that ‘=Oslo’ has broken the law, they’ll have to find a new solution for the foreigners,” said Ingeborg Grimsmo, Norway’s acting discrimination ombud.

Why would a magazine originate with the intention of having “beggars” sell their product? It’s insane. Remember when Rudy Giuliani began cleaning up New York City by removing the beggars who were washing car windshields in city traffic?

The problem with “beggars” is that keeping civic order is an on-going problem. Mayor Giuliani solved it in his time, butÂ the squeegee menÂ are making a comeback in The Big Apple and their appearance scares people because of what it represents – erosion of public space. These depredations don’t stay “cured”; they demand vigilance and creative thinking. Neither is in great supply in Norway.

Here’s another problem where the authorities cynically leave in a bind those who would help the hungry:

Thorny issues also have broken out within an Oslo organization that serves the poor and offers them free food (Fattighuset). It has refused to give food to the foreign beggars, claiming that the foreigners try to sell the food on the street.

“We can’t have that,” said Johanna Engen, a board member at Fattighuset, arguing that it defies the purpose of the aid and can threaten donations.

The anti-discrimination authority is investigating whether Fattighuset can legally only give food to poor Norwegians and not poor foreigners. “There are important principles at stake,” Grimsmo said, arguing that the foreigners are becoming “more and more” stigmatized in Norway.

People get “stigmatized” when they consistently operate outside the mores of local culture. Perhaps these “foreigners” of unnamed ethnicity come from a place where ripping off charitable organizations is all in a day’s work.

Fattighuset is absolutely right: letting this go on would threaten donations. But the “anti-discrimination authority” is not concerned with outcomes; it lives for procedures. And by its lights, procedures take precedence over virtue.

When a government – be it local, state, or federal – has that much power over charitable endeavors and it uses that dominance with Kafkaesque indifference, then the government is acting with evil. Indifferent evil, but evil nonetheless.

Fjordman called it a maelstrom of chaos. His powers of perception are acute.