* But not to worry: they’re only a tiny minority of extremists!

* Â From the “My Allah is better than yours” department: 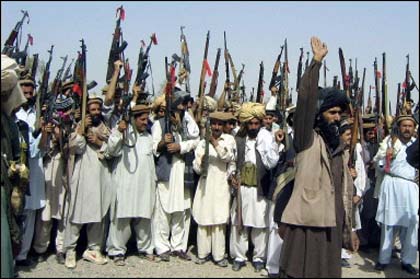 TORONTO, Sept 10, 2008 /PRNewswire via COMTEX/ — On September 8, 2008, in Zila Mir Pur Khas, Pakistan, religious extremists barged into the clinic of Dr. Abdul Manan Siddiqui, and then repeatedly shot him. Dr. Siddiqui died at the scene. The extremists also inflicted serious injuries to a security guard (who is in critical condition), clinic staff member and a patient. This horrific act of terror took place in the Province of Sindh, the home of Pakistan’s new President, Asif Ali Zardari, as well as during Islam’s holy month of Ramadhan.
Dr. Siddiqui was the Vice-President of the local chapter of the Ahmadiyya Community, a long-persecuted religious minority which, in 1974, was declared non-Muslim, and then in 1984, became criminally prohibited from declaring themselves as Muslims and peacefully practicing their Islamic faith, including greeting people and praying in accordance with Islamic custom and practice.
In the days leading to the violent murder, Dr. Siddiqui had received numerous death threats from local religious extremists bent on making him an example of the treatment that they openly advocate be meted out to all members of the Ahmadiyya Community in Pakistan. Dr. Siddiqui was targeted solely on account of his being a leading member of this community. He was 40 years of age and is survived by his wife and three young children.
After receiving his medical education and training in the United States, Dr. Siddiqui opted to return to Pakistan in order to serve the needs of his people. “Dr. Siddiqui strongly believed in serving the poor and the needy, especially in the remotest villages and towns of Pakistan,” said Dr. Aslam Daud, General Secretary of the Ahmadiyya Muslim Community in Canada and a former classmate of Dr. Siddiqui. Dr. Daud added, “While Canada has provided me with a safe place to practice my faith, I am deeply saddened at having to see the ultimate price paid by colleagues who strive to serve humanity in such difficult circumstances.”
“The members of Canada’s Ahmadiyya Community are deeply shocked and disturbed by the targeted killing of its prominent leaders in Pakistan. This campaign of terror is being waged by religious extremists who purport to be the champions of the peaceful message of Islam and the Holy Prophet Muhammad, peace be upon him. Actually, such people bear no relationship with Islam, but rather, are solely bent on forwarding their own violent, cruel and selfish agendas. Every citizen of every civilized nation should condemn such atrocities and demand that the Government of Pakistan prosecute the murderers and ensure the safety of all religious minorities in Pakistan, including the Ahmadiyya Community,” said Lal Khan Malik, President of the Ahmadiyya Muslim Community in Canada.
Throughout Pakistan’s history, but particularly since 1984, countless members of the Ahmadiyya Community have been killed. Yet, police invariably refuse to arrest or lay charges against any perpetrators. To date, no charges have been laid against anyone associated with the murder of Dr. Siddiqui.
“In Pakistan, the streets are never safe as religious extremists freely take the life and liberty of innocent, peaceful and law-abiding citizens without fear of criminal prosecution. The murder of Dr. Siddiqui and others are crimes against humanity,” said Naseem Mahdi, Senior Vice-President of the Ahmadiyya Muslim Community in Canada.
For further information: on the Ahmadiyya Muslim Community Canada visit:www.ahmadiyya.ca;Â orÂ www.alislam.org;