Store owner in West Bank city says ‘We are harassed, but you wouldn’t know the truth. No one says anything publicly about the Muslims’

* This has been going on for a long time…

(IsraelNN.com) The Muslim Fatah-controlled authority in Judea and Samaria is encouraging a “sharp demographic shift” in Bethlehem, where the Christian population went from a 60 percent majority in 1990 to a 40 percent minority in 2000, to about 15 percent of the city’s total population today.

It is estimated that, for the past seven years,Â more thanÂ one thousand Christians have been emigrating from the Bethlehem area annually and that onlyÂ 10,000 to 13,000 Christians remain in the city. International human rights lawyer Justus Reid Weiner, who teaches at Hebrew University, told the Jerusalem Institute for Global Jewish Affairs that, under the PA-Fatah regime, Christian Arabs have been victims of frequent human rights abuses by Muslims.

* Not something that would interest BLiars sister in law, who is currently doing some shopping in Gaza, which, according to her, is worse than Darfur, no: worse than a concentration camp… 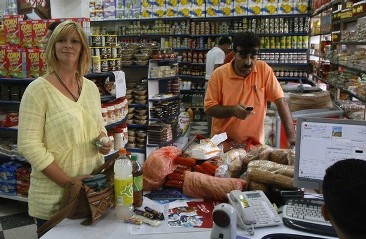 “There are many examples of intimidation, beatings, land theft, firebombing of churches and other Christian institutions, denial of employment, economic boycotts, torture, kidnapping, forced marriage, sexual harassment, and extortion,” he said. PA officials are directly responsible for many of the attacks, and some Muslims who have converted to Christianity have been murdered.

Pastor booted
As people with “dhimmi” status, Christians living in Palestinian-controlled territories are not treated as the equals of Muslims. He says: “They are subjected to debilitating legal, political, cultural, and religious restrictions. This has become a critical problem for the Palestinian Christians in the West Bank and Gaza. Muslim groups like Hamas and Islamic Jihad have built a culture of hatred upon the age-old foundations of Islamic society. Moreover, the PA has adopted Islamic law into its draft constitution.”

In 2006, Hassan El-Masalmeh, a member of the Bethlehem City Council and local Hamas leader, publicly advocated implementing a discriminatory tax on non-Muslim residents. In late 2007 an evangelical pastor was forced to leave Ramallah under threats from Fatah gunmen, and soon after, his congregation dispersed.

“Tens of thousands of Palestinian Christians have left their ancestral homes and emigrated to North America, Central America, South America, Europe, and Australia. They flee to almost any country that will issue them a visa,” Weiner said. “Neither the Palestinian Christian leaders nor the PA want to reveal accurate statistics. That would mean the extent of the emigration would become publicly known. They would then have to face questions about the reasons for this decline.”

“It is currently estimated that the number of Christians living in Gaza totals only 1,500-3,000 amid 1.2 million Muslims. Probably less than fifty thousand Christians remain in all of East Jerusalem, the West Bank, and Gaza together,” he estimated. “Taybeh, a village located deep in the West Bank, is the only all-Christian village left in the PA. As a result of the perpetual violence, many residents of Taybeh have gone abroad and only 1,300 remain. The situation of these Christians has become grim.”

Kidnapping of Christian Women
“Incidents of Muslim men ‘seducing’ or kidnapping Christian girls have caused growing anxiety among the Christian population. In May 2004, a sixteen-year-old Christian girl from Bethlehem, who was a U.S. citizen, went missing for five days after being kidnapped by a 23 year-old Muslim. ” The girl’s family contacted the American Consulate in Jerusalem, and it was only thanks to their intervention that she was rescued and left with her family for the United States. The episode received virtually no international media coverage.

In another case, a Muslim family appeared uninvited on the doorstep of a wealthy Christian family in Judea and Samaria and demanded that the Christian family’s daughter, known for her beauty, marry their son. Their son was already dressed up for his wedding, accompanied by the sheikh and fifteen Muslim men. To protect his family the Christian girl’s father opened fire on the Muslim entourage, killing three and wounding ten. The girl’s family immediately abandoned their home and fled abroad.”

Converts targeted
The PA was involved in the torture of two Muslim brothers from Samaria who adopted the Christian faith.

The first brother was arrested by the PA secret police and accused of collaborating with Israeli and American intelligence. After the interrogation the police placed a cardboard sign on his back upon which was written, ‘Najib the Christian.’ Then he was told to ‘curse Jesus.'” He eventually made contact with Israelis who arranged for him to hide in a bomb shelter in a JewishÂ community and was finally granted asylum in Norway.

His brother spent 21 months in a PA prison after being arrested on fabricated charges. He was held for seven months in underground solitary confinement. Weiner quotes his testimony before him thus: “I was beaten with sticks; they stripped me naked and made me sit on bottles, and on the legs of chairs that they turned upside down, and many, many other sadistic things that I am even ashamed to say. Many times they allowed lynch mobs like the Al-Aksa Brigades to come in and pull prisoners out of the cells. They were taken out and shot on the spot, their bodies then dragged through the streets for all to see.”

Medieval torture
The young man was sentenced to be executed but was liberated from prison by the Israel Defense Forces. He lives in Israel but his wife and eight children remained behind and are under constant threat of harassment. He hopes to find asylum in Norway.

Another Christian convert, El-Achwal, was initially arrested on fabricated charges of stealing gold. He was kept in a tiny cell and regularly left without food or water for days on end. The torture he sustained during the interrogation required lengthy hospitalization.Â  Weiner, who interviewed El-Achwal, said Ahmed “had suffered extensive and serious burns on his back, buttocks, and legs. The heated torture implement that was applied to his skin reminded me of similar medieval instruments.” He was eventually freed but refused to renounce his Christian faith. One day he was beaten by a group of masked men affiliated with the PA security services, who also torched his car. His residence was firebombed and on January 21 2004, he was shot dead by masked gunmen who have never been arrested.

Despite all of this, Weiner says, American Episcopalians and Presbyterians frequently blame Israel for the Middle East conflict.Â Leaders of other North American churches including the Methodists, the United Church of Christ, and the Lutherans “have also gone to great lengths to offer up one-sided condemnations of Israeli policies.”