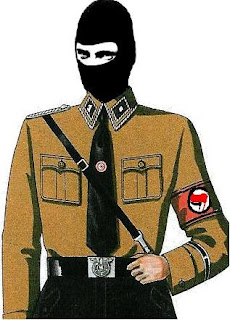 Some of the counter-demonstrators lunged for officers’ pistols while others threw stones and firecrackers. The injured officer was hit by a firecracker. Police said they detained about five people.

Police forced the Pro-Cologne nationalist group to call off the rally because there were fears that more serious violence would take place, police spokesman Burkhard Rick said.Â About 3,000 officers had been deployed to keep peace between the two groups.

“The security of citizens of Cologne has top priority,” Rick said.

The Pro-Cologne group had planned to rally against what it calls the “Islamification” of the ethnically diverse city.Â Organizers had hoped to criticize plans to build a large, domed mosque – complete with two 55-meter-tall minarets – in Cologne’s Ehrenfeld district.

But by midday just 30 Pro-Cologne supporters had managed to reach the rally site, aÂ marketplace near the city center, as thousands of counter-demonstrators blocked streets leading to the square.

Some 5,000 more counter-demonstrators attended a peaceful rally nearby.

Saturday was the second of the three-day conference that Pro-Cologne billed as an attempt to build a “European, patriotic, populist right-wing movement.” The group had invited members of nationalist parties from other European nations to attend.

Opening events Friday were severely hampered when hundreds of largely peaceful protesters managed to prevent the group’s leaders from holding a news conference in a municipal building, forcing Pro-Cologne’s supporters to seek refuge on a rental boat cruising the Rhine River. Eight people were arrested for throwing stones and paint balls at the boat.

An estimated 120,000 Muslims live in Cologne, widely viewed as one of Germany’s most tolerant and well-integrated major cities. * Â Delusional: “Israel’s aggressive settlement policy is the problem! Why does the UN not take action?”

UPDATE:Â The Brussels Journal:Â Cologne Gives In to Violence after Mayor Calls for Intolerance

“Hi my dear Germans,Â It is pity that most of you do not have a clue what democracy and freedom mean. The entire press and all the politicians seem to be very happy that violent thugs can impose their will. I can only despise your lot, from taxi drivers to hotel owners to police officers to politicians.”

Comments such as these seem to be beyond the bounds, even for a conservative newspaper like Die Welt.

Newspaper Die Welt put up an online poll asking their readers whether they thought it was OK to to ban the anti-Islamization demo.Â As of midnight yesterday, 86% disagreed with this policy. Suddenly, in the middle of the night, thousands of new votes miraculously came in and the vote ended with exactly 50% in favor of the ban.

Strange, huh? At least, that’s what the same blogger claims. He links to this story fromÂ Politically Incorrect, but my German is a bit rusty

Â Â -Â A Sermon for the WestÂ Oriana Fallaci

On October 22, 2002, Oriana Fallaci addressed an audience at theÂ American Enterprise Institute.Â Following are short excerpts from her talk. Ms. Fallaci, a native of Florence, Italy and a life-long journalist, caused turmoil across Europe with the publication of her book The Rage and the Pride, calling the West to stand up to the Islamic world.

I don’t hide. I never have. I stay at home because I like to stay at home, and at home I work. I have not appeared in public for at least ten years. No interviews, no TV.

Why am I here, then? Because, since September 11, we are at war. Because the front line of that war is here, in America. Because when I was a war correspondent, I liked to be on the front line. And this time, in this war, I do not feel as a war correspondent. I feel as a soldier. The duty of a soldier is to fight. And to fight this war, I deploy a personal weapon. It is not a gun. It’s a small book, The Rage and The Pride.

My soldier weapon is the weapon of truth. The truth that begins with the truth I maintain in these pages:

From Afghanistan to Sudan, from Palestine to Pakistan, from Malaysia to Iran, from Egypt to Iraq, from Algeria to Senegal, from Syria to Kenya, from Libya to Chad, from Lebanon to Morocco, from Indonesia to Yemen, from Saudi Arabia to Somalia, the hate for the West swells like a fire fed by the wind. And the followers of Islamic fundamentalism multiply like a protozoa of a cell which splits to become two cells then four then eight then sixteen then thirty-two to infinity. Those who are not aware of it only have to look at the images that the TV brings us every day. The multitudes that impregnate the streets of Islamabad, the squares of Nairobi, the mosques of Tehran. The ferocious faces, the threatening fists. The fires that burn the American flag and the photos of Bush.

“The clash between us and them is not a military clash. Oh, no. It is a cultural one, a religious one. And our military victories do not solve the offensive of Islamic terrorism. On the contrary, they encourage it. They exacerbate it, they multiply it. The worst is still to come.”

President Bush has said, “We refuse to live in fear.”

Beautiful sentence, very beautiful. I loved it! But inexact, Mr. President, because the West does live in fear. People are afraid to speak against the Islamic world. Afraid to offend, and to be punished for offending, the sons of Allah. You can insult the Christians, the Buddhists, the Hindus, the Jews. You can slander the Catholics, you can spit on the Madonna and Jesus Christ. But, woe betide the citizen who pronounces a word against the Islamic religion.

My small book is not tender with Islam. In certain passages, it is even ferocious. But it is much more ferocious with us: with us Italians, us Europeans, us Americans.

I call my book a sermonâ€”addressed to the Italians, to the Europeans, the Westerners. And along with the rage, thisÂ  sermon unchains the pride for their culture, my culture. That culture that in spite of its mistakes, its faults, even monstrosities, has given so much to the world. It has moved us from the tents of the deserts and the huts of the woods to the dignity of civilization. It has given us the concept of beauty, of morals, of freedom, of equality. It has made the unique conquest in the social field, in the realm of science. It has wiped out diseases. It has invented all the tools that make life easier and more intelligent, those tools that our enemy can also use, for instance, to kill us. It has brought us to the moon and to Mars, and this cannot be said of the other culture. A culture, which has produced and produces only religion, which in every sense imprisons women inside the burkah or the chador, which is never accompanied by a drop of freedom, a drop of democracy, which subjugates its people under theocratical, oppressive regimes.

Socrates and Aristotle and Heraclitus were not mullahs. Jesus Christ, neither. Leonardo da Vinci and Michaelangelo, and Galileo, and Copernicus, and Newton and Pasteur and Einstein, the same.

My book is also a j’accuse. To accuse us of cowardice, hypocrisy, demagogy, laziness, moral misery, and of all that comes with that. The stupidity of the unbearable fad of political correctness, for instance. The paucity of our schools, our universities, our young people, people who often don’t even know the story of their country, the names Jefferson, Franklin, Robespierre, Napoleon, Garibaldi. And no understanding that freedom cannot exist without discipline, self-discipline.

Well, I have not. I boil with passion. I, too, am ready to die for passion. But around me, I see no passion. Even those who hate me and attack me and insult me do this without passion. They are mollusks, not men and women. And a civilization, a culture, cannot survive without passion, cannot be saved without passion. If the West does not wake up, if we do not refind passion, we are lost.

To quote from my book:

“The problem is that the solution does not depend upon the death of Osama bin Laden. Because the Osama bin Ladens are too many, by now: as cloned as the sheep of our research laboratories…. In fact, the best trained and the more intelligent do not stay in the Muslim countries… They stay in our own countries, in our cities, our universities, our business companies. They have excellent bonds with our churches, our banks, our televisions, our radios, our newspapers, our publishers, our academic organizations, our unions, our political parties…. Worse, they live in the heart of a society that hosts them without questioning their differences, with- out checking their bad intentions, without penalizing their sullen fanaticism.

3 thoughts on “Hey Fritz: "Kill unbelievers wherever you find them" means you too!”