Not German:  The “German man” turns out to be a Turkish Muselmaniac who managed to settle in Germany, with his Turkish wife. Thanks to allah and his profit Muhammad, he decided his Nail Bomb Would ‘Kill Many People’…

Spiegel, couple arrested. They were about to kill many people. Thanks to the Religion of Peace: 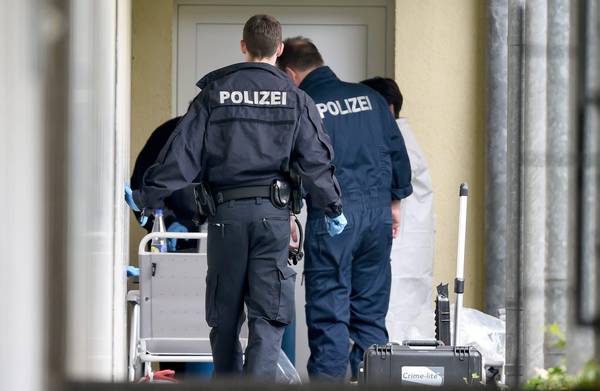 (ANSA) – BERLIN – The bomb experts of the German police found in an Islamic couple’s flat – both were arrested in late April in Oberursel, near Frankfurt – was filled with nails. The news is reported by the German weekly ”Der Spiegel”, underlining that the bomb would have killed many people, if it had been detonated even at some distance from where it exploded. The arrested couple – a Turkish-German man, 35 yo, and his Turkish wife, 34 yo, parents of two children aged 2 and 4 – allegedly planned to explode the bomb along the bike route of a cycling race for professionals and amateurs scheduled for May 1. For security reasons, despite the arrests, the local authorities had imposed the cancellation of the race: it was still unclear whether some accomplices would be ready to strike again. In the flat seized by police, in addition to the bomb, parts of an assault rifle, ammunition, chemical agents and 24,000 euro were found. The arrested man’s father, interviewed by Der Spiegel, has reacted with ‘incredulity’: according to him, his son had urged him to go more often to the mosque, but he did not have any warning sign. ”He has a happy family, happy children, he used to attend the mosque. Why should he put his family’s happiness at risk?”, the man said. (ANSA).

Top Muslims: ‘terrorism not a topic for talks’ Â (The Local)

Beautiful. Muselmaniacs get to decide the topic of discussion, which means they will entertain us with their usual grievance theatre and demand the jiziya, to be paid with willing submission.

Since 2006, the German government forces Â the so-called ‘Islam-conference’ on recalcitrant Muslim ‘leaders’, Â who appear, make their demands and leave without ever conceding anything to the frustrated kafirs. Islam-critics, the Â remaining few who muster enough courage to speak out against the criminal aggression of the Mohammedans, Â are shouted down by Â the support industry of dhimmies and fellow travellers, and usually the soldiers of Allah go home with more jiziya and concessions for their grievances. A pathetic, degenerated circus of vanities without principles or morality.

Â Muslim leaders criticized on Saturday the agenda of the German Islamic Conference taking place next week. They do not want terrorism as a key subject, nor Islam critics to attend, theÂ SÃ¼ddeutsche ZeitungÂ reported.
.
They are also unhappy that the entire agenda has been drafted by the interior ministry. The event, which debuted in 2006 with the proposed aim of promoting dialogue between the government and Muslim communities, has witnessed a loss of support over stalled talks and lack of progress.
END_OF_DOCUMENT_TOKEN_TO_BE_REPLACED

BCF wants to know if this guy is the dumbest bishop in Germany. Is he?

A Catholic bishop has called for a blasphemy law in Germany, saying all religions deserved legal protection from attack in order to preserve human dignity.Â

Soldiers of allah douse a Coptic Christian in Egypt with petrol and burn him alive……
.
How are unworthy sons of apes and swine to dispose of the Muslim ‘holy book’ without Â hurting the feelings of 1.5 gazillion muslims around the world who would then have no other choice but to wage holy war and murder every infidel in sight?
.
The Gates of Vienna informs us that the infidel German masses are being duly instructed on Â the Proper Disposal of a Free Koran
.

WeÂ reported last weekÂ on the proposal by an Islamic fundamentalist in Germany to distribute 25 million free German-language Korans to the non-Muslim populace.Imagine that you’re one of the unwitting recipients of a free Koran, dropped with aÂ clunkÂ through your letter box early one morning. You take a quick look at the book. It’s boring, turgid, and incomprehensible. You don’t want it.But how should you dispose of it? You’ve heard on the news about what happens to non-Muslims who burn the Koran, or throw it in the garbage, or flush it down the toilet. You don’t want to share their fate.

So what’s the solution? Bury it in the back yard? Hand it over to the police?

That’s what’s being discussed in Germany right now. Many thanks to Hermes for translating this article from yesterday’sÂ Die Welt:

END_OF_DOCUMENT_TOKEN_TO_BE_REPLACED

The justice minister in the state of Rhineland-Palatinate has sparked outrage after proposing that Germany could permit Sharia courts, which operate according to Islamic law, to preside over some civil cases in the country.

A commenter nails it:

At some point, cultural understanding and cultural treason intersect. Jochen Hartloff is standing in the middle of this intersection and if he doesn’t get run over by freedom loving people, he will ultimately get run over my some Imam on the way to his Sharia court… which will then charge Hartloff for being a heathen who deserved to be run over for standing in the road in the first place.

Mediating disputes is an age-old tradition in the Arab world, which is also practiced in Germany. But experts warn of the danger of a parallel, Muslim judiciary.

They do not wear black robes and most have not studied law at a university. Muslim arbitrators, also called justices of the peace, do not work in courts or law firms. Some are imams, who adhere to Sharia tradition. They act as a mediator in marriage and other family disputes. In an ideal world, they manage to de-escalate the situation and prevent further disputes.

END_OF_DOCUMENT_TOKEN_TO_BE_REPLACED

All your infidel churches are belong to us:

Thanks to KGS & the Tundra Tabloids

Beats me why the Germans put up with this, why they even allow him back into the country. Smells like deep rooted dhimmitude:

Turks in Germany: The Guests Take Over the House

Turkish Prime Minister Recep Tayyip Erdogan was in Germany on November 1 and 2 to mark the 50th anniversary of a German-Turkish agreement on guest workers.

Erdogan turned what was supposed to be a friendly photo opportunity into a platform from which toÂ launch a fresh tiradeÂ against Berlin for a long list of perceived slights and shortcomings in its treatment of the estimated 3.5 million Turkish immigrants who now live in Germany.

Erdogan said Germany’s insistence that immigrants who want to live in Germany must learn the German language is “against human rights.” He also demanded that Berlin grant German citizenship to Turkish immigrants regardless of the efforts they make to integrate into German society.

For good measure, Erdogan accused Germany of being “an accessory” to the terror campaign launched by the Kurdistan Workers’ Party (PKK) in Turkey. He also blamed Germany for derailing Turkey’s decades-long bid to join the European Union.

Adding to the controversy, a group of German scientists, politicians and human rights activists greeted Erdogan’s visit to Germany byÂ filing a war crimes complaint against the Turkish prime ministerÂ and nine other senior Turkish political and military officials.

Turkey: Non-Muslims protest special tax from which Muslims are exempt

“Fight those who believe not in Allah nor the Last Day, nor hold that forbidden which hath been forbidden by Allah and His Messenger, nor acknowledge the religion of Truth, (even if they are) of the People of the Book, until they pay the Jizya with willing submission, and feel themselves subdued.” — Qur’an 9:29

Under heavy pressure from the European powers, the Ottoman Empire abolished the payment of the jizya, which is the cornerstone of the system of dhimmitude, in the 1850s. But even the secular Turkish state found a way to reestablish it under another name. As the Islamization of Turkey continues to advance, eventually this pretense will no longer be needed.

Other news from Turkey:

END_OF_DOCUMENT_TOKEN_TO_BE_REPLACED

Berlin to appoint imams to teach Islam in schools

BERLIN – The German Minister of Education Annette Schavan wants imams teach courses in Islamic religions in schools, in an interview with the weekly Die Zeit to be published Thursday.

Beyond parody. Cry me a river:

A German Muslim leader on Saturday called for better protection of mosques across the country in the wake of the latest arson attack on Berlin’s largest mosque, IRNA office in Berlin reported.

Talking to reporters, the Chairman of the Central Council of Muslims Aiman Mazyek said, “Rarely does a week go by without an attack on a mosque.” “The current terror hysteria exacerbates this climate … and strengthens those people who plans such attacks,” he added.

Mazyek was referring to Friday’s arson attack on the Sehitlik mosque, the fourth of its kind on the worshipping house over the past six months. (Bunglawussi Watch)

Terror Warnings ‘Should Not Be Politically Abused’

Security in Germany has been ramped up following this week’s terror warning from Interior Minister Thomas de MaiziÃ¨re. So too has the political rhetoric. German commentators say that politicians should be ashamed for trying to take advantage of heightened anxiety in the country.Â  (Spiegel Online)

“Enjoy your stay in Germany….”

Europe is currently threatened with a wave of refugees from Afghanistan. After years of tolerating refugees who have not been granted political asylum, German authorities have started deporting Afghan nationals in an effort to deter others from coming to the country. By Conny Neumann more… [Â Forum ]

Bollywood Star Shah Rukh Khan is shooting an action film in Berlin this fall, partly financed with German movie subsidies. The city is hoping that its investment and the role it will play in the film can help make the city a destination for Indian tourists. By Alexander KÃ¼hn more… [Â Forum ]