* Â But not to worry: they’re only a ‘tiny minority of extremists’- right?

* Joe Biden has the answer:Â US to triple aid to Pakistan 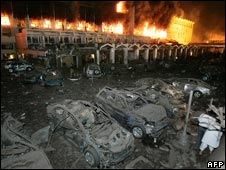 The bomb created a massive crater in front of the hotel

“[The] Saturday blast, which reverberated throughout Islamabad, was caused by more than a ton of explosives. … The blast left a crater some 30 feet deep in front of the main building.”

CNN reporters two miles away claim that the blast was so big that it shook their offices and sounded like the explosion was just outside.Â

* To put the explosion into context read Hitchens’ article:Â Pakistan is the Problem.

ISLAMABAD, Pakistan – Police say at least 40 people have died in a massive explosion that destroyed the luxury Marriott Hotel in Pakistan’s capital.

He said that the Saturday blast, which reverberated throughout Islamabad, was caused by more than a ton of explosives.

The blast left a crater some 30 feet deep in front of the main building.

Flames poured from the windows of the hotel and rescuers ferried a stream of bloodied bodies from the gutted building. […]

The Marriott is a favorite place for foreigners to stay and socialize in Islamabad, despite repeated militant attacks. A security guard at the scene, Mohammad Nasir, and several witnesses said a large truck had driven toward the gate before exploding.

The blast left a vast crater, some 30 feet deep in front of the main building, where flames poured from the windows and rescuers ferried a stream of bloodied bodies from the gutted building.

Mohammad Sultan, a hotel employee, said he was in the lobby when something exploded, he fell down and everything temporarily went dark.

“I don’t understand what it was, but it was like the world is finished,” he said.

An Associated Press reporter counted at least nine bodies scattered at the scene. Scores of people, including foreigners, were running out â€” some of them stained with blood. At a hospital where many of the casualties were taken, official Raja Ejaz said at least two people had died and 25 were wounded.

Ambulances rushed to the area, where a fire burned, smoke hovered and the carcasses of vehicles were thrown about. Windows in buildings hundreds of yards away were shattered.

There was no immediate claim of responsibility for the blast. […]

In January 2007, a security guard blocked a suicide bomber who triggered a blast just outside the Marriott, killing the guard and wounding seven other people.

It appeared to be a message sent from Hell. The massive blast was heard 15 kilometres away.

Eyewitnesses have told the BBC that a vehicle crashed through the security barriers in front of the Marriott Hotel in Islamabad.

The 290-room building was the scene of total carnage as the blast ripped into its facade, destroying everything in its path.

The Marriott is just a half kilometre from Pakistan’s national parliament and the residence of the prime minister.

Security sources believe these were the preferred targets, but the bomber (or bombers) was deterred by a huge security presence around those buildings.

At the time of the attack, President Asif Zardari, Prime Minister Yousuf Raza Gilani and many members of parliament were having dinner at the prime minister’s residence.

If the attack had hit that target, the consequences could have been unprecedented in Pakistan’s history.

I have seen bomb wreckage in many places in Pakistan, but I have never seen anything on this scale.

Even half a kilometre away, you find yourself treading on bits of the building and pieces of trees.

Within a radius of 200 metres of the hotel, the destruction was total. The cars that had been parked across the road and the trees lining the main road were in pieces.

A film of glass, metal, broken branches and oil covered the road as I walked up to the hotel.

Here and there, blood had splattered on the footpath as it dripped from the dead and injured being carried out of the building.

Ambulances rushed in and out of the double avenue, sirens blaring, carrying the injured away to the increasingly crowded hospitals. From the main road, the lower part of the building was no longer visible. Large chunks of concrete which had been ripped out by the ferocity of the explosion blocked the view.

Eyewitnesses say the huge lorry rammed through the security barrier at this point.

Something was seen being ignited on the back of the lorry – and then there was the blast.

“I was in the lobby when the blast happened,” Sultan Ahmed, a hotel employee, told the BBC. “I was just walking to the lifts when I was lifted up and slammed into the wall.”

He says he was knocked out, but soon came to and dragged himself out of the hotel.

But many others were not so lucky. I saw six bodies being dragged out of the debris, most with multiple wounds.

Women were crying openly as grim-faced men consoled them.

The Marriott Hotel is one of Islamabad’s landmarks, a symbol of wealth and prestige. It is a favourite with foreigners, particularly westerners.

Emergency workers say that many people could be trapped on the upper floors of the building. But for a long time, fire fighters were unable to get anywhere near the inferno, which was fuelled by burst gas pipes.

Although the gas was eventually shut off, the fire continued unabated.

The rescue work was also hampered by large cracks on the inside and outside of the building. At one point workers and policemen rushed out, fearing the building was falling down.

Army engineers were called in to handle the situation.

There has been no claim of responsibility so far. But the key suspects are the Pakistan Taleban, operating out of the north-west of the country.

That the attack happened within hours of President Zardari’s inaugural address to parliament is seen as no coincidence.

In the address, Mr Zardari said Pakistan stood ready to face its challenges in the ‘war on terror’.

He reiterated that the state would only talk to those who lay down their arms and stopped targeting security forces and government installations.

But the militants apparently had other ideas, launching the most devastating attack ever to take place in the capital.

The target, even if it was secondary, was a symbolic one. Government ministers often rubbed shoulders with foreign diplomats there. It was popular with the foreign press too, not least because it is one of the few places in Islamabad where you can drink alcohol.

That it now lies in ruins is testament to the unequivocal message that the perpetrators meant to send.

There will be no laying down of arms or any surrender or change of heart.

Last May, the top commander of the Pakistan Taleban, Baitullah Mahsud, had this to say when he spoke to the BBC: “We do not expect the new government to change anything. But we will fight it, every way we can and if we are not safe in our homes, neither will they be.”

‘They’ has now come to signify ordinary Pakistanis and that shift speaks volumes of how this war has changed in character.

It is no more a stop-start battle of wavering ideals. It is now, without doubt, a battle to the death for the soul of Pakistan.