* Damn those infidel sons of apes and swine! 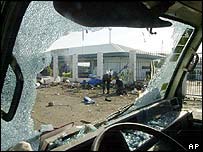 * Sure thing. As if Muslims showed ever showed respect to other peoples cultural and religious symbols. When did they ever care when their bombs go off in churches, temples, synagogues or even other mosques? Like here or here or here (and that’s just from today!)

Army Lt. Col. Roland Bautista, spokesman for the Army’s 10th Infantry Division, which has jurisdiction over Sarangani, denied the allegation.

He said two soldiers were wounded in the clash with about 100 rebels.Â

Hundreds of civilians and non-combatants fled to safer areas.