With thanks to TundraÂ Tabloids:

* Ihsanoglu, Islam’s emissary in charge of ‘Islamophobia’ and censorship, is tirelessly advocating islamic causes in the lands of the infidels, which must be brought under Islamic rule. Ishanoglu, right hand man for Islamist and Turkish PM Erdogan, Â represents the worlds largest lunatic asylum (the words of Pat Condell) which is Saudi Arabia. This account fromÂ TundraÂ Tabloids should be a nail in the coffin of this ridiculous organization. But with all the money the Saudi’s throw at it we are likely to be subjected of more of his efforts, which are all designed to bring us into the fold of Islam: 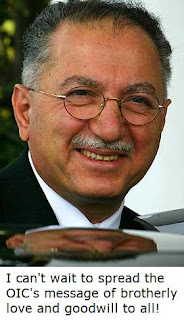 The Organization of the Islamic ConferenceÂ (OIC) is coming to town, to Helsinki Finland that is, under the guise of discussing Islam’s contributing role to Europe, and how best to ease the tensions that exist in Europe between its Muslim and non-Muslim communities.
The Tundra Tabloids of course has an immediate response, but it will be placed further down below. The TT received this piece of informative news in an email yesterday, fromÂ Vasarahammerconcerning the seminar set to take place this next Tuesday in Helsinki.
The Sec-Gen of the Sharia driven OIC is going to show us all how best to get along, but ifÂ past speeches are any indicator(25.09.08), then those attending should get ready for a steaming plate of taqiyya to be handed to them.
Email reads:Â “Islam has been a major religion in many parts of Europe since its earliest days, meaning that Muslim communities are long standing members of the wider European community. But today, due to fears over terrorism, security and immigration, European Muslims are facing mounting hostility. What can be done to counter this situation? Can a dialogue between cultures alleviate the fears of Muslims and non-Muslims in Europe?”
Well for starters:
One could easily highlight the inconsistencies and hypocrisy in his recent speech about “peace and understanding” given at Columbia University, that both Islam and the OIC are said to be promoting. Though the Gen-Sec paints the OIC as an organization that promotesÂ peace and harmonyÂ between Islam and the West, there are however, OIC member states -most notably Saudi Arabia, where the OIC’s headquarters is located– that are engaging in activities that only serve to highlight the OIC’s hypocrisy and counter productiveness.
For an example of how Muslim states seek to sow unrest in Europe’s own Muslim communities, look no further to the OIC’s Sec-gen own fellow countryman and coreligionist,Â Recep Tayyip Erdogan:
“The mosques are our barracks, the domes our helmets, the minarets our bayonets and the faithful our soldiers“
Who also saidÂ to Germany’s 2.5 million Turkish immigrants that:
“assimilation is a crime against humanity.”
Holland:Â “The Christian Democrats, Labor Party and the Liberals have expressed their disapproval of statements made by Moroccan Minister Mohammed Ameur. The minister had said that Moroccans abroad belong to the 17th province of the Kingdom of Morocco, and that the Moroccan government would strengthen its ties with Moroccans abroad by promoting Arab culture.
Former Dutch Minister Henk Kamp (Liberals) said that this attitude hampers the Dutch interest in integrating the 330,000 Moroccan immigrants better into life in the Netherlands. A few days earlier there had been criticism by Ella Vogelaar, Minister of Integration, about similar statements made by the Turkish Prime Minister Erdogan.
OIC member states are contributing to the increased lack of desire by Europe’s Muslims to intergrate into society. Also, lets be clear, Sharia law is an inhumane and highly antidemocratic system of jurisprudence. OIC bathes itself in Sharia law, read the two articles from the Cairo Declaration:
Article 24 statesÂ “All the rights and freedoms stipulated in this Declaration are subject to the Islamic Sharia.”
Article 25Â follows that with “The Islamic Sharia is the only source of reference for the explanation or clarification of any of the articles of this Declaration.“

Starting from that perspective, anything the OIC says or does must be judged under that rubric.
1.) Modernist Muslims, many of whom have fled the Islamic Middle East because of persecution directly resulting from rural and state sanctioned sharia law, now find themselves increasingly in situations, here in Europe, from which they fled.

2.)Â European JewsÂ are feeling the brunt ofÂ Islamist extremism, which is directly and indirectly being funded by OIC member states through their Dawa (Islamic outreach programs) that are helping to spread a purist version of IslamÂ in mosquesÂ andÂ in prisonsÂ all over Europe.
3.) Christian ArabsÂ are being persecutedÂ and are fleeing the Islamic Middle East like never before, the only area in which their numbers have remained stable, or increasingÂ is in Israel.
4.) OIC member states allow their media, political and religious leaders to disseminateÂ the most vile anti-SemitismÂ seen since the days of National Socialism in Germany in the 30, and 40’s, supported by state funding. It’s no accident that Mein Kampf, and the highly discredited Protocols of the Learned Elders of Zion enjoy wide publication in the Islamic Middle East, as well as Holocaust denial.
While Ekmeleddin Ihsanoglu may speak of Islamic self criticism, yet the OIC remains noticeably mute about these serious issues, but are very vocal about protecting Islam from any kind of criticism that all other ideologies are subjected to here in the West. I wonder what Professor Ekmeleddin Ihsanoglu would say to that?

* Is somebody waking up?

The presidential candidates should be asked what they think about this. “U.N. Anti-Blasphemy Resolution Curtails Free Speech, Critics Say,” by Jennifer Lawinski forÂ FoxNews, October 3:

Religious groups and free-speech advocates are banding together to fight a United Nations resolution they say is being used to spread Sharia law to the Western world and to intimidate anyone who criticizes Islam.The non-binding resolution on “Combating the Defamation of Religion” is intended to curtail speech that offends religion — particularly Islam.

Pakistan and the Organization of the Islamic Conference introduced the measure to the U.N. Human Rights Council in 1999. It was amended to include religions other than Islam, and it has passed every year since.

In 2005, Yemen successfully brought a similar resolution before the General Assembly. Now the 192-nation Assembly is set to vote on it again.

The non-binding Resolution 62/145, which was adopted in 2007, says it “notes with deep concern the intensification of the campaign of defamation of religions and the ethnic and religious profiling of Muslim minorities in the aftermath of 11 September 2001.”

It “stresses the need to effectively combat defamation of all religions and incitement to religious hatred, against Islam and Muslims in particular.”

But some critics believe the resolution is a dangerous threat to freedom of speech everywhere.

The U.S. government mission in Geneva, in a statement, told the U.N. Human Rights Council in July that “defamation-related laws have been abused by governments and used to restrict human rights” around the world, and sometimes Westerners have been caught in the web.

Critics give some recent news events as examples of how the U.N. “blasphemy resolution” has emboldened Islamic authorities and threatened Westerners:

— On Oct. 3 in Great Britain, three men were charged for plotting to kill the publisher of the novel “The Jewel of Medina,” which gives a fictional account of the Prophet Muhammad and his child bride. FOXNews.com reported U.S. publisher Random House Inc., was going to release the book but stopped it from hitting shelves after it claimed that “credible and unrelated sources” said the book could incite violence by a “small, radical segment.”

— An Afghan student is on death row for downloading an article about the role of women in Islam, FOXNews.com also reported.

— In December 2007 “a court reportedly sentenced two foreigners to six months in prison for allegedly marketing a book deemed offensive to Aisha, one of the Prophet Muhammad’s wives,” the U.S. government said.

— A British teacher was sentenced to 15 days in jail in Sudan for offending Islam by allowing students to name the class teddy bear Muhammad in November 2007.

— In February 2007 in Egypt an Internet blogger was sentenced to four years in prison for writing a post that critiqued Islam.

— In 2004, Dutch filmmaker Theo Van Gogh was murdered after the release of his documentary highlighting the abuse of Muslim women.

“It’s obviously intended to have an intimidating effect on people expressing criticism of radical Islam, and the idea that you can have a defamation of a religion like this, I think, is a concept fundamentally foreign to our system of free expression in the United States,” said former U.N. Ambassador John Bolton…

Ä°hsanoÄŸlu: Islam “not just a guest in Europe”

* Â Europe owes its civilization to the Muzz:

Organization of the Islamic Conference (OIC) Secretary-General Ekmeleddin Ä°hsanoÄŸlu has said Islam is not an extrinsic addition to, but a fundamental element of European culture.Â

On a recent visit to Helsinki at the invitation of Finnish President Tarja Halonen, Ä°hsanoÄŸlu gave a lecture titled “Islam in Europe.” Stressing that his aim in giving this lecture was to stop Islamophobia from becoming widespread in Europe, Ä°hsanoÄŸlu told the Cihan news agency: “We argue that Islam is among the founding elements of Europe. The Ottomans ruled for five centuries in the Balkans, and Muslim rule in Andalusia lasted eight centuries. Above all, 41 million Muslims live in Europe right now. So Islam cannot be regarded as an extrinsic element in Europe. It is one of the founding elements of the European civilization.”Stressing that European civilization was built with many contributions from Muslim culture in terms of science, philosophy and humanistic values, Ä°hasanoÄŸlu said, “If we can share the idea that Islam is an essential element of Europe, Europe’s perception of Turkey’s EU membership would change.” Ä°hsanoÄŸlu said there is confusion about the place of Islam in Europe. “Islam has been in Europe for 14 centuries; it is not a foreigner in Europe,” he added.

Ä°hsanoÄŸlu also said it was not acceptable to equate those who engage in terrorism on behalf of Islam with Islam itself, adding: “Where do they get the authorization to commit terrorist acts under the name of Islam? Nobody has such a right, either in religion or in politics.” Ramazan Kerpeten/

One thought on “Ekmeleddin Ihsanoglu Watch:”