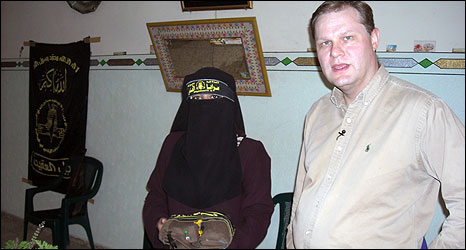 Â Â
Umm Anas was at the centre of a highly-staged event, but she was far from a cipher

There is a ceasefire hudna in Gaza, but the BBC has found evidence of militant groups preparing for a return to violence. One group, Islamic Jihad, is training female suicide bombers.

The young, veiled woman was sitting quiet and still as the room bustled around her.

The black flag of Islamic Jihad was pinned on the wall behind her and two Kalashnikovs were carefully placed in camera shot. Her husband, an Islamic Jihad fighter himself, tied on her “martyr’s” headband.

Umm Anas – not her real name – had just graduated from a programme to train female suicide bombers in Gaza.

Our meeting was a highly-orchestrated propaganda event laid on by Islamic Jihad. It was almost theatre – and certainly Israel accuses the Palestinian leadership of manipulating young women like 18-year-old Umm Anas.

Yet, although she nervously twisted her wedding ring, Umm Anas did not appear to be a cipher.

She was articulate – more so than the men staging the event – and she knew her own mind.

When she spoke of becoming a suicide bomber, Umm Anas’s voice was strong and steady: “This is a gift from God.

“We were created to become martyrs for God,” she continued, her eyes burning behind the full face veil.

“All the Palestinian people were created to fight in God’s name. If we just throw stones at the Jews they get scared. Imagine what happens when body parts fly at them.”

The bomb belt which she hopes will end her life – and kill many Israelis – rested on the table next to us.

Her main motivation in becoming a suicide bomber appears to be religious rather than nationalistic – the fulfilment of a long-held ambition. Even getting married recently hadn’t changed her mind.

“When my husband married me, he knew my way of thinking. He knew exactly who I am and based on this he decided to marry me. Marriage doesn’t give me a second’s doubt.”

I asked if that would alter if she became pregnant.

“I would wait until I delivered the baby,” she said. “I would give him to my parents and ask them to look after him… Then I would leave them and the baby would remain behind as a piece of me.”

Her parents, brothers and sisters did not know.

“Martyrs – male or female – have to work in secret. No one can know about it. We have to be careful not to give our parents any sign of what we are about to do.

“Sometimes, maybe, they can tell and see on your face the signs of martyrdom. They are suspicious but they don’t know for certain.”

Umm Anas thinks she knows the manner of her death, but she doesn’t know the timing.

She is waiting for the collapse of the Egyptian-brokered ceasefire between Israel and Hamas, the Islamic movement which rules Gaza.

Islamic Jihad accepted the ceasefire, but accuses Israel of readying for another large incursion into Gaza.

Israel meanwhile accuses militant groups of using the pause to refit and rearm.

“There is a clear Zionist decision and trend to end and break the lull,” said an Islamic Jihad spokesman last month.

This, says the organisation, is why it has been running its secret training programme for female suicide bombers. They want to be ready.

Trainees are being prepared to attack invading Israeli soldiers. But would Umm Anas be ready to walk into a restaurant full of civilians, too, and blow herself up?

“Israeli soldiers, of course… are the easier target when they come here, but [I would kill] civilians too because both civilians and soldiers took our land.”

But wouldn’t she have any difficulty killing people not holding a gun? Wouldn’t she feel pity for women and children?

“It is not important because all of them have violated our land. Children are civilians, but they grow up to become soldiers… They are all brought up to hate us. Palestine is only for Palestinians. We must kick them all out in any way we can.”

The use of Palestinian women as suicide bombers was once thought of as immodest – and therefore un-Islamic – but that changed, the militant groups say, because of shortage of male candidates and because women were better able to get close to their targets.

That’s the official explanation, but female bombers also have much greater propaganda impact.

Their participation in suicide attacks was made possible by religious rulings in Gaza.

Chairman of the Muslim Scholars Association Marwan Abu Ras told the BBC there were many precedents in Islamic history for women joining military operations.

“We do not encourage death,” he said. “Islam prohibits you from harming yourself, even to cause a small cut in your finger, but now we are fighting a war of resistance.

“If one nation violates another nation’s land, it is the obligation of everyone – men, women, and children – to fight back.”

Finally, I asked Umm Anas if she was ever able to put out of her mind what she was about to do.

“I never stop thinking of this,” she said.

“I take each step carefully because I know I am going to sacrifice myself. Martyrs must pray all the time. They must fast.

“There are many duties to perform before we are ready to face God. I am trying not to make any mistakes so that I do not miss this opportunity.”

6 thoughts on “Jihad for yo' Mama: Women to the Front:”