Â Â * Â It seemed a good idea at the time, but for Australia’s jet-setting PM Kevin Rudd it was just another act of grandstandingÂ and platitudes. Adding insult to injury is the idiotic report Â from al bebeeceera below.

*Â The head of the BBC has stated the media should treat Islam more sensitively than Christianity.

(and the bbc should be treated with the contempt it deserves – everyone, withhold the TV TAX) 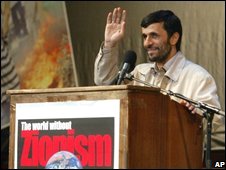 Mr Ahmadinejad has made several anti-Israel remarks in past speeches.

Australian foreign minister, Stephen Smith, told parliament he did not wish to “give further profile to these obscene remarks”. Â He also cited the complexity of the issues and the high legal threshold required to bring forward a case. “Complexity” translated means “lets put it in the too-hard basket”/ed

Australian Prime Minister Kevin Rudd threatened in May to take Mr Ahmadinejad to the International Court of Justice for inciting genocide against Israel.

The Islamic Republic does not officially recognise the Jewish state.

Since becoming president in 2005, Mr Ahmadinejad has provoked outraged reactions by predicting that Israel is doomed to disappear.

In October 2005, the Iranian president made a statement in which he envisaged the replacement of Israel with a Palestinian state.

This was widely translated as a call for Israel to be “wiped off the map,” although the precise translation of the remarks is disputed, and some suggest a more accurate rendering would be “the regime occupying Jerusalem should vanish from the page of time”.

* typical beep BS-reporting: the poison dwarf said the same thing over and over again, but Islamic apologists and the wankers from the BBC pretend he didn’t say it. Pathetic fools! /ed)

Mr Smith said the Australian government also dropped the case as it “would not want such legal action to complicate or distract from the international community’s efforts to address the serious concerns about Iran’s nuclear program and its failure to abide by binding United Nations Security Council resolutions”.

He said Australia would impose new financial and travel sanctions on 20 Iranian individuals and 18 organisations – including banks Melli and Saderat – which contribute to Iran’s nuclear and missile programs.

Iran’s refusal to halt sensitive nuclear activities has sparked three sets of UN Security Council sanctions as well as US and European sanctions. Iran maintains that its uranium enrichment programme is strictly for civilian purposes.

The return of the effeminate wankers:

The BBC will tackle Islam differently to Christianity… and we won’t make jokes about it, admits its Director General

BBC director general Mark Thompson has admitted that the broadcaster has to tackle Islam differently to Christianity and is reluctant to broadcast jokes about it.

He suggested that coverage needed to consider the feelings of Muslims because they are a religious minority, and had not fully integrated in to British society.

Mr Thompson was responding to comments made by comedian Ben Elton earlier this year who accused the BBC of being too scared to joke about Islam.

He said the corporation was too concerned with political correctness to poke fun at imams but were happy to satirise vicars. Speaking at an annual theology lecture for religious think tank Theos, Mr Thompson said: ‘My view is that there is a difference between the position of Christianity, which I believe should be central to the BBC’s religion coverage and widely respected and followed.

‘What Christian identity feels like to the broad population is a little bit different to people for whom their religion is also associated with an ethnic identity which has not been fully integrated.

‘There’s no reason why any religion should be immune from discussion, but I don’t want to say that all religions are the same. To be a minority I think puts a slightly different outlook on it.’

Elton made his comments earlier this year in an interview with Christian magazine Third Way when he was asked if too much deference was shown to religious people.

‘I think it all starts with people nodding whenever anybody says, ‘As a person of faith …’,’ he said.

‘And I believe that part of it is due to the genuine fear that the authorities and the community have about provoking the radical elements of Islam,” he said.

‘There’s no doubt about it, the BBC will let vicar gags pass but they would not let imam gags pass.Â  They might pretend that it’s, you know, something to do with their moral sensibilities, but it isn’t. It’s because they’re scared. I know these people.’

However Thompson’s admission was met with derision by Christian and media groups.

Stephen Green, director of Christian Voice, said: ‘Mr Thompson seems to be saying that because Islam is a minority religion it should be treated with kid gloves.

‘This is ridiculous. All religions should be treated with equally and with the same approach. I think the reality is that the BBC treats coverage of Islam and Muslims differently because it is terrified of offending them. It is political correctness. The BBC is simply not bothered about offending Christians despite the majority of this country being of that faith.’

John Beyer, director of Mediawatch, said: ‘All religions need to be treated in the same way, otherwise how can the BBC claim to be impartial?

‘I think that any approach to religious debate and discussion that is not impartial is not what the BBC should be doing.’

The corporation faced accusations of blasphemy from Christians after it broadcast controversial stage show Jerry Springer â€“ The Opera live on BBC2.

A record more than 47,000 complaints were made against the show which was strewn with expletives and featured Jesus, Mary and God as deviant guests on Jerry Springer’s TV show and up to 300 swear words.

However Mr Thompson, a practising Catholic, did insist that programmes that criticised Islam would be broadcast if they were of sufficient quality.

He revealed that his religious beliefs did play a part in the editorial decisions he made.

In his speech last night, the executive claimed there are now more programmes about religion on BBC television and radio than there have been in recent decades, whereas coverage has declined on ITV.

A BBC spokesman said: ‘People should look at his actual comments rather than trying to infer additional meaning that isn’t there.Â Â

‘What Mark Thompson said is that all religions are not the same – he did not say Islam, or indeed any faith, should be treated more sensitively than Christianity.Â  In fact he made it crystal clear that no religion should be regarded as off limits for the BBC.’