A council has sacked three officers after it was revealed an Afghan family was living in a Â£1.2million home paid for by the taxpayer.Â

Mother-of-seven Toorpakai Saiedi, 35, receives Â£170,000 a year in benefits, a staggering Â£150,000 of that is paid to a private landlord for the rent of a seven-bedroom house in West London.

The detached property in Acton has two large reception rooms, two kitchens, a dining room and a 100ft garden.Â

Ealing Council is picking up the Â£12,458 a month bill – which is nearly five times the rent for a similar property in the same road. Outside the house yesterday, Mrs Saiedi’s son Jawad said: ‘When the council chose to put us here we did not say no. If someone gave you a lottery jackpot would you leave it?

‘When I heard how much the council was paying I thought they were mad.’

*Â U.K.: Muslim prisoners get new clothes if cells are searched with dogs

* Â A Â “toolkit” being made available to schools in England to prevent pupils becoming drawn to extremist ideals amounts to a set of practical guidelines and ideas. 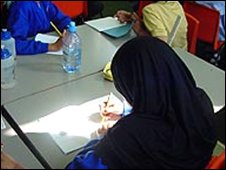 Neither the landlord nor the family, who have lived in Britain for seven years after applying for political asylum, have done anything illegal but have benefited from an extraordinary series of loopholes in Whitehall guidelines introduced in April for housing allowances.

Incredibly, under the Local Housing Allowance Scheme areas such as Acton are in the same rent band as wealthy Westminster. It also means landlords know the maximum they can charge.

Last night, as the Saiedi family joked about their good fortune, the Government was urgently reassessing the scheme amid calls for an overall of the system.

Ealing Council has sacked three officers involved in the case.

Will Brooks, the council’s cabinet member for housing, said: ‘The sums of money involved will offend people’s feelings of fair play, especially as so many are having difficulties paying bills at the moment.

‘The story highlights some of the absurdities of the housing and benefit system. What will surprise and anger people is that these rent levels are published so landlords are fully aware of the maximum levels that can be paid. Comfort: The spacious West London home which Mrs Saindi occupies with her seven children at the taxpayer’s expense

‘In cases such as this, where there are very few seven-bedroom properties, landlords will obviously seek the absolute maximum as set down by the Government.’

Mrs Saiedi, who had her first child aged 13, came to Britain with her seven children in 2001, a year after her husband Haji Rahmat Shah Saiedi, 45, had arrived in London and claimed asylum.

The family, who were granted leave to remain, say they were wealthy farmers near Bagram airbase, 20 miles from the Afghan capital Kabul, and were forced to leave because of Taliban threats.

Since arriving in Britain, they have lived in property paid for by local authorities – first in a three-bedroom terrace house in Enfield, North London, and then in a five-bedroom semi in Ealing.

They were there for nearly three years until the landlord of the property told the council the family would have to move out because he wanted to live in the house.

Mr Saiedi, a taxi driver, and his wife live separately but the size of the family – Nasir, 22, Jawad, 20, Fawad, 18, three girls aged 15, 13 and eight and another boy aged ten – meant they were entitled to a seven-bedroom home.

An Ealing spokesman said: ‘As the Department for Work and Pensions told us, it was appropriate to put them in a seven-bedroom property because of the ages of the children. So we went to the private sector. The rents in the private sector were set in the new system in April.’

The property was bought in March for Â£1.2million by Ajit Panesar. He insisted: ‘I have done nothing wrong. I can’t help it if the law says I should get paid the amount of money.’

If Ealing had got a mortgage for Â£1.2million to buy the house itself it would be paying Â£8,102 a month in repayments – a third less than it is paying Mr Panesar.

Jawad, a student who admits he spends most of his time driving around in cars and playing snooker, said: ‘We are very lucky to live here, maybe the council made a mistake. It is a lot of money to pay and the landlord is the one who is really lucky. He must be getting rich.’

He added: ‘The property had been refurbished before we arrived, but there were certain aspects that I was not happy with so I phone up the council and it sent people to fix the drive and clean up the garden.’

He added: ‘We do like living here. But my mum has said she is not happy because the house is so big and she doesn’t like cleaning. It is much smaller than our house in Afghanistan.

‘Some of the rooms in England we would not even put our chickens in because they are so small.’

Mrs Saiedi said: ‘I always thought the housing benefit was a lot, but I am told it is what it is for homes like this here.’ She added: ‘I’m happy in England. The education is better and I like Ealing.’

Details of the case have caused anger in the road where the family live, not least in the house opposite where 94-year-old Jozeph Pawlica, a former prisoner of war, has to pay for his own care despite living in Britain since 1948. His daughter Elizabeth de Rozarieux, 51, said: ‘I think it is diabolical.’

There was anger too from the sacked housing officers, David Lewis, Gemma Calliste and Salma Khan, who accuse Ealing of making them scapegoats. Mr Lewis, 37, said: ‘We are shocked and stunned that we’ve lost our jobs as we were just doing what we were told.

‘We were told to find this family a seven-bedroom house and that’s what we did. People raised their eyebrows at the figure of Â£12,000, but it is set by the Government. If there was a problem with it, the Government shouldn’t have set it so high.’

Cashing in on the loopholes The extraordinary scheme under which Toorpakai Saiedi can make her massive claim for housing benefit was introduced in April and has been described as a licence for landlords to cash in.Â

The Local Housing Allowance allows landlords, such as Ajit Panesar, to know the maximum a council can pay for any property even before opening negotiations.Â

It also allows tenants to receive a weekly cash bonus to their benefits if they can broker a rental below the area’s average rate.Â

LHA rates are calculated for individual areas, known as Broad Market Rental Areas, and are based on where the claimant will live, the household size and the number living there.Â

One of the major problems is that the bands cover several council areas – in the Saiedi case most of West London. This means that Acton where she lives is placed in the same bracket as Westminster – and Acton prices are inflated by those in Westminster.Â

A landlord or tenant merely has to visit the LHA’s website to see what the potential for a property is and calculate the possible amount of housing benefit available.Â

Landlord and tenant can agree the rent between one another and then refer it to the council for approval.Â

In the Saiedi case, Ealing was obliged by law to provide her family with accommodation. No council home was available so it had to turn to the private sector.Â

Seven bedrooms were needed because under guidelines boys and girls cannot share the same room after the age of ten.Â

A spokesman for the Department of Work and Pensions said: ‘The new LHA is a system of allocating housing benefit which is fairer and more transparent than before. It works to localise boundaries, to give people on low incomes rental choices where they live and set a fair level of rent for each area.Â

‘At the root of this case is something particular to inner London. We have already identified a handful of cases of this kind and we are urgently looking at ways to tackle it.’Â

Definition of Chutzpah: Guy Who Defrauded Medicaid/Mich. Taxpayers for Muslim Aliens, Asks us to Help Him “Battle Mich. Poverty”

I’m often asked by non-Jews for the definition of the Yiddish (and Hebrew) word, “chutzpah.” Essentially, as it is used, it means nerve or gall.

But I’ll give you a better definition. His name isÂ Ismael Ahmed. As I’ve repeatedly detailed on this site, Ismael Ahmed founded and headedÂ ACCESS, the Arab Community Center for Economic and Social Services.

As head of this organization, he spent thousands your federal job training dollars to train Al-Qaeda terrorists in how to drive trucks and helped them try to get commercial driver’s licenses (CDLs). 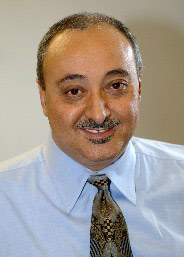 Ismael Ahmed: Walking, Breathing Definition of ChutzpahAnd he spent hundreds of thousands of dollars helping Muslim illegal aliens get into America, stay here, and avoid Immigration and Customs Enforcement (ICE) agents (not a tough feat, given that he had a willing ally in ICE Special Agent in ChargeBrian Moskowitz, a married man who was always trying to “date”–euphemism–female ACCESS employees and may have succeeded).

That’s not to mention theÂ tax money he wasted funding the 2002 Palestinian Divestment (from Israel) ConferenceÂ at the University of Michigan.

And Ismael Ahmed spent hundreds of thousands of dollars helping bring to America pregnant Muslim aliens, giving them phony social security numbers, and coaching them on how to defraud Medicaid, so that Americans would not only host the birth of tens of thousands of Muslim anchor babies, but pay for the privilege.

Now, Ahmed heads the Michigan Department of Human Services, where he is the fox over the henhouse of Medicaid in Michigan. He was appointed by Michigan Democratic Governor Jennifer Granholm, who as Attorney General investigating the matter knew he was ripping off Michiganians. But she had elections to win.

But that’s not the biggest example of “chutzpah” in this story.

This is: Today, this man–who has spent decades ripping off Americans, many from Michigan, to fund their country’s future destruction–has a guest column in the Detroit Free Press asking Michigan residents to “Join [the]Battle Against Poverty in Michigan.”

Yup, the man who spent decades ripping off the Michigan working poor, having them pay taxes to fund Islamic illegal aliens, terrorist-trainees, anti-Semitic hate confabs, and Muslim anchor babies, is now asking them to help him help them get out of poverty.

Hmmmm . . . maybe if the multi-millions federal and Michigan taxpayers and United Way donors gave to Ahmed and ACCESS over the years were actually spent on poor Michigan citizens, they wouldn’t be in poverty.

How do you define “chutzpah”? Ismael Ahmed.

Since Ahmed’s first wife (who was rumored to be preparing to divorce him) died when she “mysteriously” “fell” down an elevator shaft while with him on a visit to New York City, maybe Ismael Ahmed will also ask us to also help him in the war against unnecessary coincidentally-timed deaths of first wives you didn’t get along with.

I can help by sending this tip to his current wife, Margaret Ahmed:

When your hubby is around, don’t stand near elevators.

2 thoughts on “Life is good in Londonistan!”