Obama, the videotape and informing the public

“you are selfish if you hold on to your money…”

As the media and the Obama campaign continue to cover for Rashid Khalidi, repeating his denials that he was a spokesman for Yasser Arafat’s Palestine Liberation Organization at a time when they were murdering Americans and were listed as a terrorist group by the US, Martin Kramer has exhaustively documented the falsehood of these excuses. His post on the subject has been updated with more proof that Khalidi was indeedÂ a shill for terrorists.

Ironically, the latest proof comes from … the Los Angeles Times.

OBAMA, KHALIDI AND THE ART OF BEHEADING DANCE

As you all know, the Los Angeles Times is holding hostage a tape of Barack Obama at a 2003 Arab American Action Network (AAAN) dinner at which his friends, Rashid Khalidi, William Ayers, and Bernadine Dohrn were in attendance. It’s the story I startedÂ when Los Angeles Times plagiarist/”reporter” Peter Wallsten ripped offmy January column onÂ Barack Obama’s Nation of Islam staffers and friendship with AAAN founder Ali Abunimah.

But here’s what you haven’t yet heard: that a kids’ dance troupe that appeared at the event has a history of simulating beheadings and stomping on American, Israeli, and British flags. 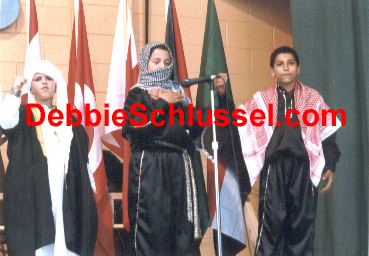 Sanabel AlQuds Dance Troupe with Sword Beheading AccessoriesReports ofÂ the partial guest listÂ at the 2003 dinner include “the Sanabel Debka troupe”, but the group’s name is really “Sanabel AlQuds Dabka troupe.”Â Sanabelmeans “grains” or “kernels” (of wheat or barley) in Arabic.Â AlQuds, or “The Holy”, is the Muslim name for Jerusalem, which isÂ ripped-off from the eternal Hebrew name for Jerusalem, “Ir Kadosh“, or Holy City.

The Milwaukee-based Muslim kids dancing troupe purports to perform the debka, a Middle-Eastern step-dance. But this group, made up of mostly Palestinian Muslims and under the auspices of the Milwaukee Muslim American Society does far more in its “performance.” And it’s frightening.

In June 2004, I went undercover and attended a Dearborn fundraising dinner for Islamic Relief, the Muslim Brotherhood charity that is a front for HAMAS and Al-Qaeda. The event was MC’ed by Rayed Tayeh, who orchestrated the Starbucks Coffee boycott and who is believed to be a HAMAS operative.

Sanabel AlQuds performed to songs calling for martyrdom to “get back Palestine.” The kids were young boys, some of them appearing to be no older than seven years old.

But they didn’t just dance the debkah.

Suddenly the Sanabel AlQuds dancers pulled out fake swords and rifles and adorned three of their troupe respectively with an American, Isreaeli, and British flag. The others pretended to behead and/or shoot the boys wearing the flags. Then they put red scarves over the three boys heads, signifying blood and no head. Then, the flags were taken off, thrown to the ground, and trampled on by this young group of Milwaukee dancers.

Once I saw this “performance” I realized why there were signs all over saying, “No video equipment or cameras allowed.”

I wrote about this in 2004 inÂ my review of “Fahrenheit 9/11”, because it featured Obama surrogate John Conyers who was at the Sanabel AlQuds performance and just loved it:

Take the June 13 Muslim American Society fundraising dinner for Islamic Relief, a charity with links to the Muslim Brotherhood. Conyers and his wife were the guests of honor. They watched and clapped as the Sanabel AlQuds “dancing” troop from Milwaukee–featuring boys as young as seven–sang in Arabic of martyrdom and jihad for Allah and Palestine. They didn’t need to understand Arabic, as the young boys used a rifle to simulate killing and pistol-whipping, simulated throat-slittings and beheadings, and dishonored the American flag.

Some pictures of Sanabel AlQuds Dabka troupe hint at some of this and show the kids dancing with swords (see above).

I also wrote about it in August 2006, because I’m sick and tired of theÂ tens of millions the Mormon Church, the Church of Jesus Christ Latter Day Saints, has been giving this group, Islamic Relief:

The evening’s “entertainment” consisted of young boys–some apparently as young as seven–simulating beheadings and shootings of other young boys who donned the American, Israeli, and British flags. Then they put red scarves over their heads to symbolize blood . . . and no head.

While I do not know if Sanabel AlQuds performed this particular “dance” for Barack and Michelle Obama and other guests at this dinner, I know that this was their performance in the summer of 2004, just a year after the dinner that is the subject of the videotape the Los Angeles Times will not release. It may be that this same “act” was performed for the Obamas, but that it was not part of the tape, which would be why L.A. Times plagiarist/”reporter” Peter Wallsten did not write about it.

Still, why is Barack Obama hanging out with young kids who simulate beheadings of Americans and Jews on a regular basis?

Maybe they can perform their unique, halal version of the debka at an Inaugural Ball. I’m sure the Secret Service would make an allowance for the swords . . . for the sake of political correctness. 2 thoughts on “WaPo, release the tapes!”