He only wanted to “strike terror into the hearts of the enemies of Allah” (Qur’an 8:60).

This would-be train bomber in Germany was described by friends
as being a normal person “until heÂ became more religious.”Â Â
Can you guess his religion?

A Lebanese man has been sentenced to life in jail over a failed plot to bomb passenger trains in Germany in 2006.

Yusef Mohammed al-Hajj Dib, 24, was convicted of attempted murder by the court in Dusseldorf, western Germany.

In July 2006, two bombs were found on trains in Dortmund and Koblenz, but the devices failed to go off.

Hajj Dib had argued he only wanted to scare the public after being angered by a row over the the publication of cartoons of the Prophet Muhammad.

The cartoons – that were first printed in a Danish newspaper – triggered violent protests across the Muslim world. 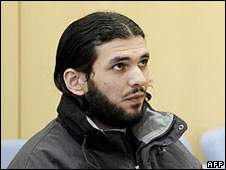 Hajj Dib was captured on CCTV cameras placing the bombs

Hajj Dib is one of two main suspects accused of planting the bombs.

Jihad Hamad, aged 22, was arrested in his native Lebanon in August 2006 after fleeing Germany.

“This was a crime for which only the highest penalty under the law can apply,” presiding Judge Ottmar Breidling said on Tuesday.

The judge dismissed Hajj Dib’s claim that he had only placed a mock-up of a bomb.

The two men were captured on CCTV cameras placing suitcases packed with explosives on the two trains at Cologne station, western Germany.

The devices were fitted with timers set to go off 10 minutes before the trains arrived in Dortmund and Koblenz.

Police said the bombs had failed to detonate because of a construction flaw.

During the trial, the prosecution had argued that the planned attacks could have killed up to 72 people.Â

One thought on “Germany: would-be train bomber gets 15 years in jail”