* The cleanup is not even over, the bodies not even cremated or buried, Â and the conspiracy kooks, the Islamo-apologists, the Muhammedan agit-props along with their Western useful idiots are spinning like Iranian centrifuges to whitewash Islam and blame the U.S., Â the Ninja Turtles and little green men from Mars. It is up to us, dear readers, to pull their soapbox out from underneath them:

Some of the worst are listed here:

*Â CNN aids Mumbai jihad: ‘We thought we were safe… then CNN stepped in!’

*Â The NY Times refuses to report role of Islam in Mumbai Massacre / No surprises here: the whores from the NYT are always in bed with the enemy..

The Wall Street Journal does the right thing:

Last week in Mumbai we witnessed as clear a case of carefully planned mass terrorism as we are ever likely to see.

The seven-venue atrocity was coordinated in a highly sophisticated way. The terrorists used BlackBerrys to stay in touch with each other during their three-and-half-day rampage, outwitting the authorities by monitoring international reaction to the attacks on British, Urdu and Arabic Web sites. It was a meticulously organized operation aimed exclusively at civilian targets: two hospitals, a train station, two hotels, a leading tourist restaurant and a Jewish center. 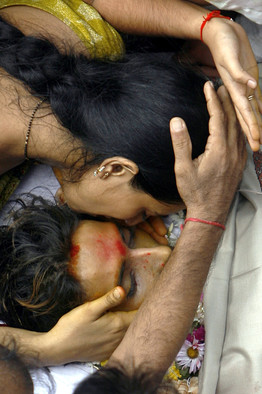 Murder in Mumbai: The work of ‘practitioners.’

There was nothing remotely random about it. This was no hostage standoff. The terrorists didn’t want to negotiate. They wanted to murder as many Hindus, Christians, Jews, atheists and other “infidels” as they could, and in as spectacular a manner as possible. In the Jewish center, some of the female victims even appear to have been tortured before being killed.

So why are so many prominent Western media reluctant to call the perpetrators terrorists? Why did Jon Snow, one of Britain’s most respected TV journalists, use the word “practitioners” when referring to the Mumbai terrorists? Was he perhaps confusing them with doctors?

Why did Britain’s highly regarded Channel 4 News state that the “militants” showed a “wanton disregard for race or creed” when exactly the opposite was true: Targets and victims were very carefully selected. Why did the “experts” invited to discuss the Mumbai attacks in one show on the state-funded Radio France Internationale, the voice of France around the world, harp on about Baruch Goldstein (who carried out the Hebron shootings in 1994), virtually the sole case of a Jewish terrorist in living memory?

Unfortunately in recent years we have become used to leftist media burying their heads in the sand about the threat that Islamic fundamentalism poses, in much the same way as they once refused to report accurately on communist atrocities. But now even conservative media may be doing it too.

What is the motivation of journalists in trying to mangle language — such as going out of their way to refer to terrorists as “militants,” as one Mumbai story on yesterday’s Times of London Web site seemed to do? Do they somehow wish to express sympathy for these murderers, or perhaps make their crimes seem almost acceptable? How are we going to effectively confront terrorists when we can’t even identify them as such?

But then the terrorists in Mumbai didn’t need to make any public announcements. They knew that many deluded Western journalists and academics will do that job for them, explaining that the West is to blame, especially the Zionists.

We have started seeing this already on the BBC — the world’s largest TV and radio network, which broadcasts in dozens of different languages around the world and is lavishly funded by the British taxpayer.

You would be hard pressed to find any talk of radical Islam on the BBC in recent days, or mention of the fact that Islamists think India should be a Muslim country. Instead the BBC continues to try to persuade its massive global audience that “it is a local Indian problem,” that “the subcontinent has a history of unrest,” and so on.

Even the Pakistani angle has been presented as some kind of local Pakistan-India dispute rather than as a problem with radical Islam — this despite the fact that according to numerous reports the Mumbai terrorists themselves were screaming “Allah Akbar” (Allah is the Greatest) as they murdered “the Jews and the infidels” in line with bin Ladenist ideology.

For some time, many have argued that an element of anti-Semitism has distorted the way the BBC covers the Israeli-Palestinian conflict. But now, following the Mumbai events, we can perhaps see that anti-Semitism may even be at work in the way the BBC covers foreign news in general. For much of the Mumbai siege, the BBC went out of its way to avoid reporting that the Jewish community center was one of the seven targets. At one point viewers were told that “an office building” had been targeted (referring to the Jewish center as such).

Then on Friday morning, TV pictures of Indian commandos storming the besieged Jewish center were broadcast by networks around the world. Heavily armed commandos, their faces covered by balaclavas, rappelled from helicopters onto the roof while Indian sharpshooters in buildings opposite opened fire and a helicopter circled overhead. Huge crowds of onlookers could be seen looking aghast as they watched from nearby streets. While Sky News and other channels were gripped by these dramatic pictures, BBC World was not, almost pretending there was no siege at the Jewish center — even though by then it was one of only two sites that remained under attack in Mumbai. Had the terrorists chosen to besiege a church or mosque instead, can you imagine the BBC ignoring it this way?

Meanwhile — perhaps even more disgracefully — a New York Times report on the last day of the siege stated: “It is not known if the Jewish center was strategically chosen, or if it was an accidental hostage scene.”

Has the New York Times learned anything since the Holocaust, when, even after the war ended in the spring of 1945, the paper infamously refused to report that the Hungarians, Czechs, Slovaks, Germans and so on killed in the camps had been Jews, and killed as Jews?

Dozens of eyewitness accounts by local Indians said the gunmen shouted “Allah Akbar” from the Jewish center. It is housed in a nondescript block and is not obviously marked from the outside as a Jewish center. It is the one Jewish building in a densely crowded city of millions. And the Times, the self-proclaimed paper of record, wants to let readers think it might have been an accidental target?

Even the Times’s British equivalent, the Guardian, began its news story: “The inclusion of the headquarters of an ultra-orthodox Jewish group was obviously intended to send its own message.” Does the New York Times think that the seeking out and murder by Muslim terrorists of the only New York rabbi in Mumbai and his wife was “an accidental target”?

There was nothing accidental about any of the seven sites that the terrorists attacked. And it was no accident that Mumbai was hit. It is the most multireligious city in India — with Hindus, Muslims, Christians, Parsees and Jews living in relative harmony.

Mr. Gross is a former Middle East correspondent for the Sunday Telegraph.

2 thoughts on “If this Isn't Terrorism, What Is?”