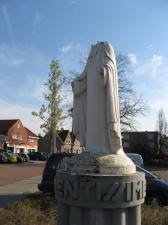 To the police he had admitted to all the charges and said that he had ‘acted by orders of God in order to warn people.” He had already been sentenced in the past for similar crimes.

Besides the community service the judge also imposed on him two weeks conditional jail sentence. He’ll be under surveillance by the rehabilitation service for two years of probation. He is also to pay compensation for the claimed damage: 2,700 euro to the Lambertus parish and 1,780 Euro to the Deurne municipality.