* by “Israeli brinkmanship” theyÂ explicitlyÂ meanÂ “Israel’s refusal to give Hamas everything they want”:

It’s the deadliest job in showbiz.Â Pioneers of TomorrowÂ churns through shrieking, one-note hosts (four since 2007) even faster thanÂ Media WatchÂ (five since 2000). The Hamas TV children’s show is reducing the biodiversity of giant anthropomorphic Gaza-area hate-muppets so quickly that an environmentalist intervention might be needed:

Status: perished due to injuries received in Israeli bombing. 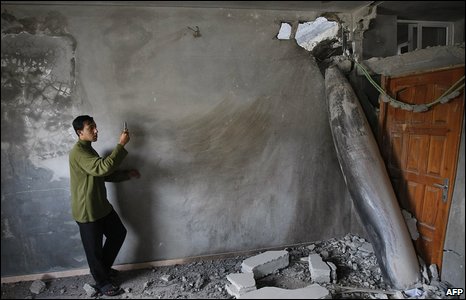 Â Â Â Â Â
Israeli aircraft dropped hundreds of tons of explosives on Gaza, not all of which exploded

A large stockpile of unexploded weapons has disappeared in Gaza, before United Nations experts were able to dispose of it safely, the BBC has learned.

The explosives, including aircraft bombs and white phosphorus shells, were fired by the Israeli military during its recent offensive in the Gaza Strip.

UN officials said they were urgently trying to establish where the arms had gone and have called for their return.

Israel has accused Hamas of taking the stockpile, which was under Hamas guard.

Richard Miron, the senior UN spokesman in Jerusalem, said: “We are anxious to get the return of this ordnance. It’s clearly extremely dangerous and needs to be disposed of in a safe manner.

“This is our primary concern.”

A UN Mines Action Team has been in Gaza since the end of the war, last month, its job to locate unexploded Israeli ordnance and to organise its safe disposal.

Two weeks ago, on 2 February, the UN team was given access to a storage site in Gaza City where more than 7,000kg of explosives was being housed.

It included three 2,000-pound bombs and eight 500-pound bombs, which had all been dropped from aircraft but failed to explode.

There was also a large number of 155mm shells for delivering the incendiary chemical white phosphorus.

Many of the explosives had been collected by the Hamas authorities in the Gaza Strip.

The UN staff had been waiting for the Israeli army to allow them to bring specialist equipment into Gaza so they would be able to destroy the explosives safely.

In particular, the team needed explosives or flares to set off a controlled explosion and they needed tools to allow them to extract fuses from some of the bombs.

The UN staff were also waiting for permission from the Israeli military to use two safe areas to dispose of the munitions.

At a meeting last Thursday with the Israeli army, two areas were identified: one in the north, in a no-go area close to the border with Israel and the other near Khan Younis in the south, in a former Hamas training area.

On Sunday, when UN officials returned to the warehouse, which was under a Hamas police guard, they say they found most of the explosives had gone missing.

Israeli military spokesman Peter Lerner said the stockpile had been “commandeered by Hamas”.