Its only just begun:

Former Senator, TV star and presidential candidate Fred Thompson tells Newsmax that President Barack Obama is revealing his “naivete, ineptitude and arrogance” as he deals with matters of national security.

The Tennessee Republican, who now hosts a radio show on Westwood One along with his wife Jeri, also said the “dogs of war have been loosed” over left-wing attempts to single out Bush-era officials for prosecution relating to the treatment of detainees.

Newsmax.TV’s Ashley Martella cited the announcement that the Defense Department is going to release many pictures showing alleged abuse by U.S. troops in Iraq and Afghanistan, and asked Thompson what purpose that might serve.

“None, other than to serve as propaganda tools for our worst enemies,” Thompson said. Â Click Here for more…

Move over Janet Napolitano. Your Department of Homeland Security is not the only public institution that claims military veterans pose a threat to public safety.

Obama’s Cabinet: a Motley Crue of Misfits, Incompetents, and Criminals

Obama wants to aid Palestinians even with Hamas in power

A roundup of just a few of the highlights since January 20:

â€¢ Obama’s DHS quietly dropped the term “war on terror.” Janet Napolitano even went so far as to say that she preferred to refer not to acts of “terrorism” but to “man-caused disasters.”Â
â€¢ Obama named Los Angeles Times columnist Rosa Brooks as an adviser to the undersecretary of Defense for policy; Brooks is venomously anti-Israel and once wrote that al-Qaeda was “little more than an obscure group of extremist thugs,” and that the Bush Administration had only imagined that it was a “vast global threat.”
â€¢ Obama has tabbed Harold Koh to become the legal adviser for the State Department. Koh has said that he had no objection to Sharia being applied to “an appropriate case” in the United States.
â€¢ Obama invited the head of the Organization of the Islamic Conference, a 56-nation body that has declared its intention to compel the United Nations to criminalize all criticism of Islam, to the White House.
â€¢ Obama has declared his determination to open negotiations with “moderate elements” of the Taliban, despite the fact that no such people have ever been found.
â€¢ Obama has declared his determination to close Guantanamo, despite the fact that over 60 former Gitmo detainees have returned to the jihad.

“Report: Obama wants aid to go to PA even if Hamas joins government,” fromÂ Haaretz, April 27 (thanks to JW):

The Obama administration has asked Congress to amend U.S. law to enable the Palestinians to receive federal aid even if it forms a unity coalition with Hamas, the L.A. Times reported on Monday.Hamas, which seized control of the Gaza Strip from Palestinian President Mahmoud Abbas’ forces in a bloody 2007 coup, has been deemed a terrorist organization by the U.S. and therefore cannot not legally receive U.S. government aid.

The U.S. has presented an $830.4-billion emergency spending bill, comprising funding for its wars in Iraq and Afghanistan. The bill would also allocate $840 million to the Palestinian Authority and for reconstruction in the Gaza Strip following Israel’s three-week offensive there earlier this year.

Because none of the Gaza aid can legally reach Hamas, it will be difficult to ensure its delivery to the coastal territory.

The U.S. has refused to grant aid to Hamas unless the group agrees to recognize Israel, renounce violence and agreeing to follow past accords secured between Israel and the Palestinian Authority.

The administration’s request for the minor changes to aid measures is unlikely to come into fruition, as no concrete plans are yet underway for a Palestinian unity government. Reconciliation talks between Hamas and Fatah have been ongoing, but have so far yielded no results.

Still, the move has stirred controversy among pro-Israel U.S. officials, according to the L.A. Times.

Republican Representative Mark Steven Kirk told Secretary of State Hillary Clinton at a House hearing last week that the proposal was tantamount to supporting a government with “only has a few Nazis in it,” the L.A. Times said….

The Political Hypocrisy of The Decade Award Goes to [drum roll]

U.S. Secretary of State Hillary Rodham Clinton assured Iraqis on Saturday that the Obama administration would not abandon their country even as it presses ahead with plans to withdraw American troops amid a recent surge in violence.

A commission investigating waste and fraud in wartime spending has found serious deficiencies in training and equipment for hundreds of Ugandan guards hired to protect U.S. military bases in Iraq, the Associated Press has learned.

The problems at Forward Operating Bases Delta and Hammer include a lack of vehicles used to properly protect the two posts, a shortage of weapons and night vision gear, and poorly trained guards. Both bases house several thousand U.S. military personnel.

Concerned the shortages leave the bases vulnerable, the Commission on Wartime Contracting alerted military officials in Iraq and at U.S. Central Command in Tampa, Fla.

Hillary Clinton the Tomboy and Her “Ah-Ha” Moment

PARTISAN turmoil that lingered after this month’s tea party protests reignited recently, when the Department of Homeland Security issued a report to federal and local law enforcement officials on right-wing extremism. The report detailed current economic and political factors that could enhance recruitment for extremist groups. Yet the report defined extremism in a way that implicates a huge portion of the political spectrum. Conservatives are right to be angry.

Of course, Homeland Security has a responsibility to keep law enforcement officials aware of potential threats. But it must not tie their hands by making them look like the arm of a political machine.

The report drew particular criticism over comments on “disgruntled military veterans,” who, it suggests, may be targeted by extremist groups looking to use their “skill and knowledge to carry out violence.” Missing was any empirical evidence for its claims beyond the examples of Timothy McVeigh and Richard A. Poplawski, the Pittsburgh man who recently shot three police officers and exhibited fears that the government would take his guns.

Worse, the report’s depiction of an extremist describes the political beliefs of many Americans, saying that “many right-wing extremists are antagonistic toward the new presidential administration . . . immigration . . . and restrictions on firearms.” But Americans have every right to oppose all three. Drawing a parallel, even implicitly, between specific political beliefs and criminal intent is something Americans must oppose, regardless of political affiliation.

Conservative leaders immediately joined veterans groups in complaining that the report was an act of political targeting by the Obama administration. Department of Homeland Security Secretary Janet Napolitano subsequently apologized to veterans who were offended, saying the report was not an accusation. But she still defended the report.

This is unfortunate, because the language of the report even faced objections from the department’s own Office for Civil Rights and Civil Liberties before its release. Napolitano must take these concerns more seriously. She should consider it one of her primary obligations to prevent the politicization of Homeland Security. 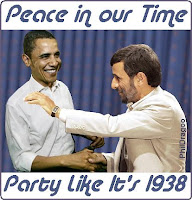 Politico reports that more and more Democrats in Congress are getting nervous about President Obama’s fawning attitude towards Iran – and they are trying to do something tolimit itÂ (Hat Tip:Â InstapunditÂ andMemeorandum).

Democrats in Congress are joining Republicans in calling for tough new sanctions on Iran and warning the Obama administration that its policy of engagement shouldn’t last too long before turning to harsher steps aimed at halting Tehran’s nuclear program. Â More>>