Obamessiah has no time for Nethanyahu, the Â Prime Minister of Israel 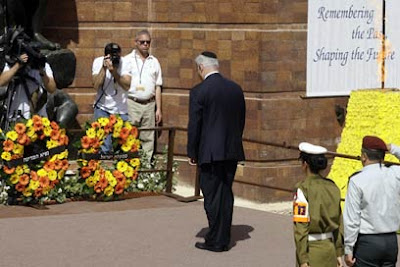 On the same day:

They threw out the clowns who protested, but not the swine who accompanied the ape…

U.N.: Ahmadinejad’s Durban II speech was an edited version of the original

Â A couple of kids in clown suits Â started demonstrating in the aisles in front of Ahmadinejad. Â It seemed surreal. Â (I later learned they were members of a European Jewish delegation.) Â Everyone in my room appeared amazed, even pleased, but the clowns were unceremoniously escorted from the hall and Ahmadinejad resumed his speech. Â I thought this was some minor interruption of the sort one frequently sees in the US, but in what seemed like seconds, a number of national delegates were standing up in their seats in front of Ahmadinejad and walking out in his face. These included France, Belgium, the Czech Republic, the UK, etc… all countries that, I knew, had made a big deal about attending the conference, not the US, Canada, New Zealand, Australia, Italy, Poland, Germany and the Netherlands – that honor roll of countries with the sense to realize what a fiasco this was in front and refused to participate (how good they look now!).

This walkout precipitated, if anything, a bigger response in the room I was in where almost everyone was on their feet now, shouting at Ahmadinejad and racing for the door.Â I found my cameraman and headed down stairs toward the main salon. Â It was almost like a stampede at that point – right in the United Nations – people were so appalled by Ahmadinejad. Â We took a lot of footage of this with commentary by Dershowitz, Shelby Steele and John Voigt, which you will be able to see on PJTV.

Still, by then, Â I had only heard snippets of what Ahmadinejad had said that had prompted this reaction. Soon, however, it was all too clear.Â Here is a translation of just one passage – reprinted verbatim in their own English – provided by the perpetrators themselves, the Permanent Mission of the Islamic Republic of Iran to the UN:

“Following the World War Two, they [the West? Security Council members?] resorted to military aggression to make an entire nation homeless, on the pretext of Jewish sufferings and the ambiguous and the dubious question of holocaust. [sic] Â They sent migrants from Europe, the United States and from other parts of the world to establish a totally racist government in the occupied Palestine…”

So there you have it – Holocaust denial in what was ostensibly the main speech of the Durban Review Conference. Â TheÂ VaticanÂ (among others) condemned this as “extremist and unacceptable.” I have heard too that UN Secretary General Ban Ki-Moon is quite concerned about the fallout this will have for the UN, particularly for it’s heavily US financed pocketbook, if the American people start to have enough of this reactionary nonsense masquerading as anti-racism.

But wait – there’s more from Simon>>