Mahmoud Abbas: “A Jewish state, what is that supposed to mean?”

*Â For those who cannot figure out Abu Mazen’s real intentions, please consider this picture from Tuesday’s ‘Palestinian’ papers: 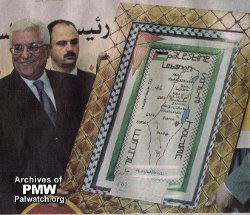 And here’s the story behind the picture fromÂ Palestinian Media Watch.

Recognizing Israel as a Jewish state poses temporal and religious problems for Abbas & Co.: Acknowledging and accepting Israel’s Jewish identity disqualifies Muslims’ future claims on the land for negotiation, armed conflict, the claim to a “right of return,” and so forth. Doing so would also acknowledge the historical identity of the region as a Jewish homeland (as opposed to the revisionist story of the allegedly “uncorrupted” followers of a proto-Muslim Abraham). Lastly, it accepts something other than Islamic law as legitimate, which is out of step with the fundamental reason for waging jihad: Imposing Islamic dominion and law.

A little more than ten days ago, when the controversy over ‘Palestinian’ recognition of Israel as a Jewish state first cropped up, IÂ produced a copyÂ of President Truman’s letter recognizing the State of Israel and suggested why the words ‘Jewish state’ might have been crossed out. 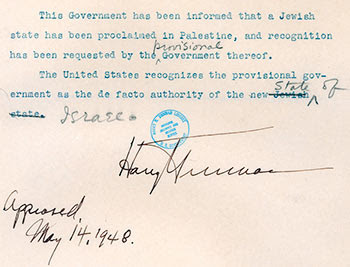 What Erekat is apparently arguing is that Truman’s having crossed out “new Jewish state” and having written in “State of Israel” means that Truman did not recognize that Israel is a Jewish state. That’s nonsense for third reasons. First, the most likely scenario is that Truman was told that the State had a name when he went to sign the letter, and therefore he decided to recognize the State by its name. Second, his first paragraph says that “a Jewish state has been proclaimed in Palestine.” Well, if he wasn’t recognizing that “Jewish state,” what is the meaning of the second paragraph? Third, the United States never threatened to flood Israel with ‘refugees,’ has no contiguous borders with Israel and has never threatened to ‘drive the Jews into the sea.’ So once again, Erekat’s comparison fails.

Continued: “A Jewish state, what is that supposed to mean?”

“A Jewish state, what is that supposed to mean?,” said Abbas, quoted by Israeli media. “You can call yourselves as you like, but I don’t accept it and I say so publicly.”

He also said it was not his job to define or name the Israeli state.

Many observers believe the so called ‘green line’ â€“ the pre-1967 Six-Day War ceasefire line between Israel and Jordan â€“ should be the basis for an international border between Israel and the West Bank in the creation of a future Palestinian state.

Israeli daily Haaretz said last week that Netanyahu wanted to impose the precondition of recognition of Israel as a Jewish state in order to resume peace negotiations.

However, it is believed such recognition would block the Palestinians demand for the “right of return” of millions of refugees who fled or were expelled by Jewish forces, during the establishment of Israel in 1948 and subsequent wars. The refugees are now scattered throughout the Middle East.

Israel’s hardline foreign minister Avigdor Lieberman said last Thursday that the right of return is not up for discussion….

And it should not be, unless the right of return for descendants of Jews expelled from Medina and countless other non-Muslims expelled from present-day Muslim lands is also on the table.

And how is this goal to be achieved? Let’s go to article 17:Â

Goals and methods. Seems clear enough to me.Â No place for Jews…