* Â China Confidential: the pirates lost the battle; but they and their Islamist allies and friends are winning the war, thanks to the perfidious policy of appeasement, which the Obama administration is taking to new levels.

* Pamela: PRESIDENT HUSSEIN DID NOT GIVE THE ORDER TO SHOOT

Acting like the aggrieved party, in hallowed jihadist practice. “US captain freed; Somali pirates vow to retaliate,” by Todd Pitman and Pauline Jelinek forÂ Associated Press, April 13 (thanks to JW):

NAIROBI, Kenya â€“ Bracing themselves on a rolling warship in choppy seas, U.S. Navy snipers fired three flawless shots to kill a trio of Somali pirates and free the American sea captain being held at gunpoint, a Navy commander said Monday.Angry pirates vowed retaliation for the deaths, raising fears for the safety of some 230 foreign sailors still held hostage in more than a dozen ships anchored off the coast of lawless Somalia.

*Â Â How the Rescue Happened: Â Obambi did not give the order.

“From now on, if we capture foreign ships and their respective countries try to attack us, we will kill them (the hostages),” Jamac Habeb, a 30-year-old pirate, told the Associated Press from one of Somalia’s piracy hubs, Eyl. “(U.S. forces have) become our No. 1 enemy.” […]

Yet Sunday’s blow to their lucrative activities is unlikely to stop pirates, simply because of the size of the vast area stretching from the Gulf of Aden and the coast of Somalia.

“This could escalate violence in this part of the world, no question about it,” said Gortney, the commander of U.S. Naval Forces Central Command.

“Every country will be treated the way it treats us. In the future, America will be the one mourning and crying,” Abdullahi Lami, one of the pirates holding a Greek ship anchored in the Somali town of Gaan, told The Associated Press on Monday. “We will retaliate (for) the killings of our men.”…

Analysis: Why the Somali Pirates Have Already Won 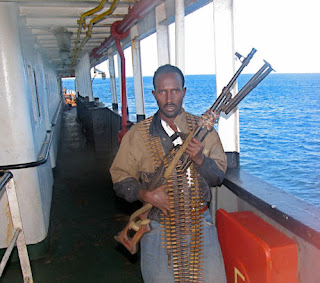 In return for protection from Al Shabab, the pirates will continue to share their ransom money and loot with the Islamist terrorists.Â

The United States will investigate and debate, maybe hold Congressional hearings,Â as proposed by U.S. Senator John Kerry, analyze the root causes of piracy, promise to bring this or that individual to justice, and so on and so forth.

In other words, the U.S. under President Barack Obama will take no meaningful action against those who capture Americans and hold them hostage. Real reprisals that could deter future outrages are out of the question.Â 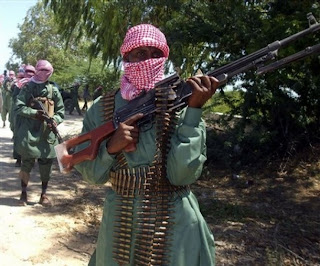 In fairness to Obama, he is following a long, bipartisan, American tradition of appeasing Arab radicals and radical Islam.Â Â

For more than three decades, the U.S. State Department covered up the PLO’s role in assassinating U.S. diplomats. State played along with the convenient fiction that Black September and other groups were rogues beyond the control of PLO chief Yasser Arafat.

Worse, the terrorists were rewarded; the U.S. recognized andÂ engagedÂ them

A blog is insufficient; it would take a book to document and describe the perfidy. To cite a few striking examples, Jimmy Carter betrayed Iran’s modernizing monarch, the Shah, in a craven attempt to curry favor with the Shah’s nemesis, the viciously anti-American, anti-Israel Ayatollah Khomeini. After allowing Americans to be taken hostage in Tehran, Carter bungled a rescue operation in 1980.Â

Three years later, Ronald Reagan cut and ran from Lebanon rather than avenge the death of 241 marines at their barracks in Beirut. Unlike his predecessor, Carter, Reagan talked tough; but he did nothing little.

In 1994, Bill Clinton pulled troops out of Somalia after an angry mob dragged the body of an American soldier through the streets of the capital, Mogadishu, and 18 American soldiers were killed in a disastrous, 17-hour firefight that led to the book and movie Blackhawk Down.

Clinton essentially spit on their graves. Obama is seizing every opportunity to follow his example.

DESPITE the popularity of successiveÂ Pirates of the CaribbeanÂ films, real pirates are not cuddly criminals.

4 thoughts on “Somali Pirates: "In the future, America will be the one mourning and crying. We will retaliate (for) the killings of our men."”