“Obama Did Not Bow To Abdullah” 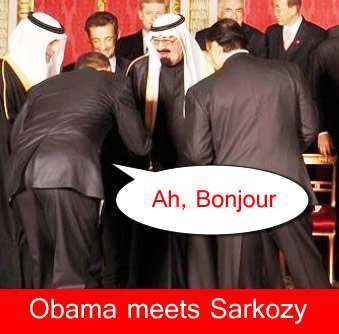 BARACK Obama did not bow to King Abdullah. HeÂ contorted. He did not shake hands. Heextended.

THE White House is denying that the president bowed to King Abdullah of Saudi Arabia at a G-20 meeting in London, a scene that drew criticism on theÂ rightÂ and praise from some Arab outlets.

“It wasn’t a bow. He grasped his hand with two hands, and he’s taller than King Abdullah,” said an Obama aide, who spoke on the condition of anonymity.

Obama was not bowing, he was dipping.

And it wasn’t Abduallh he was meeting, it was him…

Obama wouldn’t go to Normandy, but goes to Istanbul mosque

4 thoughts on “White House Lies: “It wasn’t a bow. He grasped his hand with two hands…"”