Needless to mention that swine flu is caused by Global Warming and the Jooozzz, but you know that…

Some Muslims believe that because they don’t consume pork products, they areÂ immune from swine fluÂ

Generally speaking, Islam prohibits the consumption of pork because it considers the pig to be “unclean”. Many Muslim doctors and specialists have been claiming long before the present plight that pork is a harmful diet. In addition, according to the Islamic belief, consumption of swine-flesh leads to lowliness in soul and demolishes spiritual and moral faculties in any person.

Thus, the news about the symptoms and the infections from the current swine flu virus created a heated debate in the streets, the cafes and internet forums all across the Arab world – will the “scavenger pig” spread also among the Muslims?

A review of some posts loaded in recent days to the internet exposes some kind of optimism among the Muslims. For instance: “Anonymous Coward” wrote: “Muslims are better immune. Did you ever hear of SARS cases in Muslim countries?” Other posts support this view, claiming Muslims will not be infected as they don’t eat the “dirty” pork. This is of course a wrong suggestion as humans do not get swine flu from eating pork.

Unfortunately, they are wrong.

The virus originated through swine to human contact, but today, humans are not being contracted from pigs as the virus has mutated to a human-to-human strain. A single cough of an infected person can transmit the sickness to an entire room full of people.

Having been proven wrong, they are now attributing swine flu’s spread to their own ‘brilliance’:

As always, when such big news spread all over the world, the rumor mills in the Arab world start to work around the clock. The most popular rumor in this regard is that the Muslims themselves created this swine flu virus with the aim reducing the world’s Christian population….

Someone ought to tell them that this is how swine flu really spreads (Hat Tip:Â Instapundit). 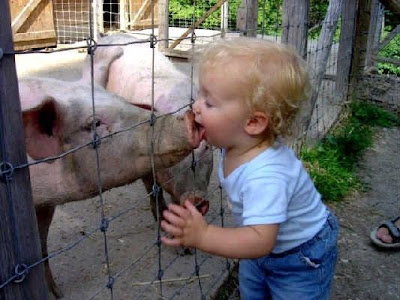