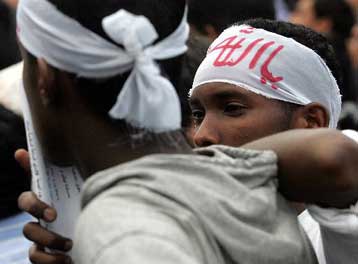 “Proper Behavior Manual” distributed the GreekInternal Affairs MinistryÂ about the attitude towards Muslims. The publication consists of instructions for policemen and how they should behave in order to finish their jobs without provoking anger among the Mohamed followers. About ten days ago a Greek policeman, tore a piece of paper, which had quotes from the Koran by accident and provoked a strong angry wave among the Muslim immigrants in Athens.

The manual advises on how to arrest Muslims in police stations, in what way authorities should enter the mosques, how the Muslim fasting should be respected, the immigrants right to pray 5 or 6 times per day, not to take off the veils from the women’s faces. The policemen are advised to take off their shoes before entering a mosque for check-up, they need to be careful when searching a Muslim house and to abstain from tearing Arab papers, which might turn out to be quotes from the Koran, they also need to be very careful with any amulets they encounter. The authorities have been warned that even the slightest mistake can lead to serious religious riots.

Meanwhile the plan of the Ministry of Internal Affairs about the construction of a immigrant shelter in the Athenian suburb Aspropirgos reached a dead end. The Public properties services refused the decision of the construction, because according to them this will ruin many valuable woods in the region. The Ministry announced that it is searching for another property, in order to build the shelter. This is going to be done with the goal to decrease the number of illegal immigrants around Athen

7 thoughts on “Dhimmitude reaches new hights in Greece: "even the slightest mistake can lead to serious religious riots!"”