Alikhan, like Obama, also wants to help improve America’s image with Muslims around the world. He will now set policy on security at the highest levels of the federal government. But what policies has the new Assistant Secretary embraced? During his years in Los Angeles, Alikhan was responsible for derailing the Police Department’s plan to monitor activities within the Los Angeles Muslim community, where numerous radical mosques and madrassas existed, and where some of the 9/11 hijackers had received support from local residents. Alikhan is strongly anti-Israel; he has referred to the terrorist organization Hezbollah as a “liberation movement. >>>

Earlier this month, at a White House dinner celebrating the Islamic holy month of Ramadan, President Obama said some things that conservative talk show hosts love to rewind and repeat. In the presence of diplomats, business executives and members of Congress, Obama described Islam as “part of America” and hailed “its commitment to justice and progress.” He then called Islam “a great religion.”

His fellow Americans are not so sure. Â More from USA TODAY – He was also a source of information for local and federal authorities on the alert for any criminal activity.

Well, since terrorism has nothing to do with Islam we do have to give him the benefit of the doubt, don’t we? 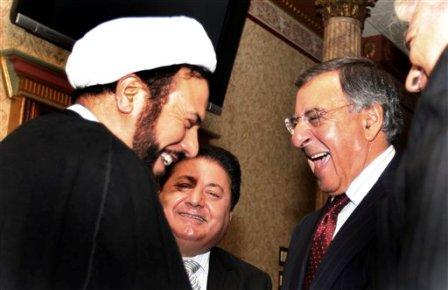 The Ramadan Iftar dinner paid for by youâ€“via the CIAâ€“took place at theÂ Bint Jebail Cultural Center a/k/a “The Hezbollah Social Club,” which is owned and run by open supporters of Hezbollah andâ€“as I’ve reportedâ€“has been the scene of Hezbollah rallies (which I attended undercover) and anti-Semitic, anti-American speeches to thousands of Shi’ite Muslim Dearbornistan residents.

And as I predicted, Panetta kissed the rears of the usual suspects.Â  He was photographed laughing with FBI award revokee, marriage and immigration fraud perpetrator, and “former” Popular Front for the Liberation of Palestine terroristÂ Imad Hamad.Â  Yup, the same Hamad who praised as “patriotic” the Palestinian Authority TV “Children’s Club” programs that teach 3-year-olds to become homicide bombers.