Yid Â with Lid: US Terrorist Group CAIR Tells Florida Court There’s No Such Thing as Honor Killings in Islam

“A Muslim teen who fled from Ohio to Florida after becoming Christian swears her father will kill her if she goes back home. Florida authorities appear willing to take that chance.”

I guess we can all go home now.Â  The lawyers for the parents of Rifqa Bary assured the court today that there is no such thing as honor killing in Islam. The attorneys who are employees of CAIR said that Rifqa’s concerns were unfounded. And if CAIR says so it must be true.

What they ignored is the major question, why are employees of an organization named by the DOJ as a sponsor of terrorism allowed to operate as lawyers in the United States. It seems to me that they should be in court as defendants, not attorneys.

Sheik sez: What’s the world coming to? Nothing is Islamic anymore, not even Islam. FGM? Tribal. Child marriage? Un-Islamic. Killing of apostates? Not in the Koran. Sharia? Ancient rulings. Killing unbelievers? Figment of your imagination. Child marriage? The Joozzz do it too. Â Jihad? No such thing. Terror? That’s the Jooozz who are causing it. Â Burqa, hijab, niqab: nothing to do with Islam, biblical dress! Killing of homosexuals? Watch Pat Robertson, he’s worse! Hate-preachers in the mosques? Un-Islamic! Â Hey, what are you? Some kind of Islamophobe?

Islamism: A Muslim teen who fled from Ohio to Florida after becoming Christian swears her father will kill her if she goes back home. Florida authorities appear willing to take that chance.

The state believes her fears are unfounded after talking to the devout Muslim father and his lawyers, who work for the Council on American-Islamic Relations. And it’s expected to return her to his care.

Florida conducted a juvenile hearing after the father sued to regain custody of his 17-year-old daughter â€” Fathima Rifqa Bary â€” who sought shelter with a Christian family in Orlando after he allegedly threatened to kill her for changing her religion.

In their report, Florida authorities found: “Ms. Bary’s concern that she may be killed because of her conversion from Islam to Christianity remains a subjective and speculative concern.”

Based on the facts of the case â€” along with prior Muslim father-daughter “honor killings” inside America â€” we would argue that the concern is, on the contrary, very real. Consider that:

â€¢ Bary swore in a court filing that her father confronted her in her bedroom and said: “If you have this Jesus in your heart, you are dead to me!” And then, picking up a laptop as if to hit her, he allegedly added: “I will kill you!” A friend reported the incident to local police.

(The father, Mohamed Bary, admits grabbing the computer but says he meant only to throw it. He denies threatening her life.)

â€¢ The daughter also swore that her father punched her in the face on the way to mosque one day because she complained about wearing a hijab. (The father denies striking her.)

â€¢ Bary also testified her family’s radical mosque told her father to “deal with the situation” of her Christian conversion, a thinly veiled reference, she says, to honor killing.

The CAIR lawyers assured Florida investigators that there’s no such thing as honor killings in Islam. In fact, there is a requirement in Shariah, or Islamic, law for killing publicly declared apostates, and Bary announced leaving Islam on her Facebook page.

CNN and others in the mainstream media have made an issue of Bary’s truthfulness, and some details of her story don’t hold up. Notably, she said she hid her cheerleading because she feared her father’s disapproval.

But investigators say they saw photos of the girl in her cheerleading uniform prominently displayed in the family room of their Ohio home. (It’s not clear when the photos were put up, however, and investigators confirmed that at least the mother had denied her permission to join the squad.)

Bary’s mother told authorities that her husband believes that if their daughter returns home, she should practice Islam as long as she’s underage and living under their roof. What if she doesn’t? What then? 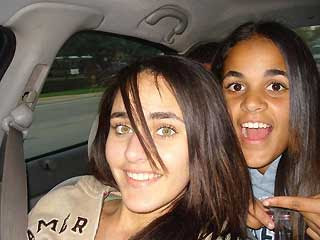 Honor Killing is such a stupid expression. There is no honor in this kind of cowardly killing. New Years eve two years ago, Yaser Abdel Said killed his two teenaged daughters Sarah and Amina Yaser in cold blood, shot them both because they became too westernized and they had non-Muslim boyfriends and then he ran away like the coward he is.

On December 31,Â  2006 the phone rang at Irving police dispatcher about 7:30 p.m. It was Sarah Said on the other end she kept saying over and over:

That was an Honor Killing despite what the attorneys paid for by the terrorist group CAIR say. And the court cannot let the same thing happen to Rifqa Bary