from the Elder of Zion

Those Jews keep coming up with innovative criminal acts.

The journalist who is trying to start an intifada

Last week a group of extremist Jews attempted to gain access to the compound housing the Al-Aqsa Mosque, but were prevented from doing so by Israeli police. The group performed religious rituals in the streets adjacent to the site,Â using dance ceremonies to antagonize local shop owners…

I hope that this is placed front and center on the special UNHRC session today as the severe human rights violation it must be. Dancing by Jews in the area of the Temple Mount should be criminalized, of course, because (like their walking, prayer, meditation and breathing) it antagonizes a billion Muslims.

By definition, anything that Arabs or Muslims find offensive must be, in fact, illegal. That is certainly the premise behind the UNHRC, which seems dedicated to the elimination of just one such instance of this offensiveness

Throughout the events on the Temple Mount over the past couple of weeks, there was plenty ofÂ incitement by Palestinian Arab clerics like Sheikh Tamimi and Sheikh Raed Salah, who publicly claim daily that Israel is planning to divide and destroy the Temple Mount.

However, carefully reading the Arab news media, none of them were able to point to anything that the Israelis actually did that upset the Temple Mount’s status quo. All news accounts showed that the Jewish (or foreign) visitors did nothing disrespectful and that the fighting began when Arab worshipers attacked the visitors after being whipped up with rumors from the previous week that extremist Jews were planning to “storm” the Al Aqsa Mosque. As Ma’an reportedÂ initially:

On Thursday, the Al-Aqsa Foundation had warned of anÂ impending incursion. Officials in Jerusalem said extremists were preparing toÂ break into the holy Muslim area, and accurately predicted that theÂ break-in would occur on Sunday under the pretext of celebrating a religious holiday.

Confrontations erupted after groups of IsraelisÂ broke into the compound, reportedly under the guard of Israeli police.Â Palestinians hurled stones, chairs, and shoes at the Israelis, while police tried to disperse the Palestinians by force, injuring nine people right away, and four more throughout the morning.

Ma’an laterÂ changed the story but even now it is clear that the violence was started by the Arabs:

According to witnesses, clashes broke out after a group of about 150 Israeli settlers entered the Al-Aqsa compound on Sunday morning, reportedly under the guard of local authorities who alsoescorted the group away from the area when worshipers began to protest.

It turns out though that Khalid Amayreh, an Arab journalist who has a long history of insane hate against Israel,Â specifically lied about what happened at the time – to the Islamic world as a whole, atIslamonline.net:

“As many as 70 policemen attacked us indiscriminately, young and old, with full force, using rubber-coated bullets, truncheons, tear gas and evenÂ poisonous gas.”

The intruders soon began, under police protection,Â performing Talmudic rites and making slogans calling for the destruction of the Islamic holy shrine.

Muslim guards as well as ordinary worshipers chased the Jewish zealots out. 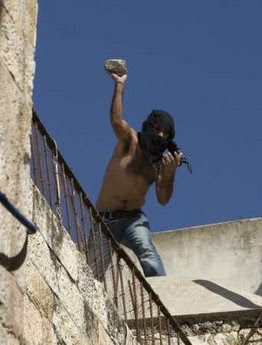 “The police chased worshipers inside Aqsa Mosque, where the soldiers fired heavily into the holy place, causing many people to suffocate as a result of gas inhalation,” said Atta.

“I saw the police gang up on young people,beating them mercilessly. The police were not out to maintain law and order. They just wanted to retaliate and punish us for repulsing the fanatical settlers.”

“Hence it is the responsibility of the entire Umma to protect and safeguard this holy place fromZionist plots and evil designs,” Sheikh Sabri told IOL.

Israeli religious leaders, including Knesset members, are making no secret of their schemes regarding Al-Aqsa.

Amayreh, using the time honored journalistic method of finding an “eyewitness” willing to lie to fit his agenda, helped stoke the hatred throughout the Muslim world.

He, andÂ other Islam Online reporters, regularly exposeÂ dastardly Zionist schemes to destroy Al Aqsa, doing everything they can to push Arabs to violence.

Amayreh followed up with a “man in the street”Â interview specifically asking Arabs if they want to see a third intifada in the face of these Zionist plots to have Jews visit their holiest site:

“There is no question that we need a huge uprising in order to extricate ourselves out of the present predicament.”We need an intifada not only in occupied Palestine but all over the Arab world. We need an intifada against the Israeli occupation, the Palestinian Authority and the corrupt Arab regimes.”

“In physics, excessive pressure leads to explosion or implosion. I think the frustration level in occupied Palestine has reached the explosive point.”

“I think a religious intifada can be expected if Israel continues to provoke Muslims as it has been doing of late.

“If the cause of Al-Aqsa Mosque won’t provoke Muslims, then what would provoke them?

“However, we need more than just a willingness to die as martyrs for Al-Aqsa. We also need to carefully plan the outcome of any prospective intifada. We must carefully and thoroughly study the first two intifadas and make sure that we don’t repeat the same mistakes.”

“I think if Israel goes too far in its efforts to take over parts of Al-Aqsa Mosque, an intifada, even a big one, will be inevitable.

“After all, Muslims, especially Palestinians, wouldn’t just sit idle while their holiest place is desecrated and raped by the herds of Zionism.

“But, let me be frank about his. The Palestinians alone can’t defeat Israel. We need to have meaningful and tangible Arab-Muslim support in order to be able to wrest our rights from Israeli hands.”

Amayreh is also very much against the PA, moderate Arab governments and any peace with Israel, so he makes sure that the seemingly random interviewees adhere to his own politics and radicalism.

In short, Khalid Amayreh is waging a campaign to start a new wave of terror against Israel under guise of his being a “journalist.”

Just to prove the point:

The victims were “were enjoying [fire]crackers on Diwali night when they were attacked by Muslims of Nagorivad.” Will the Islamophobia never end?

Minority Hindus were attacked again by Muslims in Ahmedabad’s Shahpur area, this time on Diwali.

According to sources, the minority Hindu people in Shahpur’s Nagorivad and Ghanchi na dela locality were enjoying crackers on Diwali night when they were attacked by Muslims of Nagorivad. Muslims – Mohammad Saijad Mohammad Hissain Luhar, Nadim Lukman Luhar, Mohammad Nazeer Aslam Nagori, Farhan Faruk Nagori, Isfakbhai Nagori. According to sources, the Muslims first objected firing of crackers and then start attack on Hindus. Heavy stone pelting on both sides following this invited police to intervene. Police have detained five Muslims in this case.

Meanwhile, back in once great Britain:

Schools are being ordered to close on Muslim, Hindu and Sikh holy days

This is of course nothing but pandering to the Muslims. Hindus or Sikhs were not even demanding any religious holydays for their communities.

Schools are being ordered to close on Muslim, Hindu and Sikh holy days despite objections from teachers.

The directive by two London councils means the schools must shut for the annual celebrations of Eid-Ul-Fitr, Diwali and Guru Nanak’s birthday in addition to the traditional Christian holidays of Christmas and Easter.

The policy even affects schools with only a small number of Muslim, Hindu or Sikh pupils.

The victims were “were enjoying [fire]crackers on Diwali night when they were attacked by Muslims of Nagorivad.”
………………….

From the “Pact of Umar”–the 7th-century letter from the oppressed Christian population adopting the strictures of dhimmitude in exchange for some slight protection from constant Muslim depredations:

Now, Hindus were never formally regarded as dhimmis, as were “People of the Book”–Jews and Christians. But given the huge Hindu population of India–even the Muslim invaders couldn’t convert or kill them all–Hindus wound up being treated as ipso facto dhimmis.

And here are Hindus, essentially “manifesting their religion publicly” and “raising their voices and displaying their religious symbols”–in other words, breaking the unwritten pact in a Muslim-majority area.

More from the Pact of Umar:

“We accept these conditions [there are many, many more strictures, marking dhimmis as second-class citizens, inferior to the Muslims in every way] for ourselves and for the people of our community, and in return we receive safe-conduct.

If we in any way violate these undertakings for which we ourselves stand surety, we forfeit our covenant [dhimma], and we become liable to the penalties for contumacy and sedition.”
………………….

By so publicly and joyously celebrating Diwali, the Hindu Festival of Lights, these Hindus essentially broke the unwritten pact, and lost their protective safe-conduct–laying themselves open to attack from Muslims.

I just hope the Indian authorities don’t wink at this incident, since it occurred in a Muslim-majority area, and treat this attack as the violent crime that it is.