Shaker Assem, Â your ayatollah in a suit:

Shaker Assem, like his coreligionists Tariq Ramadan or Azzam Tamimi, wears suits and ties and works towards the Caliphate. Shaker, like so many Mohammedans who have had a Western education, is an enemy agent and an Islamic agit prop. Unlike the masses of poor, primitive Mohammedans who pose no imminent threat to our way of life, it is the educated types like Shaker, frere Tariq and Azzam who know much more about us than we know about them.

Our Austrian correspondent AMT sends the following translation of an interview with Hizb ut-Tahrir spokesman Shaker Assem. The translator includes this note:

This interview is part of a booklet containing interviews with more or less famous people from all walks of life in Austria. It was published byÂ Die Presse sometime in early 2009 and was never available online.

In the excerpt below, Shaker Assem is interviewed by Peter Babutzky: 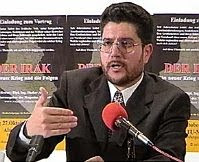 Shaker Assem, 44, was born in Cairo to a Muslim Egyptian father and a Catholic Austrian mother. Following his father’s death he moved to Austria at the age of 16. He finished high school and studied engineering at the University of Vienna, after which he taught at a technical high school. “This was my most enjoyable job,” he says of his time as a teacher. Still, he decided to move to Germany where he became a media spokesperson for Hizb-ut-Tahrir.

Every religion is in opposition to democracy

Shaker Assem is the media spokesperson for the Islamic liberation party Hizb-ut-Tahrir. This radical party of Islamists boasts 20,000 members worldwide. In this interview Assem speaks about “legitimate” suicide attacks, homosexuality being a crime, and why a woman cannot be the leader of a state.

In one of your speeches you said the the incest tragedy of Amstetten [where a father held his daughter captive in a dungeon and fathered seven children with her] would not be possible in a truly Islamic state. Why?

Extramarital sexual relations are considered a heavy crime. The rape of a family member is mind-blowing to a devout Muslim. All of this starts with the fear of God. If humans are convinced that God is constantly watching them and will be held accountable, then this is already a deterrence. Of course there are also crimes in an Islamic state, but that is why we have laws.

In your Islamic state homosexuality would also be considered a “crime” which could lead to the death penalty.

It depends on how this homosexuality is lived. But it is a crime and can be punished by the death penalty.

Your constitution states that a marriage between Muslims and non-Muslims is not permitted. Are you against love?

No, I am not. Islam permits Muslim men to marry Jewish and Christian women. I myself am the product of such a relationship. But a marriage between a Muslim and Hindu would not be possible.

The Quran says so. It is not possible.

Do you never doubt the Quran?

No. My beliefs are rational. I approached the study of the Quran in a rational way, and the rational pieces of evidence convinced me of its accuracy.

What do you actually think is so terrible about the democratic system?

Whenever a Mohammedan opens his mouth, he lies.

” The rape of a family member is mind-blowing to a devout Muslim.”

A dollar for every Mohammedan who is guilty of raping a family member, and I’ll buy the worlds biggest yacht and we’ll cruise the seven seas for the rest of our lives! Latest updates: (authorities investigate child abuse in mosques)

“My beliefs are rational”

Belief is just belief. Belief that defies science, free scientific enquiry, tolerance and civilization is not rational. Superstition is never rational. This guy (Shaker) Â is about as rational as the flying Spagetti monster.

“The secular, capitalistic world order did not lead humans out of poverty, but increased it.”

It amplified Mohammedan poverty because it prevented them from looting infidel countries, which is the only thing that ever enriched the Mohammedans Â (apart from undeserved oil-wealth)

“Austria is not my enemy…”

Shaker, the Muselmaniac, is the enemy of Austria.

“Every religion is in opposition to democracy. . The Catholic church is also undemocratic. We have to draw the line somewhere.”

We did draw the line. Now we have to draw more lines and stop the Mohammedan advances dead in their tracks.

“former German minister of interior Otto Schily openly declared that he did not want our party to gain more influence.”

The ex-terrorist sympathizer Otto Schily educated himself about Islam. He was getting really good at it….

“It is impossible for a Muslim to be anti-Semitic because it goes against Islam. Please do not forget that Jewish prophets are also prophets for us. One must differentiate between anti-Semitism and anti-Zionism. We are not against the Jewish faith but very much against Zionism.”

Shaker, you are full of shit. Read the Koran and the hadith and you will know that the soldiers of Allah have a genocidal mandate to wipe out the Jews. There is no distinction between Jews and Zionism. Besides, Mohammedans don’t respect any Jewish prophets. They are just about to build a mosque over the grave of Ezekiel in Iraq.

What’s good for the goose is sauce for the gander. In that case mass expulsion and mass extermination of enemy Mohammedans is also justified.

“Israel is an occupying state. In Palestine there are people who were displaced from all over the world.”

Jews, Israelis have been displaced from all over the world. The Pali Arab parasites could have been resettled 60 years ago. All countries that are occupied by Mohammedans were acquired through conquest. Why should Israel not have the right to reacquire their own biblical land through conquest?

“We want bring about a change in society through persuasion, but clearly by peaceful means..”

“We are strongly against terror attacks. There are many differences between us and Al Qaeda, especially concerning methods. The prophet worked towards an Islamic state for a long time. But for the founding of this state he opposed the use of force and did not shed a drop of blood.”

Terror is mandated in the Koran and the hadith.

MUHAMMAD HAD FOLLOWERS WHO MISSED PRAYER AND THEIR FAMILIES BURNT ALIVE IN THEIR HOMES. (In fact he himself set their houses on fire!)

MUHAMMAD ACTED LIKE POL POT: At the Massacre ofÂ BanuÂ Quraiza, Prophet Muhammad personally assisted in the beheading of 600 to 900 Jewish men and in order to distinguish young Jewish boys from young Jewish men ordered their pantsÂ Â pulled down and groin area inspected for pubic hairs by his killer-bandits, Â known as â€“ the Companions.Â Â Those boys with the slightest growth of hair were dragged away and beheaded.Â Â The Jewish women were raped and those not made sex slaves were sold along with their children into slavery.

BukhariV4852N220 “Allah’s Apostle said, ‘I have been made victorious with terror”

Shaker, you are a a lunatic and a pathological liar. Â You are a ticking time bomb. Â There are means and ways to deal with Â people like yourself….