In response to the Islamic terrorist attack on Northwest Flight 253 by Umar Farouk Abdulmutallab, the usual suspects are holding press conferences fertilized with the usual, predictable, empty condemnations of Al-Qaeda, while they refuse to condemn Hezbollah, HAMAS, Islamic Jihad, the Muslim Brotherhood, and pretty much every group and person who has murdered and continues to attempt to murder U.S. citizens as part of the Al-Qaeda Network. 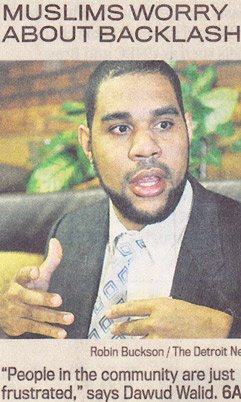 In Detroit,Â Dawud Walid a/k/a Delano Anthony Willis, Jr. (a man with a significant criminal rap sheet), Executive Director of CAIR-Michigan, told the media that Muslims are “worried about backlash” and, “People in the community are just frustrated.”Â Â Whatchoo Talkin’ ‘Bout Willis?!Â  That’s chutzpah, but we let him get away with this outrageous response.Â  So he continues with it.

When will the day come when Muslims are “worried about Americans being murdered by their fellow co-religionist” and when “People in the community are just frustrated”â€“not to mention, embarrassedâ€“by that?Â  NEVER.

Instead, the Islamic community is uppity, indignant, and self-righteous about this BS “backlash” that never has happened, and unfortunately, never will.Â  If only there was “backlash,” we’d have less of these attacks and less whining-with-no-basis Muslims.Â  But we simply don’t have the guts.Â  We don’t even have the guts to yank a guy’s visa, when his own Muslim father says he’s a terrorist.