Is Time a Muslim Magazine? (by Phyllis Chesler)
Sultan Knish

Over the last year every time the media sensed that it might be on the losing side of an argument, it began shouting “Bigot”. When ObamaCare and the Big Bailouts began floundering in the polls and meeting up with populist protests, the media began running stories accusing the protesters of being bigots, while claiming that “Socialist” was actually a racial slur. Now the media and its political agenda is once again on the wrong side of the American people over the Ground Zero Mosque, and once again the media is playing the bigotry card. 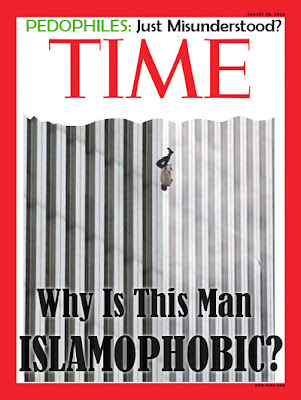 At times like these it’s all too obvious why liberals have been so determined to co-opt race, because it gives them an open ended smear to use in virtually any situation. In the Obama Era, the media has been certain that the very presence of a half-black politician behind their agenda, meant they had an unlimited use of the race card. They were wrong. The media’s smears have resounded only inside liberal echo chambers, and their constant attempts at exploiting a serious problem, for their own political advantage has rebounded on them.

But even as many prominent Democrats are cutting and running, the media has decided to make a last stand over the Ground Zero Mosque, in their time honored fashion of yelling, “Bigot” over and over again. The members of our red fourth estate, who graduated from shouting “Bigot” at college campus protests, to penning long articles for major newspapers about America’s history of bigotry, have only adopted a more sophisticated way of shouting “Bigot”, while showing their contempt for the vast majority of Americans who oppose the Ground Zero Mosque.

The same “courageous” activists of the press, who are busy scribbling and babbling their condemnations of American bigotry– quietly censored themselves when it came to standing up for freedom of speech against the cartoon beheaders. Because while they might lie to the public about being afraid of the Tea Party Movement or the Ground Zero Mosque protesters, they can’t lie to themselves. When the door is closed, and the shades are drawn, and it’s just them and their Mac Book Pro, it’s not the Tea Party they’re afraid of. It’s Ahmed and his axe.

Condemning Christians in America or Jews in Israel earns you a Pulitzer. Condemning Muslims in the Islamic world, earns you a jail term or a funeral. Over here, they “courageously” denounce American bigotry. In the Muslim world, they whitewash the real story so the local regime doesn’t put them on the next plane back to where they came from. For their own safety. That’s why a video by a US soldier or a Facebook photo by an IDF soldier will be front page stories. But the treatment of Copts in Egypt, Hindus in Bangaldesh or Kurds in Turkey will be buried somewhere far out of sight.

So who are the real bigots?

There is hardly a Muslim country where Christians, Jews, Hindus, Bahai and others are not second class citizens. By contrast Muslims have been given equal rights in America, Europe and Israel. Yet that’s not the image you will get from the media, which will accuse non-Muslim countries of bigotry, without daring to hold Muslim countries accountable for institutionalized discrimination with its roots in Islamic Sharia Law. The media has declared that the Muslim version of Jim Crow is just fine and dandy, and that the real problem is that some Americans couldn’t help but notice that 9/11 happened. 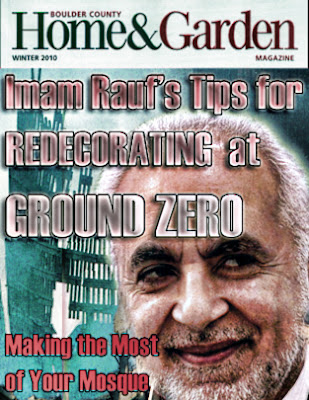 Some Muslims have actually shown better judgment on the Ground Zero Mosque, than the media has, by recognizing that it is a bad idea. Had the media done its job of reporting the news, instead of shrilly editorializing for its own political agenda, more might have been able to reach that conclusions without having to wait for the polls, which showed that the vast majority of Americans and New Yorkers were opposed to the project. Instead it looks like Imam Rauf will be exposed as a hatemonger, and those politicians and the press that got behind the Ground Zero Mosque will be the ones on the wrong side. And because the media insisted on turning this into a referendum on Islam, they will have accomplished exactly what they claimed to be fighting against. The characterization of Islam as an ideology that encourages violence and disdains America, even when it operates on American soil.

And so the media is giving it its last best effort. It’s warning us that America will look hostile to Islam if it does not allow the Ground Zero Mosque to be built. Yet up until September 11, plenty of mosques were built in America. Yet that did not prevent any of the Muslim terrorist attacks that occurred up until that time. The presence of mosques did not serve as a shield in Manhattan then. It certainly isn’t going to now. Sensitivity will not save us. Neither will a willingness to bend over backward to our enemies. Such behavior is not only foolish, it actually provokes attack.

If sensitivity were the issue here, it would be far more incumbent on Muslims to show sensitivity to 3,000 American dead, than for Americans to show sensitivity to a grandiose Muslim building project in a part of America where there is no Muslim community. Think about it. In every culture, respect for the dead is a basic value. And those who do not respect the dead of another people, similarly show that they do not respect the living. That matter of disrespect to Americans, both living and dead, has sharpened the situation. And all the doubletalk in the world from Park51 won’t change that. And if the situation were reversed, and an American church was being built in a damaged building in Afghanistan, near a spot where thousands had died in Coalition bombings, there is no doubt whatsoever whose side the New York Times editorial would come out on. But that’s because like Imam Rauf, the Times staffers respect Muslim dead, just not American dead.

Finally the media dragged out the “Freedom of Religion” argument, claiming that mosque opponents are undermining the Constitution. But the First Amendment provides unlimited protection to freedom of religious belief, not freedom of religious practice. If it were otherwise, houses of worship would not be subject to zoning laws. Or any laws for that matter. And since Ground Zero Mosque defenders have already argued that it is not a religious building, but some sort of 13 story community center (in a neighborhood without an actual Muslim community), they have already contradicted their own argument. They cannot argue that the building is both religious and non-religious at the same time.

But don’t count on the media to hold to any intellectually consistent standards. The same media that attacked Dr. Laura for using a racial slur, will ignore Imam Rauf’s use of the same racial slur. The same media that criticized Israel’s reconstruction of the Hurva synagogue in Jerusalem, destroyed in the Jordanian ethnic cleansing of Jews from East Jerusalem, insists that any impediment to the Ground Zero Mosque is a horrifying testament to American bigotry. 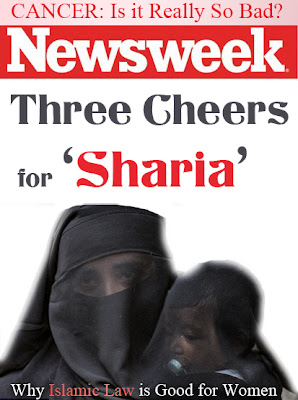 In March, the same New York Times which has been going on a tear about any resistance to the Ground Zero Mosque, described the timing of the Huvra rebuilding as “unfortunate” and quoted Muslims who were worried that from certain angles, the synagogue would appear to be taller than some mosque (a no-no for infidels under Islamic law). The LA Times equated the rebuilding of the synagogue with “extremism“. Reuters quoted ominous warnings about the synagogue being part of an effort to “Judaize“, Jerusalem. The media did not angrily condemn Muslims for their intolerance of the rebuilding of an ancient Jewish house of worship. But that is the double standard. And it is part of the reason why people are so upset.

If Muslims actually extended tolerance, instead of only demanding it– we wouldn’t be in this mess in the first place. Instead Muslims demand the right to do what they want in non-Muslim countries, while insisting that non-Muslims abide by a rigid code of behavior in Muslim countries. American female politicians must accept their inferiority when visiting Muslim countries by wearing a headcovering that symbolizes female submission to men. British tourists have been arrested for a casual kiss in Dubai. And the media defends all this by saying that Muslims have the right to set the rules in their country. Yet apparently we don’t have the right to do the same thing.

This is not about bigotry. This is about the media’s moral and physical cowardice in refusing to stand up to actual bigotry around the world. And the victims of their silence include both non-Muslims and Muslims. Meanwhile the media can continue shrieking about bigotry. It will not win them the argument, all it will do is further devalue the accusation. Because you can only cry wolf for so long, until people stop paying attention. And when you refuse to cry wolf at an actual predator, while crying it at everyone you dislike, then no one will end up listening to you at all.

4 thoughts on “Who are the Real Bigots?”