The Moslems are stuck. For the soldiers of allah “dialogue” means da’awa, calling the unbelievers to Islam. This is about “inviting” the Jews to embrace Islam,Â  about mending their ways, “to follow the right path”,Â  to stop denying that Muhammad was the last profit, to admit that the rabbis forged the scriptures that announced the coming of the holy profit, and to submit, or else.Â  Of course the sons of apes and pigs are always welcome to accept their natural status as dhimmies, to live as “protected people” underÂ  the benevolent rule of Muslims, but we all know that the Jews are the “vilest of creatures” devoid of logic and common sense who will -once again- reject this generous offer toÂ  ‘revert’…… 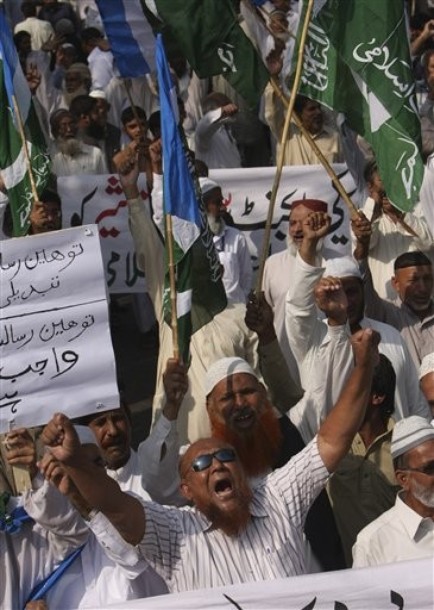 Scholars at the oldest Islamic university in the world issued a proclamation on Tuesday that lifted an ancient ban on dialogue with Jews, The Jerusalem Post has learned.

The statement drafted by Sheikh Fawzi al-Zifzaf, chairman of the permanent committee for dialogue at Al- Azhar University in Cairo, was read during a gathering of senior faith and political leaders at Parliament in London.

“And the point of origin of this invitation is Islam itself [calling for] brotherhood and mutual understanding and the strengthening of bonds between Muslims and followers of the other religions, and the establishment of bridges of dialogue with scholarly institutions in Europe and America,” Zifzaf wrote.

The event was hosted by the Children of Abraham charity and Al-Azhar Institute for Dialogue with the Monotheistic Religions.

The Egyptian Sunni institute, founded in 970 CE, has had open channels of communication with Catholics and Anglicans since the 1990s; however, until now, it has had no direct talks with Jewish scholars.

While the proclamation did not mention Judaism by name, a spokesman for the grand mufti of the UK and alumnus of Al-Azhar, Sheikh Prof. Mohamed Elsharkawy, told the Post on Wednesday that its message was aimed at a Jewish audience.

“You’ve got to understand there are extreme sensitivities,” the spokesman said.

“I’m not at liberty to say how hard it was to draft the document. In the process, the people who have taken the document forward have done so at great risk and danger, and so they’ve done that very carefully. There already exists a dialogue with Christians, so anyone with two brain cells can add up to what is being said here.”

I won’t be holding my breath.

The Elder has more>>

They steal, they lie, they kill. And the world kisses their ass. (Pamela Geller)