Tragic news from the coast of East Africa, where SomalianÂ Islamic terrorists (euphemism:Â  “pirates”) murdered four innocent Americans whose only “crime” is that they were sailing the world on a yacht . . . and that they are American, non-Muslim, White, and Western.Â  Oh, and they were Christians with Bibles.Â  Can’t have that in the “tolerant” Islamic world.Â  Remember this the next time you are told that it’s “wrong” to refer to the Somalian “pirates” truthfully as the Islamic terrorists that they are.Â  Remember this the next time scumbags, idiots, and morons who’ve appointed themselves the apologists for Islam tell you that these Islamic terrorists, er . . . “Somalian pirates” aren’t terrorists because they just want money and don’t murder their captives.Â Riiiight. And I’m sure these “pirates”‘ ties to Al-Qaeda’s Al-Shabaab means nothing, too, per usual. Â (Schlussel)

Bleeding hearts anyone? 6-year olds plant mines and 12-year olds behead ‘traitors’ in Afghanistan. The 14-year old ‘Canadian Taliban’ Omar Khan threw a hand-grenade which killed a CIA operative. Â If you apply western standards to these barbarians you are certifiably insane. 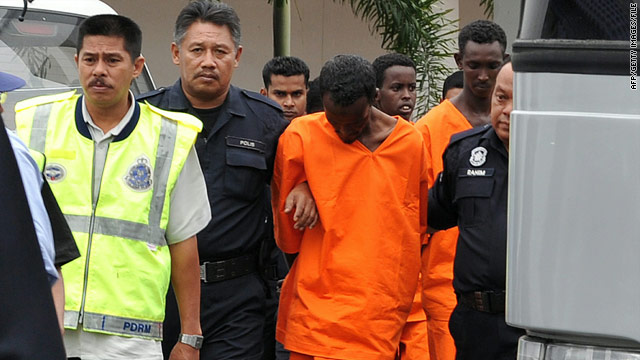 Why not death by hanging? Why not blow them out of the water? The Russians see no point in feeding these creeps for 34 years: Â WatchÂ this video that one of the Russian sailors made during the rescue and the pirate vessel that was “set adrift” and you can decide for yourself why the pirates “likely died at sea.” Here is anotherÂ video of the Russian Navy “pacifying” Somali pirates.

NAIROBI, Kenya â€“ Four Americans taken hostage by Somali pirates off East Africa were shot and killed by their captors Tuesday, the U.S. military said, marking the first time U.S. citizens have been killed in a wave of pirate attacks plaguing the Gulf of Aden and the Indian Ocean for years….President Barack Obama, who was notified about the deaths at 4:42 a.m. Washington time, had authorized the military on Saturday to use force in case of an imminent threat to the hostages, said White House spokesman Jay Carney….

He identified the slain Americans as Jean and Scott Adam, of Marina del Rey near Los Angeles, and Phyllis Macay and Bob Riggle, of Seattle, Washington.

The Quest was the home of the Adams who had been sailing around the world since December 2004 with a yacht full of Bibles….

“Some pirates have even suggested rigging the yacht with land mines and explosives so as the whole yacht explodes with the first gunshot,” said the pirate, who gave his name as Abdullahi Mohamed, who claimed to be a friend of the pirates holding the four Americans.

Graeme Gibbon-Brooks, the head of Dryad Maritime Intelligence, said he was confounded by the turn of events.

“We have heard threats against the lives of Americans before but it strikes me as being very, very unusual why they would kill hostages outright,” he said, adding that the pirates must realize that killing Americans would invite a military response….

Really? In the age of Obama?

Pirates â€” who currently hold 30 ships and more than 660 hostages â€” typically win a multimillion ransom for releasing their captives, a huge sum that is shared among investors and pirates. The money is often spent on alcohol, drugs and prostitutes. One ransom paid last year was reported as $9.5 million. Most ransoms are worth several million dollars.Given that typical financial motivation, Tuesday’s killings left several unanswered questions, such as whether the four hostages had tried to take over the yacht from the pirates, or if the American forces spooked the pirates by approaching the yacht….

Or maybe the Bibles irked the pirates.

5 thoughts on “Pirates are just "teens" for the Caliphate Networx”