The Dutch are smarter than the average legislators 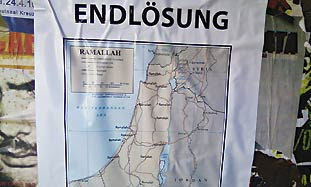 Received by email from someone in Holland:

Abbas is in Holland.

Here is a summary of today’s headlines.

PVV and SGP (orthodox Christian party) boycotted the meeting with Abbas in the parliament.

PVV spokesman: “We do not deal with a holocaust denier”.

He explained why he thinks so: “on one hand Abbas wants a two state solution but on the other hand is working towards the destruction of Israel”.

PM Rutte :” Independent Palestinian State can only be established by means of negotiations with Israel”.

FM Rosenthal said Abbas should return to the negotiation table, he also said that Gilad Shalit should be released immediately. Abbas did not comment. However, Abbas did comment on the call for negotiations, he said that he was willing to negotiate but also said that if negotiations do not come into being going to the UN is inevitable. To which Rosenthal responded that in that case the Netherlands will not support the statehood bid.

This from the country that just acquitted Geert Wilders on charges of incitement. The PVV is Wilders’ party.

InÂ this interview (in Dutch) Abu Bluff finally seems to accept that six million Jews died in the Holocaust. Of course, it’s not in Arabic, so it won’t make that much of a difference.

If only the Israeli government had the junk to say “We won’t meet with a Holocaust denier.”

6 thoughts on “Abbas encounters Dutch Resistance: "We won't meet with a Holocaust denier."”