I wrote the song ‘Tolerance’ back in 2006, hoping it wouldÂ Â shake your windows and rattle your wallsÂ for the times they are a-changin’.Â Unfortunately, we got Hope’nChange instead…..

In hindsight, I may as well have written a song about dental floss in the hope that people’s teeth would get cleaner. But don’t take my word for it, listen to Sabatina James:

The Fraudulent Strategy of Tolerance and Dialogue

Back in October we postedÂ an article about Sabatina James, a former Muslim who now lives in Germany and speaks out courageously on behalf of apostates.

The article below about Ms. James appeared a couple of weeks ago inÂ Politically Incorrect. Many thanks to JLH for the translation: 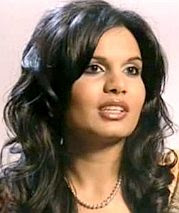 The latest edition ofÂ Der SpiegelÂ offers Islam-critics a real treat: a four-page report on ex-Muslim Sabatina James who is known not to be reticent on the subject of the Most Peaceful of All Religionsâ„¢. Editor Matthias Matussek â€” who until recently had a link to PI on his homepage â€” features the courageous woman, who is under permanent personal protection in Germany. She provoked him with the right words: “You will never publish something like this. You politically correct jornolists are too cowardly for that.”

She was referring to her portfolio of horror pictures of beheaded Christians. Matussek describes them as “splatter photos from the hot zone of the battle of faiths in the 21st century.” Of course, he did not publish any of these pictures â€” that might make the negative popular opinion even worse, and even this most Islam-critical author ofÂ Der SpiegelÂ is not up to that. For the rest, however, his article offers several tough-as-nails comments by the attractive woman from Pakistan, who gives a merciless accounting of her former religion. She has decisively turned away from Allah and the Prophet, of which her father said:

“Anyone who turns her back on our faith has earned death.”

Since then, she has been on the run. From her own family and any possible commissioned Muslim murderers. Despite this permanent threat, she fights on undeterred and continues to explain things Besides that, she promotes Christianity, whose message of loving your neighbor seems to have pervaded her. She is “on a mission,” as noted by the village minister who baptized her.

“What would you do if leaving the Church was punished with death?”

“How much tolerance would you have, if someone was going to kill your children because they have Christian given names?”

All of this can be read on the first double page of the fascinatingSpiegelÂ article. But it gets better: She calls Islam “religious fascism.” “German understanding” for this totalitarian ideology she calls “blind.” For her, the only “sensible politician” in this country is Family Minister Kristina SchrÃ¶der, who, revealingly, had a link to PI on her homepage in 2007 and 2008. The estimate of 3,000 forced marriages published by SchrÃ¶der is “ten times” what Sabatina estimates. Commenting trenchantly on Mrs. Merkel’s silence:

And the chancellor says nothing about being ashamed that such a thing is happening in Germany.

She coldly sloughs off the Turkish prime minister, who in all seriousness offers Germany his “help” in this matter”

“Erdogan of all people. Every third woman in Turkey is forcibly married. State president GÃ¼l married his wife when she was 15. Before he helps, Erdogan ought to see that no Christians are being killed in Turkey.”

This appears on pages 140 and 141 of theÂ Der SpiegelÂ edition that is available today.

At this time, Sabatina James is in demand among church organizations. At the beginning of October, theÂ Catholic Sunday Paper for GermanyÂ published a cover story with quite a few tough quotations.

Last Wednesday she was the invited speaker at the Benedictine Foundation in Munich. This foundation does not wish to make a public impression of being Islam-critical. A caller who would have liked to attend the presentation was told, “We are pro-Islamic.” It was “unfortunately a closed group” to which no outside attendees were invited. There could be no better description of the double standard of such Catholic organizations. They know very well the danger of Islam, but do not wish to express this publicly â€” out of fear, because of political correctness, or in deference to the fraudulent strategy of tolerance and dialogue. At any rate, they listened to what Sabatina James had to say. Later, they will not be able to maintain that they “knew nothing about it.”

2 thoughts on “"Tolerance & Dialogue" With the Intolerant”