Netanyahu’s speech at AIPAC (plus video)

Transcript below the fold!

Following his meeting with U.S. President Obama in Washington on Monday morning, Prime Minister Benjamin Netanyahu, speaking at the AIPAC conference, called on the international community to acknowledge the fact that Iran is developing nuclear weapons.

The mood in the Oval Office was somber and businesslike, as it usually is in meetings between Mr. Obama and Mr. Netanyahu

With a stone-faced Mr. Obama sitting next to him, Mr. Netanyahu said Israel would not pursue a “peace based on illusions.”

This time, the peace process barely figured in the discussions. Â  Â (hahahahah!!)

Netanyahu warned of the dangers of a nuclear Iran. “We need to talk about the cost of not stopping Iran.”

Netanyahu’s speech at AIPAC (plus video)

Thanks to the Elder of Ziyon

This is the transcript of Binyamin Netanyahu’s speech at AIPAC tonight, taken fromÂ his Facebook pageÂ and formatted to be easier to read. 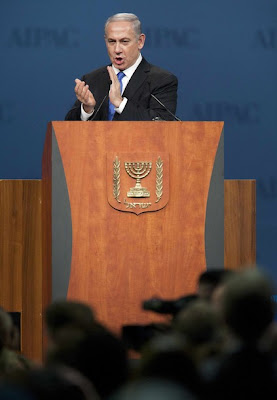 Thank you for the warm reception. It could be heard as far away as Jerusalem â€“ the eternal and united capital of Israel.

More than two thirds of the Congress is in attendance here tonight.

I deeply appreciate your being here.

Last May when I addressed the Congress, you stood up to applaud the state of Israel. Now I ask the 13,000 friends of IL here to stand up and applaud you,Â the representatives of the American people. Democrats and Republicans alike, we applaud your unwavering commitment to Israel.

I want to recognize Yossi Peled who is here tonight. Yossi was born in Belgium. His parents hid him with a Christian family during World War II. His father, and many other members of his family, were murdered at Auschwitz. His mother survived the Holocaust, returned to reclaim Yossi, and brought him to Israel. He became one of Israel’s bravest and greatest generals. And today, Yossi Peled serves as a minister in my government.

Yossi’s life is the story of the Jewish people â€“ the story of a powerless and stateless people who became a strong and proud nation able to defend itself.

And ladies and gentlemen, Israel must always reserve the right to defend itself.

I’d like to talk to you about a subject no one has been talking about recently….Iran.

President Obama has reiterated his commitment to prevent this from happening. He stated clearly that all options remain on the table, and that American policy is not containment.Â Well, Israel has the same policy. We are determined to prevent Iran from developing nuclear weapons. We leave all options on the table. Ad containment is definitely not an option.Â The Jewish state will not allow those seeking our destruction to possess the means to achieve that goal. A nuclear armed Iran must be stopped.

Amazingly, some people refuse to acknowledge that Iran’s goal is to develop nuclear weapons. You see, Iran claims that it’s enriching uranium to develop medical research. Yeah, right. A country that builds underground nuclear facilities, develops intercontinental ballistic missiles, manufactures thousands of centrifuges, and absorbs crippling sanctions â€“ is doing all that in order to advance…medical research. So you see, when that Iranian ICBM is flying through the air to a location near you, you’ve got nothing to worry about. It’s only carrying medical isotopes.

Ladies and Gentlemen, If it looks like a duck, walks like a duck, and quacks like a duck, then what is it? That’s right, it’s a duck –but this duck is a nuclear duck. And it’s time the world started calling a duck a duck.

Fortunately, President Obama and most world leaders understand that the idea that Iran’s goal is not to develop nuclear weapons is ridiculous. Yet incredibly, some are prepared to accept an idea only slightly less preposterous: That we should accept a world in which the Ayatollahs have atomic bombs.

Sure, they say, Iran is cruel, but it’s not crazy. It’s detestable but it’s deterrable.

From the beginning, the Ayatollah regime has broken every international rule and flouted every norm. It has seized embassies, targeted diplomats and sent its own children through mine fields. It hangs gays and stones women. It supports Assad’s brutal slaughter of the Syrian people. Iran is the world’s foremost sponsor of terror. It sponsors Hezbollah in Lebanon, Hamas in Gaza and terrorists throughout the Middle East, Africa, and South America. Iran’s proxies have dispatched hundreds of suicide bombers, planted thousands of roadside bombs, and fired over twenty thousand missiles at civilians. Through terror from the skies and terror on the ground, Iran is responsible for the murder of hundreds, if not thousands, of Americans.

In 1983, Iran’s proxy Hezbollah blew up the Marine barracks in Lebanon, killing 240 American servicemen. In the last decade, its been responsible for murdering and maiming American soldiers in Afghanistan and Iraq. Just a few months ago, it tried to assassinate the Saudi Ambassador in a restaurant just a few blocks from here. The assassins didn’t care that several Senators and members of Congress would have been murdered in the process.

Iran accuses the American government of orchestrating 9/11, and it denies the Holocaust. Iran brazenly calls for Israel’s destruction, and they work for its destruction â€“ each day, every day. This is how Iran behaves today, without nuclear weapons. Think of how they will behave tomorrow, with nuclear weapons. Iran will be even more reckless and far more dangerous.

A nuclear-armed Iran would dramatically increase terrorism by giving terrorists a nuclear umbrella. That means that Iran’s terror proxies like Hezbollah, Hamas will be emboldened to attack America, Israel, and others because they will be backed by a power with atomic weapons.

A nuclear-armed Iran could choke off the world’s oil supply and make real its threat to close the Straits of Hormouz. If you’re worried about the price of oil today, imagine how high oil prices will be when a nuclear-armed Iran starts blackmailing the world.

If Iran gets nuclear weapons, this would set off a mad dash by Saudi Arabia, Turkey, Egypt and others to acquire nuclear weapons of their own. The world’s most volatile region would become a nuclear tinderbox waiting to go off.

The best outcome would be if Iran abandoned its nuclear weapons program peacefully. No one would be happier than me and the people of Israel if Iran actually dismantled its program. But so far, that hasn’t happened.

For fifteen years, I’ve been warning that a nuclear-armed Iran is a grave danger to my country and to the peace and security of the world. For the last decade, the international community has tried diplomacy. It hasn’t worked. For six years, the international community has applied sanctions. That hasn’t worked either. I appreciate President Obama’s recent efforts to impose even tougher sanctions against Iran. Those sanctions are hurting Iran’s economy. But unfortunately, Iran’s nuclear march goes on.

Israel has waited patiently for the international community to resolve this issue.

As Prime Minister of Israel, I will never let my people live under the shadow of annihilation.

Some commentators would have you believe that stopping Iran from getting the bomb is more dangerous than letting Iran have the bomb. They say that a military confrontation with Iran would undermine the efforts already underway, that it would be ineffective, and that it would provoke even more vindictive action by Iran.

I’ve heard these arguments before. In fact, I’ve read them before.

“Such an operation could be executed only by diverting considerable air support essential to the success of our forces elsewhere…..and in any case would be of such doubtful efficacy that it would not warrant the use of our resources….”

And here’s the most remarkable sentence of all. And I quote:

“Such an effort might provoke even more vindictive action by the Germans.”

Think about that â€“ “even more vindictive action” — than the Holocaust.

My Friends, 2012 is not 1944. The American government today is different. You heard it in President Obama’s speech yesterday.

But here’s my point.

The Jewish people are also different. Today we have a state of our own. The purpose of the Jewish state is to secure the Jewish future. That is why Israel must always have the ability to defend itself, by itself, against any threat.

We deeply appreciate the great alliance between our two countries. But when it comes to Israel’s survival, we must always remain the masters of our fate.

In every generation, there are those who wish to destroy the Jewish people. We are blessed to live in an age when there is a Jewish state capable of defending the Jewish people. And we are doubly blessed to have so many friends like you, Jews and non-Jews alike, who love the State of Israel and support its right to defend itself.