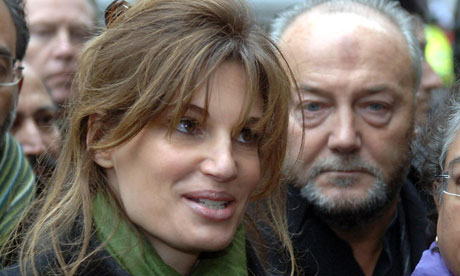 Jemima Khan has alleged that George Galloway has become a Muslim. His third wife says that in the eyes of Islam he is still married to her. Photograph: Eddie Mulholland / Rex Features

Drowned out by the furore over whether George Galloway has indeed become a Muslim asÂ alleged by Jemima Khan, it has been little noticed that soon after his fourth marriage last month his third wife could faintly be heard complaining that in the eyes of Islam he is in fact still married to her. This confusion stems from the brutal truth that few British Muslim marriages have been registered under British law, which means that when the relationship breaks down the female has little if any spousal rights. This is an outrage, condemning thousands of women to a life stuck in limbo and it is time to take action to end this discrimination.

“An increasing timebomb” is how Aina Khan, family law specialist, describes the growth of Muslim marriages that have not been legally registered. It is estimated that 70-75% of Muslim marriages in the UK have not been registered under the Marriage Act. Muslim women and their children have been left open to abuse when they are only registered as having the rights of co-habitants. If their marriage breaks down or her husband dies, women have little recourse as it becomes almost impossible to seek spousal support and even child support. Many are denied equal sharing and the inheritance of wealth and assets accrued in marriage.

The dreadful consequences of this include women being left homeless, with no rights to claim maintenance, and no automatic rights to a share of any property in the other’s name. Many men refuse to have the marriage registered so that they can practise polygamy here in the UK, again leaving the first wife vulnerable. In fact, studies cite this as the fourth most common reason for Muslim marriages ending in divorce.

There is a deeply worrying lack of knowledge about these problems within British Muslim communities. Many Muslim women believe that, like Christian and Jewish marriages, their religious marriage (nikah) is automatically registered, when this is simply not the case. If a Muslim woman wants to get a divorce without having registered her marriage, she has no other recourse than the services of a sharia council, many of whom have been found to have discriminated against women on the basis of their gender. Some women, for example, have been charged twice as much as their husbands would be to obtain an Islamic divorce, regardless of whether they have an income. In many cases, women seeking an Islamic divorce from sharia councils have found themselves imprisoned in the system for three or even five years thanks to the time-consuming and inefficient process.

Many of these problems can be avoided if Muslim marriages are simply registered in the first place and so recognised in British law. Muslim imams and institutions conducting these marriages ought to be at the forefront of educating communities of the importance of registering civil marriages. Currently one in 10 mosques are registered to conduct civil ceremonies â€“ but much more needs to be done. The government should ensure all institutions that conductÂ nikahsÂ are simultaneously conducting civil marriages. The scandal of unregistered marriages and the resulting humiliation British women have endured should not be allowed to continue in 21st-century Britain.