Is there anything that’s not ‘controversial’ these days?

The Gambian government has decided to include the sharia rules into law “to ensure a fair trial in the country”, officials saidÂ in BanjulÂ on Thursday, a move that could spark growing controversy among the people. Â (Global Times)

Njie Saidy, vice president of Gambia, said that the decision would help to promote Gambians’ awareness on the Islamic law governing marriage, divorce and inheritance, to reduce conflicts and violence, and to maintain peace, prosperity and national cohesion.

He might as well knock out his own front teeth……

In other news, from our ‘dumber than dirt’ department:

Don’t blame her for being stupid. Blame the dummies who keep putting her back in office over and over again.Â She clearly has no idea what Sharia Law is, not one single clue.

No black racism to see here. Maxine Waters hates whites more than she loves blacks.Â I would love to see her move to an Islamic country and experience Sharia law firsthand.

She would beg to come back to the “racist” country.

Saidy said Gambian President Yahya Jammeh underscored his government’s commitment to the rule of law in the country.

Gambia’s 1997 constitution recognizes sharia as the Islamic law of Gambia, which is applicable to marriage, divorce and political affairs for the Gambians, and for the first time creates an enabling environment for the cadi court to the Gambians.

The introduction of sharia in the region in 2001 triggered a huge debate between politicians and some erudite Islamic scholars in Gambia.

Minister of Local Government and Lands Lamin Waa Juwara, the former leader of the opposition United Democratic Party, appealed to both Muslims and non-Muslims to reject the introduction of sharia, and has launched a campaign against it in Gambia.

He insisted that sharia was not feasible in Gambia, and believed Gambia had more pressing problems to address than to try to “overturn our secular democratic system that has brought us peace and unity,” he said.

“I do not see how anybody can say that the introduction of sharia will not affect non-Muslims,” he added.

On the contrary, Abdoulie Fatty, imam of the State House Mosque, blamed the non-Muslims for not supporting sharia’s introduction because of their ignorance of the meaning of sharia.

“The introduction of sharia in Gambia would not affect non-Muslims as argued by some critics but help make the society free of terrible incidents,” said Fatty. 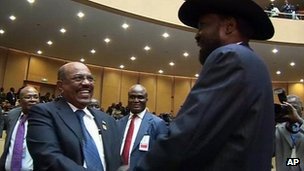 South Sudan has offered its neighbour Sudan more than $3bn (Â£2bn) in compensation for economic losses caused by the South’s independence.

They are holding talks in Ethiopia in a bid to resolve bitter disputes ahead of a UN deadline on 2 August.

Juba also proposes an increased transit fee to move its oil through Sudan and says it will waive its claim to nearly $5bn it says it is owed by Khartoum.

Khartoum has not yet responded to the proposals.

“We are left with nine days [before the UN deadline]. It’s time for the parties to conclude an agreement,” he said.

South Sudan became independent from Sudan just over a year ago, but many disputes between them remain unresolved.

They include border squabbles and disagreements over oilfields, transport payments and divisions of the national debt.

The latest proposal includes compensation of $3.2bn – up from a previous offer of $2.6bn.

South Sudan’s proposal says these disputed areas should be demilitarised and jointly administered until their status is decided upon.

Both countries came close to all-out war when border fighting escalated in April.

The BBC’s James Copnall in Khartoum says that, based on their past positions, the proposals are unlikely to be accepted as they stand.

The Sudanese want considerably higher oil transit fees and are unlikely to accept even temporary joint administration of areas currently under their control, such as the Heglig oilfields, he says.

Khartoum has denied it owes Juba money, which the South says is overdue oil payments and for oil confiscated after independence by Sudan.

However, the latest move appears to have given a fresh impetus to negotiations, our correspondent adds.

The separation between Sudan and South Sudan was part of a peace deal that ended decades of civil war.