Remember the Fox journalists Centanni and Wiig, who were kidnapped and forced to convert to Islam?

Dozens of Gaza Christians staged a rare public protest Monday, claiming two congregants were forcibly converted to Islam and were being held against their will.

FromÂ Ma’anÂ via the Elder of Ziyon 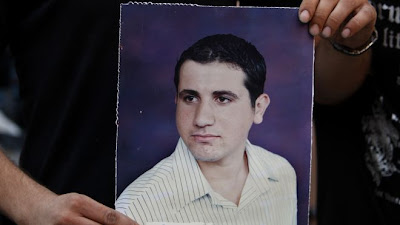 Christians in the Gaza Strip staged a sit-in protest on Monday against the abduction of a young man who his family says was being forced to convert to Islam by an armed group, Ma’an’s correspondent said.

Dozens of Christians protested in the Orthodox church in Gaza City, claiming that a Christian man and two girls had been kidnapped.

Greek Orthodox Archbishop Alexios said a young man, Ramiz al-Amash, was kidnapped by an Islamist group on Saturday after attempts to force him to convert from Christianity to Islam.

He was prevented from calling his family.

“The young man’s parents went to the police to lodge a complaint about the kidnapping of their son, but it did nothing,” Archbishop Alexios said.

Al-Amash’s mother became sick and had to be taken to hospital. The family managed to contact the kidnappers and they took Ramiz to see her surrounded by three jeeps filled with gunmen. They then took him away again to an unknown location.

He is most likely being held in al-Bureij or al-Maghazi refugee camp, Archbishop Alexios said.

“There are some groups trying to persuade young Christians to convert to Islam. They abduct them away from their parents and their families, they threaten them,” he said.

Hamas government spokesman Ayman Batniji said there had been no kidnappings in Gaza, adding that police in the coastal enclave have the utmost respect for Christians.

AP reports it from the Muslims’ perspective:

Dozens of Gaza Christians staged a rare public protest Monday, claiming two congregants were forcibly converted to Islam and were being held against their will.

Protesters banged on a church bell and chanted, “With our spirit, with our blood we will sacrifice ourselves for you, Jesus.”

Gaza police say the two are staying with a Muslim religious official at their request, because they fear retribution from their families converting to Islam. Two mediators said the two — a 25-year-old man and a woman with three children — appeared to have embraced Islam of their free will. Forced conversions have been unheard of in Gaza before.

Since the Islamic militant Hamas seized power five years ago, Christians have felt increasingly embattled, but have mostly kept silent.

There are growing fears among Gaza Christians that their rapidly shrinking community could disappear through emigration and conversions.

Their numbers appear to have shrunk from some 3,500 to about 1,500 in recent years, according to community estimates. They are a tiny minority among 1.7 million Palestinians in Gaza, most conservative Muslims.

“If things remain like this, there’ll be no Christians left in Gaza,” said Huda Al-Amash, mother of one of the converts, Ramez, 25. She sat sobbing in a church hallway alongside her daughters, Ranin and Rinad, and a dozen other women. “Today it’s Ramez. Then who, and who will be next?”

Changing faith is a deeply traumatic affair in the Arab world, where religion is strongly interwoven with people’s identities and tribal membership. To convert often means to be ostracized by the community.

The two converts, Al-Amash, and Hiba Abu Dawoud, 31, could not be reached for comment. Abu Dawould took her three daughters with her, further enraging the community.