Â The Islamic war on free speech, the basis of our liberty, was an inspiration of “regime change” in Libya. And we supported it. 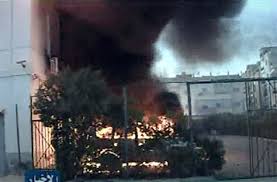 Near the Italian consulate, Benghazi, 2006

Imagine, pre-9/11/12, that you were responsible for arranging the defense of the U.S. Consulate in Benghazi, Libya. Would you have considered American interests and personnel best protected by bringing in a local security outfit called the February 17 Martyrs Brigade?

The question has yet to come up in House hearings, but I think it holds the key to the Obama administration’s betrayal of the American people in “Benghazi-gate.” To an American with common sense not subverted by advanced degrees, the thought of putting Islamic “martyrs” in charge of American “infidels” in Benghazi â€“ which, fun fact, literally means “city of holy warriors” â€“ would trigger the inevitable “heck, no.” And that’s without even knowing what is significant about Feb. 17.

But I’m talking about Washington, D.C. Here, placing the lives of Americans in the hands of a thug-army linked to multiple atrocities and drawn from jihad-epicentral eastern Libya disturbs no collective brain wave. No matter that Benghazi and nearby Derna sent more men, per capita, to Iraq to kill Americans than anywhere else in the world. As far as the Obama administration is concerned, putting local boys in barracks inside the consulate compound was a great idea. Why not? President Obama’s ambassador, the late Christopher Stevens, was, as they say, “reaching out” across the jihad spectrum on official business.

Meanwhile, Ansar al Sharia (“Supporters of Islamic Law”), the al-Qaida-linked militia believed to have led the consulate assault in September, is a spinoff of the February 17 Martyrs Brigade, but that didn’t scratch the lacquered political surface, either. And even as reports remind us of ties among February 17 Martyrs Brigade leadership, the Muslim Brotherhood and the web of jihad-poison spun by Qatar’s Yusuf al-Qaradawi and Libya’s Ali al-Salabi â€“ the latter having been tapped by the Qatari dictatorship to distribute $2 billion to Libyan “rebels” â€“ the focal point remains elsewhere.

Partly, that’s because the breathtaking lies the Obama administration has told us post-9/11/12 distract our attention from the disastrous policy previously in place. Plus, there remains a lingering confusion over good guys and bad guys. After all, Uncle Sam isn’t supposed to support bad guys. The Obama administration, however, threw in Uncle Sam’s lot with bad guys â€“ the “rebels,” the “martyrs,” the Muslim Brothers, the whole jihad-happy crew in Libya and the wider Middle East. Uncle Sam, more or less, crossed to the “other side.” It is this alliance or support for “martyrs” and their sympathizers in Libya, Tunisia, Egypt and Syria that is the betrayal from which Benghazi-gate rises, particularly as our veterans’ cemeteries and hospitals are filled with casualties caused by such “martyrs.”

Whether, as the Daily Beast reported, the February 17 Martyrs Brigade may have been ordered by a pro-al-Qaida Libyan politician to “stand down” for the attack remains to be verified. Meanwhile, the State Department reminds us not to forget the service of two brigade members who were beaten and two who were shot defending the compound. “But there were some bad apples in there as well,” one intelligence source told the Daily Beast.

How could there not be? And here is where the significance of Feb. 17 comes in.

John Rosenthal, an independent journalist based in Europe, wrote early on that the Libyan rebellion wasn’t led only by al-Qaida commanders. This anti-Gadhafi movement was symbolically also an Islamic jihad on Western liberty itself. We know this because, as Rosenthal reported, the “Day of Rage” called for Feb. 17, 2011, to kick off the Libyan civil war was the fifth anniversary of another assault on the West, also in Benghazi.

Following Friday prayers on Feb. 17, 2006, thousands of Benghazians attacked the Italian Consulate to punish the temerity of an Italian minister, Roberto Calderoli, who several days earlier had publicly defended free speech in the West. The world was then experiencing another cycle of Islamic violence, this one orchestrated to punish a tiny Danish newspaper for publishing a sheet of Muhammad cartoons and, in turn, Denmark itself for refusing to punish the journalist-transgressors of Islamic law, which outlaws any critiques and all depictions of Muhammad.

Calderoli didn’t merely defend free speech. During his TV interview, he dramatically unbuttoned his shirt to reveal a T-shirt featuring a cartoon of Muhammad. Referring to Islamic rioters worldwide, he added: “When they recognize our rights, I’ll take off this shirt.” He was forced to resign from his post the next day, a sacrifice on the altar of Shariah (Islamic law) by Prime Minister Silvio Berlusconi. It wasn’t enough.

“We feared for our lives,” the wife of the Italian consul later told the Italian newspaper Corriere della Sera, describing the attack in which the consulate was set on fire. All personnel were safely evacuated. Libyan police used tear gas to try to disperse the rioters, later opening fire and killing 11 attackers.

These are the “martyrs” who serve as role models for the security team that was defending the U.S. Consulate. Symbolically, they figure into the wider war in Libya, which is often called the February 17 Revolution. With this in mind, it becomes clear that the Islamic war on free speech, the basis of our liberty, was an inspiration of “regime change” in Libya. And we supported it.

One thought on “Benghazi, the day the Obama regime joined the jihad”