On a tip from Kathy:

This is what happens when politicians do not support free speech and appease hostile Muslims. May God protect and bless Tommy Robinson,Â Kev Carroll,Â Paul Weston, and all the others who have been arrested on false charges in Britain.

There was a vigil this afternoon in front of the UK embassy in Berlin to protest the arrest and incarceration of Tommy Robinson.

Here’s the text for the occasion, as posted atÂ Europe News:

Solemn vigil in front of the British embassy at 5.30pm in Berlin

Stephen Lennon, known popularly as Tommy Robinson, was arrested on Saturday in the latest act of police harrassment against him. “Tommy” has been given numerous warnings by the police that his life is in imminent danger. But instead of arresting the would-be murderers they persecute him for his political views. He has been exposed to arrest after arrest and has been driven into penury because of his outspoken opposition to sharia. 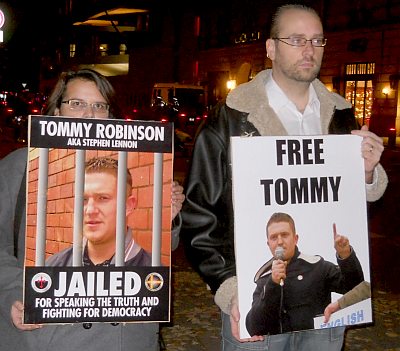 His organisation, the EDL, has been responsible for exposing the sexual ‘grooming’ of girls across the UK. The suffering of these poor children had apparently been ignored due to the British State’s ruling ideology of political correctness. The powers-that-be do not seem to be happy about this. Tommy’s arrest comes at a time when the BBC, that bastion of left wing political power and propaganda in the UK is mired in its own peadophile cover up scandal.

British Freedom Chairman, Paul Weston, concerned about the former Co-Vice-Chairman of his party enquired after him at the prison where he was thought to be held. He too was arrested and taken into custody.

Those that rule the British State are now out of control. All pretense that the British are a free people is ending. How many more dissidents will be rounded up on the flimsiest trumped up charges in the newly emerging British Police State?

Please join me in a moment of silence for the people of that imprisoned island.

One thought on “Solemn vigil for Tommy Robinson in front of the British embassy at 5.30pm in Berlin”