Maine Mayor to New Somali Muslim Refugees: “You Accept Our CultureÂ & Leave Yours At the Door”

PC Tim Cartwright does a ‘too sorry for my shirt’ routine, or something…. but sorry is just not good enough. Australians had enough. We were never asked about Mohammedan infiltration. Reverse it! Â We wanna see action, now!

Assistant police commissioner Tim Cartwright apologises to African immigrants over the release of (true) figures on the high rate of criminality among our Somalian and Sudanese communities. Just is case you thought the police really intended to be frank about ethnic crime in the future.

The story that Cartwright is apologising for to an African interviewer who seems very unwilling to hear the truth, and very quick to play the victim card:

SUDANESE and Somali-born Victorians are about five times more likely to commit crimes than the wider community, a trend that must be addressed to prevent Cronulla-style social unrest, police warn.

The most common crimes committed by Somali and Sudanese-born Victorians are assault and robbery, illustrating the trend towards increasingly violent robberies by disaffected African youths.

‘’We’ve got to fix this now and make sure it doesn’t continue, so the kids who are now 10 years old aren’t in this offender bracket in five years’ time. So we don’t get the Cronullas happening,’’ Victoria Police Deputy Commissioner Tim Cartwright said.

So much of the interview is about how the story got out, how bad the journalist was, what steps would be taken to not have this happen again.

I’d feel a lot more sure that we could overcome this problem if it was admitted to.

Too Much Of A Good Thing

One of the unofficial mottos of the United States, this phrase-which is minted on this country’s coins and emblazoned upon our paper bills-embodies the common heritage of the American nation, which was created from the union of thirteen distinct, unique former British colonies. Over the course of the nineteenth and early twentieth centuries, it came to symbolize the melting pot forged from a collection of people who came to the United States from various European nations in order to reconstitute their lives.

It is a concept that, like many of its inhabitants, has become alien to contemporary America. We now live in a country comprised from aÂ polyglotÂ agglomeration of foreign tribes, individuals and extended families, many of whom would beunable to assimilateÂ to American culture even if a coherent one still existed and they wereÂ encouraged to do so, bothdubious propositions.

One of the most persistent questions raised by the September 11th attacks, and recurring periodically since, e.g. during the debate over the construction of Park 51, the debacle that the trial of Ft. Hood jihadist Nidal Malik Hasan has occasioned, and other terrorist attacks conceived by native or naturalized American citizens, has Â revolved around whether Islam as it’s practiced today can be reconciled with traditional American values embodied in documents like the United States Constitution. 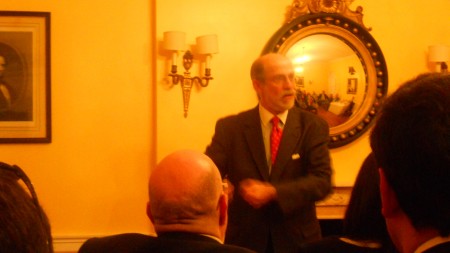 This question is what brought Frank Gaffney, the founder and president of the Center for Security Policy, to the Women’s National Republican Club last week, where he addressed the “civilizational jihad” he asserts Islamists are waging against the United States, as well as the West more broadly conceived. While the sight of Mr. Gaffney delivering a policyÂ address is far from unusual, the fact that the event was hosted by Mark Krikorian of the Center for Immigration Studies reflects a growing recognition among some conservatives-albeit,Â not all-that our nation’s immigration policy has a deep and profound influence upon national security and foreign policy concerns. 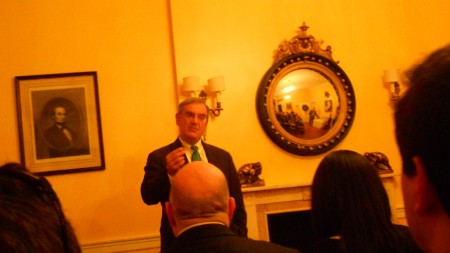 While some believe that the growing diminution of the traditional demographic profile of America will lead to a morepacific, non-interventionist foreign policy-analogizing it to the anti-war sentiment which prevailed in this country before its entry into World War I-it can be argued that the government’s embrace of heretofore foreign ethnic and religious groups will foster anÂ even more aggressive, and in many ways detrimental, foreign policy, which might well endanger American diplomats, servicemen and civilians in the future-as it has in theÂ recent past. What’s more, the union ofÂ multinational jihadist platformsÂ withÂ digital technologyÂ has given an entire generation of Arab, Asian and African Muslim young men who are essentiallyÂ unmoored-having been transplanted to a foreign land at a young age-a distinct cultural and political identity; one which involves the replacement of Western norms and mores with a muscular, revanchist interpretation of Islam. The fact that the dominant legal, cultural, and political class have spent the past five decades attempting to minimize or nullify these very same values speeds their mission.

A perfect illustration of this dilemma was discussed by Frank Gaffney in relation to the Somali community within Minnesota, which now numbers in the tens of thousands. Resettled in previously homogeneous, tranquil parts of the United States at the urging of a United Nations bureaucracy and with the assistance of the U.S. State Department, these refugees have children who are now returning to the homeland of their parents andÂ enlisting in battleÂ against theTransitional Federal GovernmentÂ which our government helped to establish andÂ killing African Union peacekeepersÂ whose mission it ostensibly supports. Beyond the validity of their refugee claims-many of which areÂ wholly fraudulent-there is the inescapable conclusion one must draw that the wealth confiscated from American citizens in the form of taxes-and lavished upon social welfare programs necessitated by the Somalis inability to support themselves or their familiesÂ legally-is being used in some small measure to defray the cost of living of those who intend on blowing other people up.

In addition to the expense-born in our pocketbooks and Â in the gradualÂ erosion of American community-of this experiment, there is the the genuine threat posed by a large segment of migrants who dislike this country both because of specific foreign policyÂ decisionsÂ and concrete Koranic injunctions. It beggars belief that the federal government would seek to import scores of foreigners from third world nations whose populations harbor significant hostility towards America while at the same time another branch of the state engages in nation-building experiments and military operations in those very same lands. The fact that this process isÂ facilitated by the United Nations, a world body whose values areÂ diametrically opposedÂ to those cherished by most Americans, strains credulity.

One of the points emphasized throughout Gaffney’s lecture was the global, multidimensional nature of the jihadist threat. He focused extensively on the case ofÂ a particular individualÂ who was detained while he and his hijab-clad wife filmed the support structure of the Chesapeake Bay Bridge, an incident which would ultimately lead to one of the most critical pieces of evidence introduced during the trial of theÂ Holy Land Foundation,Â at the time the largest Islamic charity in the United States. The HLF was eventually revealed to be not only a financial conduit for Hamas but also part of aÂ network of institutionsÂ within the United States which were created under the auspices of the Muslim Brotherhood in order to achieve their ideological goalsÂ on American soil.

Although it might seem absurd to believe that bedrock American institutions can be undermined by a small coterie of Islamic ideologues, you have to consider the havoc the institutional left has already inflicted upon our society. An Iraqi refugee-with prior criminal offenses-has been charged withÂ maliciously damaging federal propertyÂ for attempting todestroy a Social Security Administration officeÂ with an improvised explosive device! The systematic execution of over a dozen soldiers by Nidal Malik Hasan is deemed a case of Â ‘workplace violence’Â by our federal government. A premeditated jihadist assault on LAX’s El Al terminal is not even consideredÂ a hate crime,Â and the head of the Justice Department cannot even utter the name of the religion whose doctrines inspired the man who attempted toÂ obliterate Times SquareÂ with an explosive device which dwarfed that used in the Oklahoma City bombing.

In this context, it’s not difficult to see how aÂ machiavellian political apparatchikÂ with an outsized influence over the conservative movement, or an influential Democratic congressmen popular among bothÂ leftistsÂ andÂ militant Muslims, or a presidential advisor withÂ dubious tiesÂ to apologists for the Muslim Brotherhood can do permanent harm, especially when constitutional rights likeÂ freedom of speechÂ are being used as bargaining chips in relations withÂ the Muslim world.

The fact that a would-be facilitator ofÂ regicideÂ and terrorist financier was able to enter the good graces of a sitting president and establish a program forÂ Muslim chaplains, which still exists, because of theÂ oleaginous influenceÂ of someone who purports to represent American Muslims illustrates the toxic combination of Â identity politics and K street lobbying. And while some maintain that establishing a pro-Arab/Muslim political infrastructure in this country is necessary to balance the existing pro-Israel bias among American lawmakers, it’s hard to imagine Israelis-regardless of the wisdom of their specific policy views-enacting violent revenge upon Americans for their government’s policy regarding the West Bank or votes on the UN Security Council.

Glenn GreenwaldÂ raises the question of whether Nidal Malik was engaged in an act of terrorism, since-from his perspective, at least-he was fighting those who had enlisted in an army which had attacked his coreligionists in the nation of Yemen. But a more pertinent question is why someone who places allegiance to a foreign religion or a terrorist group in the Persian Gulf above his oath to the U.S. Army, or even his Â obligation not to slaughter unarmed Americans, is in the United States to begin with. Why must theÂ cult of diversityÂ take precedence over the lives of ordinary American citizens?

And the answer is not comforting. It’s because our immigration policy is not designed with the interests of Americans in mind. Our laws are built to satisfy the demand of Â colleges and universities that need the tuition paid by tens of thousands ofSaudi students. Of private and public institutions that demand the addition ofÂ Muslim chaplains,Â regardless ofÂ ideology. Ofparasitical federal contractorsÂ which make a killing by resettling scores of refugees who are aÂ drain on state coffersÂ in towns and cities throughout the country.

The customary response from advocates of changing the cultural landscape of America is that we need to do these things in order to change the hearts and minds of those living in the Islamic world. We need to project an image of openness in order to change theÂ negative imageÂ of the United States overseas. The problem is that it has not worked, and in all likelihood, will never work. Globalization, insofar as it facilitates the exchange of goods and services according to the law of supply and demand, is a good thing. However, importing the maladies, cultural neuroses and obscurantist religious dogmas of foreign cultures for the sake of appeasing the gods of diversity and multiculturalism, even as we engage inÂ questionable foreign interventionsÂ urged on by figures whose interests areÂ inimicalÂ to those of the United States, is madness.

The rotten fruit of theÂ Arab Spring, like that from the most recentÂ war in Iraq, is being brought to our shores, so this is as good a time as any to begin having a conversation about what we want our country’s future to look like. Like Frank Gaffney, I believe it’s time to discontinue theÂ diversity lottery, stop issuing visas to imams for whom there is no demand, and begin to look out for the interests of Americans, first and foremost.