Update from the Gates of Vienna:

The exclusion of the name Muhammad has angered at least one Muslim, and that is Mahmoud Aldebe, Â president of the Foundation for Culture and Integration (OrdfÃ¶rande fÃ¶r stiftelsen kultur och integration) and a former chairman of the Swedish Muslim Association (Sveriges Muslimska FÃ¶rbund).

Aldebe is perhaps best-known for his desire during his time as a centrist (member of the Centre Party) to impose sharia law in Sweden.

Aldebe believes that Coke’s action is discrimination, and it is wrong to exclude the name when, according to him, not only it is associated with religion, but is a common name in Sweden today. The fact that there are hardly any non-Muslim parents who give their children the name Muhammad, Aldebe pretends not to be comfortable about.

“It is the largest Arabic name and it should be more visible,” says Mahmoud Aldebe.

Now imagine just for one moment they would call a coke bottle “Muhammad”. Can you imagine the riots and the grievance theatre that would ensue worldwide?

As part of a Europe-wide campaign, Swedish consumers will get to buy 115 million Coca-Cola bottles that will be relabeled to be called Daniel, Emma, and Johan, among other names plucked from a list of most common names among young Swedes.

Yet despite being among the list of popular names among young men in Sweden, Muhammad isn’t among the names chosen for the Coca-Cola campaign 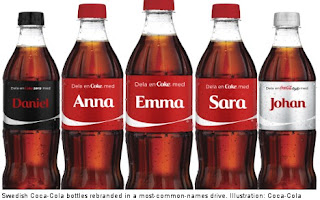 “Symbolically, Coca-Cola is very much associated with the US. We discussed this internally before launching the campaign, and also spoke with the Islamic Association in Sweden,” the company’s Swedish marketing manager Gustaf Wetterwik told the Svenska Dagbladet (SvD) newspaper.

“In the end, we came to the conclusion that it was less provocative not to include the name than to have it on such aÂ US-associated product.“

3 thoughts on “Call it Kacku Kalu Instead!”