Under Obama, the Islamisation of the U.S. proceeds with lighting speed: 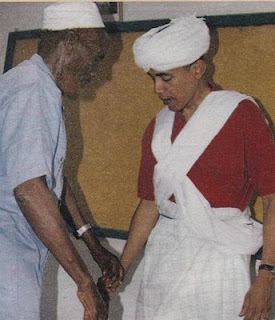 The next approaching scandal for the Obama administration is Islamistgate.

Thanks to Carl in J’lem:

Since taking office, the Obama administration has been telling us that they are reaching out to ‘moderate Muslims.’ I’m sure you’ll all be shocked to hear that’s not what they’ve been doing.Â They’ve been reaching out to the worst of the radicals instead.

You may think that you know about this subject, but the scandal extends far beyond what you have heard.

The majority of these groups and individuals promoted by the Obama administration have been radical Islamists, particularly Muslim Brotherhood cadre, and more than occasionally were people involved in terrorist activity.

Actual moderate Muslims have been neglected and isolated by this project, which has helped the radicals, Islamists, and pro-terrorists gain hegemony in the Muslim community in America.

Again, you may think that you know this story â€” but it is far more extensive than has ever before been revealed. Often, the White House and FBI have granted access and worked with thoseÂ who were simultaneously being investigated on serious charges of terrorism.

The whole “outreach” program has been a farce, and it would be charitable to describe it as incompetence on the part of the Obama administration. Patrick Poole pulls all of the material together for the first time and shows serious flawsÂ that have endangered AmericansÂ in scores of cases.Â Radicals have been given credentials as moderates, been provided with information that should have remained secret, and been allowed to advise and influence U.S. policy. The kind of government mishandling of terrorist threats that characterize the Fort Hood case and the Boston bombing has been business as usual.