The MuBro’s Are the Mothers of Islamic Terrorism

Funny how the combined western lapdog media babbles stupidly about ‘democracy’ and ‘elections’ in support of Â criminal, genocidal lunatics who are now being decimated and outlawed by the Egyptian military. Â Lets hope the military is not quite as fanatical as the Morsi mob. 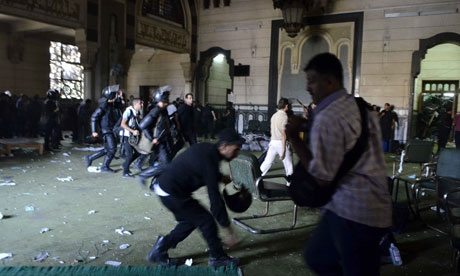 Egyptian state media reported that security forces had cleared the last protesters from the al-Fath mosque.

From the Muslim Issue:

Egypt‘s descent into violent chaos entered a new phase on Saturday as the military-backed government signalled a plan to outlaw theÂ Muslim Brotherhood, while troops cleared a Cairo mosque of Brotherhood supporters who were protesting against the removal of PresidentMohamed MorsiÂ last month.Â Death toll continues to soar, with government saying 173 killed across country on FridayÂ  (The Guardian)

Savages complain about their fellow savages getting roughed up.

“Murdering Christians is a small matter for us”

Obama, EU and Arab funded Muslim Brotherhood commit genocide of Christians in Egypt under fabricated ‘Coptic plot’Â propagandaÂ  —Why is the Obama regime, the EU and the UN whining about Egypt’s revolt Â against t a rigged election that brought the worst kind of terrorists and mass-murderers to power?

“Allah” and other manufactured Mustard grievances

Reblogged from Taking Back America: From American Thinker June 3, 2012Â  |Â Â  By Eileen F. Toplansky In 1997 a huge Muslim outcry ensued that forced Nike to “recall 800,000 shoes because the Muslims claimed the company’s ‘Air’ logo resembled the Arabic script for Allah.”Â  Mind you, the decoration was not the name for Allah.Â  As […]

The MuBros are very active downunder: