“The gunmen told Muslims to stand up and leave. They were safe, and non-Muslims would be targeted.”

But remember: to examine and oppose the ideology that leads to this brutal and wanton mass murder would be “racist.” Â — Robert Spencer

Ten policemen reported killed and over a dozen captured in ambush in previously peaceful Badakhshan province.

Israeli soldier kidnapped and killed by Pal-Arab in West Bank

An Israeli soldier was lured to the West Bank and murdered by a former colleague who plotted to trade his victim’s body for the release of his imprisoned brother, Israeli security forces said.

(Musel-)man wearing Afghan security forces uniform kills three international soldiers in country’s east, coalition says. (it is more than likely that the shooter was not just wearing a uniform, but that he was actually a recruit who was never properly vetted, which is impossible to do due to the ideology).

Just another case of ‘Sudden Jihad Syndrome’. As long as we’re not trying to understand the ideology that causes this our people will be murdered by these savages. Â The attack was the seventh such attackÂ reported this year, and 12 ISAF personnel have been killed.

Our dear ‘friends’, the Pakis:

Sounds like somebody tries to pull the fangs of the islamic snake:

“Rights campaigners” said that the decision, which will apply nationwide unless it is overturned on appeal, comes dangerously close to banning the Quran itself.

Russia’s Council of Muftis sounded the alarm in an open letter on Friday to President Vladimir Putin, who has frequently called for unity among the leading faiths and warned that ethnic tension could tear Russia apart.

Not “ethnic tension”. Islam will do that just like it did in so many other parts of the world. 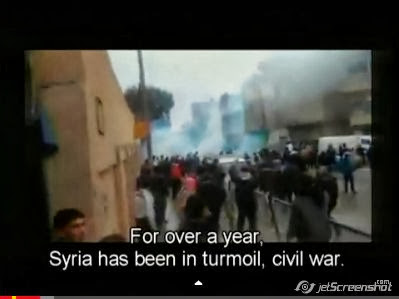 Carl in J’lem has doneÂ twoÂ postsÂ recentlyÂ about Israelis trying to help Syrian refugees in Jordan. Daniel Greenfield reports that a Saudi newspaper hasÂ blasted Israel for those efforts.