“All your Jerusalem are belong to us…”

Today,Â Islamic JihadÂ held aÂ demonstrationÂ against Israel allowing Jews to have anything to do with Jerusalem.Â It does not lookÂ that big, compared to other previous rallies, although perhaps the venue was not as large. 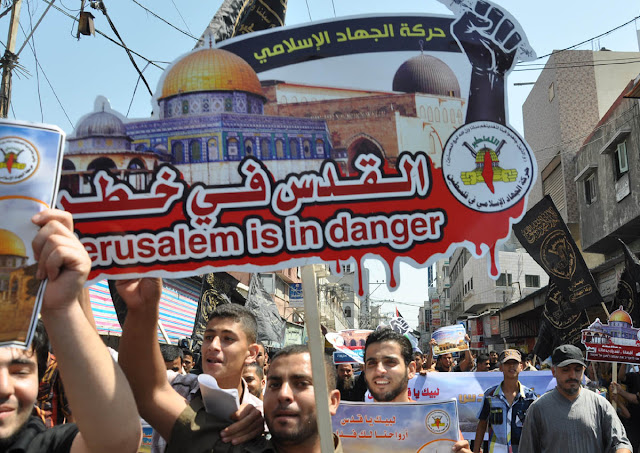 Our first mistake was to allow them or their families into Australia. Our second would be to let them come back again:Â

AN Australian jihadist has reportedly blown himself up in a truck bombing in eastern Syria,amid reports about 70 per cent of Australians fighting with the rebels are known to counter-terrorism authorities.

They are just following their meshugga profit:

The prophet of Islam raided at least nineteen territories in his life, killing the inhabitants. Before each raid he would pray to Allah, who he referred to as ‘Lord of Devils’.

Remember Dahi Khalfan, the Dubai police chief who would go on TV every day talking about his investigation in theÂ murder of Mahmoud Mabhouh?Â Â During the investigationÂ he saidÂ that he would not allow any Jews into the country (translated by English-language media as “Israelis.”)

All of his adventures seem to have given him some grudgiing respect for Jews. On hisÂ Twitter accounttoday, he wrote thatÂ Jews are more trustworthyÂ in business than Arabs are. HeÂ saidÂ Arabs are cheaters and Jews are more credible.

Syrian headbangers, who’d be most assisted by a US strike on the Syrian regime,Â behead four more captives. Warning. Graphic content.

From the Muslim Issue:

Labor in government created the Left-wing Grattan Institute, funded the new Left-wingÂ The ConversationÂ and presided over the expansion of the Left-wing ABC.

It staged a show-trial into the “hate media” that criticised it, threatened newspapers which dug into Julia Gillard’s past and proposed new laws for a state-backed media censor.

But only now that a conservative government replaces one of the Left does Fairfax writer Gay Alcorn suddenly call a halt to the culture war – by which she actually means the Left’s advances should not now be reversed:

Mr Abbott, Â please spare us a rerun of the ‘’culture wars’’.

Spoken like a true Leftist. Only conservatives have a bias. Leftists propose “reforms”, but conservatives only want “war”.–Left wants armistice in the culture war (Andrew Bolt)

The traditional political parties in the UK are the Conservative, Labour and Liberal Democrat parties. On key issues such as the European Union, uncontrolled mass immigration and the threat of Islam, it has been proven that they all have ineffective liberal policies, act without mandates and do not listen to the consensus of the British public. … Â Â By: Paul Wilkinson/Â Cherson and Molschky/ thanks to Mullah

They are only doing allah’sÂ handiwork. The real problem is Spencer-Geller and Â the ever present “Islamophobia”

Why wait for houris when you can have virgins here and now?

Nothing to do with Islam?

“If Christianity and Judaism cannot be mentioned with terrorism, then our noble religion Islam cannot be deflamed [sic] this way either.”

Only Muslims are human. The rest is dumb, deaf and blind and lower than animals. Resisting Islam is therefore “criminal”.
He hasÂ said this before. However often he repeats it, it will still ring hollow. His deputy Bulent Arinc said: “If Christianity and Judaism cannot be mentioned with terrorism, then our noble religion Islam cannot be deflamed [sic] this way either.”
The absurdity of this is self-evident. It is based on the fundamental false assertion of the “Islamophobia”-mongers: that it is non-Muslim “Islamophobes,” not jihad terrorists, who link Islam with terrorism, and that the link is an incidental one, when actually those jihadis explain that they committed their murders because of Islamic imperatives. The primary imperative of the entire “Islamophobia” initiative is to shift that blame and obscure how jihad terrorists invoke Islam, and to intimidate the West into criminalizing honest discussion of jihad and Islamic supremacism.
“Islamophobia is as dangerous as racism: Turkish PM,” from theÂ World Bulletin, September 12 (thanks to Jerk Chicken):

Turkish Prime Minister Recep Tayyip Erdogan said on Thursday that Islamophobia was a kind of racism such as the other forms of discrimination by describing the term as a crime against humanity. 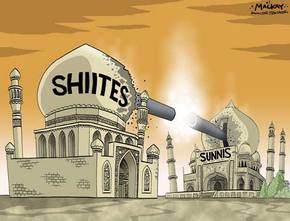 Â Meanwhile, Turkey’s Erdogan repeated his earlier charge that “Islamophobia” was a “crime against humanity.” He didn’t say anything about Sunni-Shi’ite jihad violence. Yet which has killed more people?

More evidence that universities in the U.S. today are centers for Leftist/Islamic supremacist indoctrination, with no interest in truth whatsoever. “Israel hand-written onto new map by SDSU professor,” by Cristin Severance forÂ 10News.com, September 12

One World Ruled by UN Despots?

How dare the U.S. of A. uphold individual rights and values!

Â From “stand your ground” laws to voter-ID, from drone strikes to NSA surveillance, from profiling of Muslims to continued detentions at Guantanamo Bay, the U.S. government’s positions on a wide range of issues will be placed under a United Nations’ spotlight next month.Â U. N. Human Rights Panel Prepares to Challenge U.S. Domestic Policies –

Syria: Yes, they are all bad guys

…and they are not “secular”

One thought on “Yom Kippur Jihad”