There is a massive media cover up about the persecution and murder of people of all faiths around the globe by fanatical Muslims. Â Even Fox does not cover this. The message is found on the internet, on wesites like this, BNI, Atlas Shrugs and Jihad Watch.

CAIR is working tirelessly to shut Pamela Geller and other true patriots up. Their deep pockets and government support makes speaking out about jihad a dangerous and expensive endeavor.

God bless Pamela Geller, Robert Spencer and all of the courageous Americans who continue to fight evil by telling the truth.

YOU DON’T SEE THIS ON THE NEWS DO YOU?

CHRISTIANS ARE BEING SLAUGHTERED BY THE THOUSANDS WITH NO HELP FROM BRITAIN, NOT EVEN MEDIA ATTENTION

Nigeria Muslim kill these people because of their faith.

May G-d have mercy on Christians all over the world who live in muslim countries, Amen. 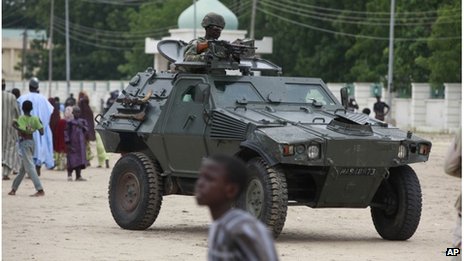 Suspected Boko Haram militants have engaged security forces in a lengthy gun battle and raided a hospital in the northern Nigerian city of Damaturu.

Residents told the BBC that it was a “big, audacious attack” and that assailants stole drugs from the hospital and drove off in ambulances.

Meanwhile, the military said it had killed 74 suspected Boko Haram militants in a raid in Borno state.

Authorities have recently stepped up their campaign against the militants.

North-eastern Nigeria is the focus of an insurgency by the group that began in 2009 and aims to create an Islamic state.

President Goodluck Jonathan urged the military to up its campaign against Boko Haram five months ago.

Damaturu is the main city in Yobe state, which lies to the west of Borno. It has been calm for more than a year, and there is a large military presence in there.

‘Slow response’Nonetheless, gunfire rocked the city for some seven hours after a group of about 20 gunmen – some in military uniform – targeted the hospital late on Thursday.

Clashes between militants and the security forces spread to other parts of the city. A health worker described seeing a police vehicle ferrying corpses to the mortuary.

The resident who described the attack as “audacious” said the gunfire was heavy, continuous, and loud.

He also said that people in Damaturu were surprised that it had taken the military at least an hour to respond.

Authorities later imposed a 24-hour curfew, and streets were deserted on Friday.

Lt Dole said the latest raid had been carried out on Thursday and that two soldiers had been wounded.

The BBC’s Will Ross reports from Nigeria that it seems surprising that Boko Haram camps are still being found, given all the resources available to the army.

The army’s claims about military operations against the group are hard to verify – there has been no mobile phone network in Borno state since the latest offensive was launched.

Nigeria’s campaign has been criticised by human rights groups.

Amnesty International said earlier this month that hundreds had died in detention in north-eastern Nigeria, some from starvation or extra-judicial killings.

Nigeria’s interior said the report was “not true”.

More on This Story

Militants with a cause

And where does all this come from? Why, from the Koran of course:

I’m all for the public’s having a better understanding of the Qur’an. Understand this:

“And well you know there were those among you [Jews] that transgressed the Sabbath, and We said to them, ‘Be you apes, miserably slinking!’

“And slay them wherever you come upon them, and expel them from where they expelled you; persecution is more grievous than slaying. But fight them not by the Holy Mosque until they should fight you there; then, if they fight you, slay them — such is the recompense of unbelievers, but if they give over, surely Allah is All-forgiving, All-compassionate. Fight them, till there is no persecution and the religion is Allah’s; then if they give over, there shall be no enmity save for evildoers.”

3:28 Don’t take unbelievers as friends and allies, unless it is for “fear of them,” i.e. deceptively for protection of oneself or of Islam

“Let not the believers take the unbelievers for friends, rather than the believers — for whoso does that belongs not to Allah in anything — unless you have a fear of them. Allah warns you that You beware of Him, and unto Allah is the homecoming.”

“You are the best nation ever brought forth to men, bidding to honour, and forbidding dishonour, and believing in Allah. Had the People of the Book believed, it were better for them; some of them are believers, but the most of them are ungodly. They will not harm you, except a little hurt; and if they fight with you, they will turn on you their backs; then they will not be helped. Abasement shall be pitched on them, wherever they are come upon, except they be in a bond of Allah, and a bond of the people; they will be laden with the burden of Allah’s anger, and poverty shall be pitched on them; that, because they disbelieved in Allah’s signs, and slew the Prophets without right; that, for that they acted rebelliously and were transgressors.”

“We will cast into the hearts of the unbelievers terror, for that they have associated with Allah that for which He sent down never authority; their lodging shall be the Fire; evil is the lodging of the evildoers.”