The Churches of Satan. Would it surprise you if “Lady” Ashton was a member? 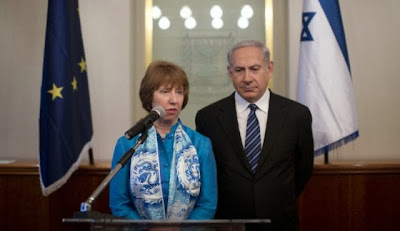 The European Union is funding a conference by an Israeli fringe group called Zochrot, which would replace Israel with a ‘binational state’ – a concept that doesn’t exist in the Middle East (for example, Syria is now tearing itself apart through tribalism) – that would be flooded with ‘returning’ ‘Palestinian refugees.’ I discussed theÂ Zochrot conferenceÂ when it was announced in August. What’s new here is theÂ European fundingÂ that Zochrot receives, without which it would not exist.

Israeli one-state advocates are so few that they have neither a constituency nor influence in Israel. For Zochrot, foreign funding is their lifeline; the conference was “made possible thanks to the generous support of: Misereor, Christian Aid, HEKS-EPER, CCFD, Finn Church Aid, Broederlijk Delen, AFSC, Rosa Luxemburg Foundation, Mennonite Central Committee, TrÃ³caire, St. Het Solidariteitsfonds, Oxfam GB and private donors.”

NGO Monitor wrote each of the sponsors, and we received several replies.

France’s CCFD and Germany’s Misereor (both Catholic) wrote identical messages – including the same grammatical mistakes. They affirmed they are a “funding partner of Zochrot” and declared “refugee issues and refugee rights all over the world are of utmost importance to us.” But regarding funding they opted for fogginess: “Our privacy policies do not allow to disclose (sic) the amounts given to recipients.”

Belgium’s Broederlijk Delen, also Catholic, wrote a similar response: “We support the work of Zochrot as we believe refugee rights are important in any context and should be openly discussed.”

But regarding funding, they also chose murkiness: “With regard to details on funding, we wish to respect our partners’ privacy.”

What seems to be lost on these Christian groups is they are supported by public funds.

As for the one-state formula itself, the onus for proving that this “solution” is workable is on the shoulders of its advocates. In Europe binational states have an unhappy history.

Czechoslovakia was one state, now it is two. Yugoslavia’s multi-national experiment ended in a horrific war that gave the world the term “ethnic cleansing.” Belgium, Spain and the UK each have strong national separatist movements (Flemish, Basque and Scottish respectively).

IN THE Middle East, the region most relevant to this discussion, concrete models of binational entities do not exist. The rights of non-Arab and non- Muslim minorities in Arab states are severely repressed, sectarianism is rending Syria, Iraq and Lebanon asunder, and the upsurge of violence against the region’s Christians should serve as a warning. Israel is the only Middle East country where democratic institutions are strong and minorities enjoy by right the full protection of the law.

Yet, these Christian funders are targeting Israel, and appear to be utterly unaware of the plight of their Middle Eastern coreligionists. What makes them think that Jews would fare better as a minority once Israel is forced to be a Muslim-majority state than do Christians today in Egypt, Syria or Iraq? This point is all the more pertinent considering the ethnic cleansing by Arab governments of 99 percent of their Jewish citizens after 1948. After Arab governments stripped them of their citizenship and property most Jewish refugees fled to Israel.

That two refugee populations resulted from the Arab-Israeli conflict, one Jewish, one Arab, is ignored by this conference’s organizers and funders. With all their moralistic rhetoric of refugee rights being “of utmost importance” “in any context,” these Christian groups are mute about the rights of nearly a million Jewish refugees from Arab states, and millions of their descendants.

Given that we’re talking about European Christians, it’s far more likely that they are well aware of the plight of their coreligionists throughout the Middle East, and that they would be very happy to see all the Jews murdered as well.

As for the European Union, I’m sure that they too are well-aware of what and whom they are funding.