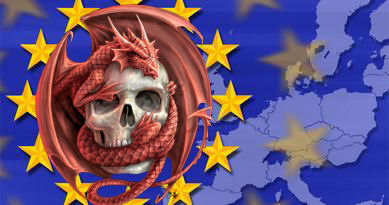 Â From Hammerfest on the Barents Sea to Lampedusa in the Mediterranean, from Stornoway in the Outer Hebrides to Skyros in the Aegean, an “Iron Curtain” of oppression has descended across the European continent. Within that line lie all the capitals of the ancient states of Western Europe. Dublin, London, Copenhagen, Oslo, Stockholm, Helsinki, Paris, Amsterdam, Berlin, Vienna, Rome, Madrid, and Lisbon: all these famous cities and the populations around them lie in what I must call the EUSSR sphere, and all are subject, in one form or another, not only to totalitarian influence but to a very high and in some cases increasing measure of control from Brussels.

So might Sir Winston Churchill have written about the increasing suppression of free speech in Europe, if he were alive today.

Whether the impetus comes fromÂ Resolution 16/18 of United Nations Human Rights Council, a “broader interpretation” ofÂ Article 20 of the International Covenant on Civil and Political Rights, or the internal rulings of the European Commission, the current momentum in the European Union is towards an ever-tighter stranglehold on the civil liberties of European citizens â€” with a particular emphasis on “religious intolerance”, needless to say.

JLH has translated an excellent op-ed by the Austrian writer Andreas Unterberger about the new fascism that is now unfolding in the European Union. The translator includes the following introductory note:

I am reminded of my first year translating for Gates of Vienna, when I encountered constant evocations of the Enlightenment. I understood them, to be sure, but I was not used to such frequent references. It reminded me that our Founders were Enlightened men, and that forgetting that is to think of ourselves in isolation instead of as the culmination of a long process.

And we are in danger of once again following the lead of Europe, but this time to our detriment and to the ultimate destruction of what we are pleased to call “American exceptionalism.” What for so long has separated us from ever-present totalitarian thinking is now worn to a thin veneer of lip-service. Whether the ultimate Orwellian gloom will be tinged red with the blood of the gulags or the blood of jihad will probably not matter to the victims in the coming generations.

A Union Destroys Its Values

Penalties for those parties that do not represent the values of the EU! This demand by European Socialists is finding wide agreement in the EU Commission. One thing is clear, however. Should Europe really introduce such penalties, it will ultimately leave the path of constitutional statehood, for that state builds upon ideological neutrality, as it has been embodied quite value-free in the Austrian constitution for almost a hundred years. The moment this neutrality is abandoned, all doors are thrown open to a new totalitarianism.

This move in the direction of criminalization is so much riskier, since there are groups in the EU parliament who style themselves “liberal,” to be sure, but actually have great sympathy for such ideas of value control.

Any criminalization of opinions and values is a severe blow to the real, fundamental, liberal principles of the Enlightenment and all of the consequent revolutions and constitutions. The greatest demand of the Enlightenment was its call for freedom of expression. In Voltaire’s formulation: Even if I completely reject the content of what someone says, I shall (as a freedom-loving individual as well as a constitutional state) do all I can to allow him to broadcast that content. Freedom of expression only for those who think the same as we do is nothing but a caricature.

To emphasize the necessity of genuine freedom of expression, think of the history of the last couple of centuries, when there was no freedom of expression. In the era of Maria Theresa, even going to mass was monitored. In the Nazi era, it was compulsory to support the Nazis’ nationalistic, anti-Semitic and racist “values.” Then, until 1989, half of Europe had to have the “values” of class warfare and the exploitative build-up of socialist societies. In truth, regimes were protecting their own power.

Now there is the menacing system of “European values.” Already several verdicts in the highest European courts (in Luxembourg as in Strasbourg) have been shaped in the spirit of a power elite who wish to compel politically correct thinking and speaking at the cost of freedom of expression. In the future, politics (or at least a part of the political class) will once again control our very thoughts.