The Dutch television program “Een Vandag” has announced that Geert Wilders, the leader of the Party for Freedom (PVV), is theÂ politician of the year in the NetherlandsÂ (in Dutch).

According to the PVV:

Geert Wilders Politician of the Year in the Netherlands 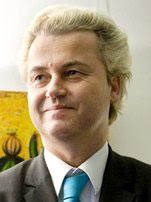 For many months, the PVV has been the largest party in the Dutch polls.

The party is an outspoken opponent of the tax and austerity policies of the Dutch government. Mr Wilders and his party are also indomitable defenders of Western freedoms, such as freedom of speech. These freedoms are threatened by the process of Islamization that is currently going on in the Netherlands and other nations.

They make it sound as if nationalism was a bad thing.

The Leader of Dutch ultranationalist party for Freedom (PVV) Geert Wilders, who altered the Sauda Arabian flag in a slir campaign against Islam and subsequently offered to distribute it as a free sticker was condemned by the Dutch government and opposition parties.

Wilders altered the Saudi flag using the Arabic alphabet to include insults to Islam. He stuck the flag to the door of his office in parliament and urged Dutch society to do the same. Wilders has campaigned to stop what he views as the “Islamisation of the Netherlands and Europe”. He was acquitted of charges for “hate speech against Muslims” in 2011 by the Dutch court.

Wilders is the producer and promoter of film “Fitna” which displays images from 9/11 and the 2004 Madrid attack with Qur’anic verses. The film was condemned globally and found provacative.

His recent actions have received widespread condemnation and is seen as a clear insult to Muslims. “The government doesn’t approve these acts and does not support Wilders by any means,” said Dutch FM Frans Timmermans.

Dhimmies will be dhimmies. Traitors are traitors. Wilders will soon be the government, wait and see!

Deputy PM Lodewijk Asscher defined the act as “dreadful”. He said Wilders’s motivation was to offend people, and the Muslims that contribute to Dutch society do not deserve it.

These people are on the wrong side of history.

The learder of the Labor Party (PvdA) Hans Spekman and leader of Greens (GL) Bram Ojik spoke out against Wilders’s insults.

Which proves once again that the Greens are sailing under false flag.

2 thoughts on “Geert Wilders, Dutch Politician of the Year, “condemned for insults on Islam””