Next year he will walk on water:

WAR ON INCOME INEQUALITY…Â ‘Upward Mobility Has Stalled’…’Wherever I Can Take Steps To Expand Opportunity For Families, That’s What I’m Going To Do’…Â ‘GIVE AMERICA A RAISE’…
FULL TEXT…Â WATCH…Â HIGHLIGHTS…

“Climate Change is a fact”

Spare me the drivel. And the lies. Lies and more lies.

You couldn’t Â keep up with all the falsehoods in this speech.

What he did to the Sergeant is sick. He used him as a political tool.

A look at some of the facts and political circumstances behind his claims, along with a glance at the Republican response.

In State of the Union address, US Muslim POTUS says 2014 should be the year to finally close the US prison.

President Barack Obama told Americans that 2014 should be the year to finally close the US prison at Guantanamo Bay as the United States winds down its military role in Afghanistan and shifts away from a “permanent war footing”.

Mark Levin: Who Exactly is Hussein Obama aka Barry Soetoro?

Valerie Jarrett Orders Companies To Start Hiring – Or Else…

Way underreported by the Mainstream Media:Â de facto President Valerie Jarrett made personally to a number of large corporationsÂ days beforeÂ Barack Obama’s State of the Union speech tonight.Â  The gist of that call was this – either you start hiring workers NOW, whether you need them or not, or the administration might just have to take another look at your business practices.Â  IRS anyone?Â  How about the SEC?Â  NSA?Â  FBI?Â  You name, we got it, so break out your wallet and make our employment numbers look better, OR ELSE.

In the nation’s history, there is simply no precedent for an American president so wantonly ignoring federal law.

Of all the troubling aspects of the Obama presidency, none is more dangerous than the president’s persistent pattern of lawlessness, his willingness to disregard the written law and instead enforce his own policies via executive fiat. On Monday, Mr. Obama acted unilaterally to raise the minimum wage paid by federal contracts, the first of many executive actions the White House promised would be a theme of his State of the Union address Tuesday night. (More below the fold)

The president’s taste for unilateral action to circumvent Congress should concern every citizen, regardless of party or ideology. The great 18th-century political philosopher Montesquieu observed: “There can be no liberty where the legislative and executive powers are united in the same person, or body of magistrates.” America’s Founding Fathers took this warning to heart, and we should too. 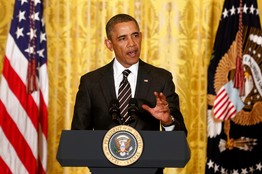 At a White House reception for U.S. mayors, Jan. 23.Reuters

Rule of law doesn’t simply mean that society has laws; dictatorships are often characterized by an abundance of laws. Rather, rule of law means that we are a nationÂ ruledÂ by laws, not men. That no oneâ€”and especially not the presidentâ€”is above the law. For that reason, the U.S. Constitution imposes on every president the express duty to “take Care that the Laws be faithfully executed.”

Yet rather than honor this duty, President Obama has openly defied it by repeatedly suspending, delaying and waiving portions of the laws he is charged to enforce. When Mr. Obama disagreed with federal immigration laws, he instructed the Justice Department to cease enforcing the laws. He did the same thing with federal welfare law, drug laws and the federal Defense of Marriage Act.

On many of those policy issues, reasonable minds can disagree. Mr. Obama may be right that some of those laws should be changed. But the typical way to voice that policy disagreement, for the preceding 43 presidents, has been to work with Congress to change the law. If the president cannot persuade Congress, then the next step is to take the case to the American people. As President Reagan put it: “If you can’t make them see the light, make them feel the heat” of electoral accountability.

President Obama has a different approach. As he said recently, describing his executive powers: “I’ve got a pen, and I’ve got a phone.” Under the Constitution, that is not the way federal law is supposed to work.

There is no example of lawlessness more egregious than the enforcementâ€”or nonenforcementâ€”of the president’s signature policy, the Affordable Care Act. Mr. Obama has repeatedly declared that “it’s the law of the land.” Yet he has repeatedly violated ObamaCare’s statutory text.

The law says that businesses with 50 or more full-time employees will face the employer mandate on Jan. 1, 2014. President Obama changed that, granting a one-year waiver to employers. How did he do so? Not by going to Congress to change the text of the law, but through a blog post by an assistant secretary at Treasury announcing the change.

The law says that only Americans who have access to state-run exchanges will be subject to employer penalties and may obtain ObamaCare premium subsidies. This was done to entice the states to create exchanges. But, when 34 states decided not to establish state-run exchanges, the Obama administration announced that the statutory words “established by State” would also mean “established by the federal government.”

The law says that members of Congress and their staffs’ health coverage must be an ObamaCare exchange plan, which would prevent them from receiving their current federal-employee health subsidies, just like millions of Americans who can’t receive such benefits. At the behest of Senate Democrats, the Obama administration instead granted a special exemption (deeming “individual” plans to be “group” plans) to members of Congress and their staffs so they could keep their pre-existing health subsidies.

Most strikingly, when over five million Americans found their health insurance plans canceled because ObamaCare made their plans illegalâ€”despite the president’s promise “if you like your plan, you can keep it”â€”President Obama simply held a news conference where he told private insurance companies to disobey the law and issue plans that ObamaCare regulated out of existence.

In other words, rather than go to Congress and try to provide relief to the millions who are hurting because of the “train wreck” of ObamaCare (as one Senate Democrat put it), the president instructed private companies to violate the law and said he would in effect give them a get-out-of-jail-free cardâ€”for one year, and one year only. Moreover, in a move reminiscent of Lewis Carroll’s looking-glass world, President Obama simultaneously issued a veto threat if Congress passed legislation doing what he was then ordering.

In the more than two centuries of our nation’s history, there is simply no precedent for the White House wantonly ignoring federal law and asking private companies to do the same. As my colleague Democratic Sen. Tom Harkin of Iowa asked, “This was the law. How can they change the law?”

Similarly, 11 state attorneys general recently wrote a letter to Health and Human Services SecretaryÂ Kathleen SebeliusÂ saying that the continuing changes to ObamaCare are “flatly illegal under federal constitutional and statutory law.” The attorneys general correctly observed that “the only way to fix this problem-ridden law is to enact changes lawfully: through Congressional action.”

In the past, when Republican presidents abused their power, many Republicansâ€”and the pressâ€”rightly called them to account. Today many in Congressâ€”and the pressâ€”have chosen to give President Obama a pass on his pattern of lawlessness, perhaps letting partisan loyalty to the man supersede their fidelity to the law.

But this should not be a partisan issue. In time, the country will have another president from another party. For all those who are silent now: What would they think of a Republican president who announced that he was going to ignore the law, or unilaterally change the law? Imagine a future president setting aside environmental laws, or tax laws, or labor laws, or tort laws with which he or she disagreed.

That would be wrongâ€”and it is the Obama precedent that is opening the door for future lawlessness. As Montesquieu knew, an imperial presidency threatens the liberty of every citizen. Because when a president can pick and choose which laws to follow and which to ignore, he is no longer a president.

Mr. Cruz, a Republican senator from Texas, serves as the ranking member on the Senate Judiciary Committee’s Subcommittee on the Constitution, Civil Rights and Human Rights.

2 thoughts on “Obummer. Unwatchable. Hard on the Brain.”